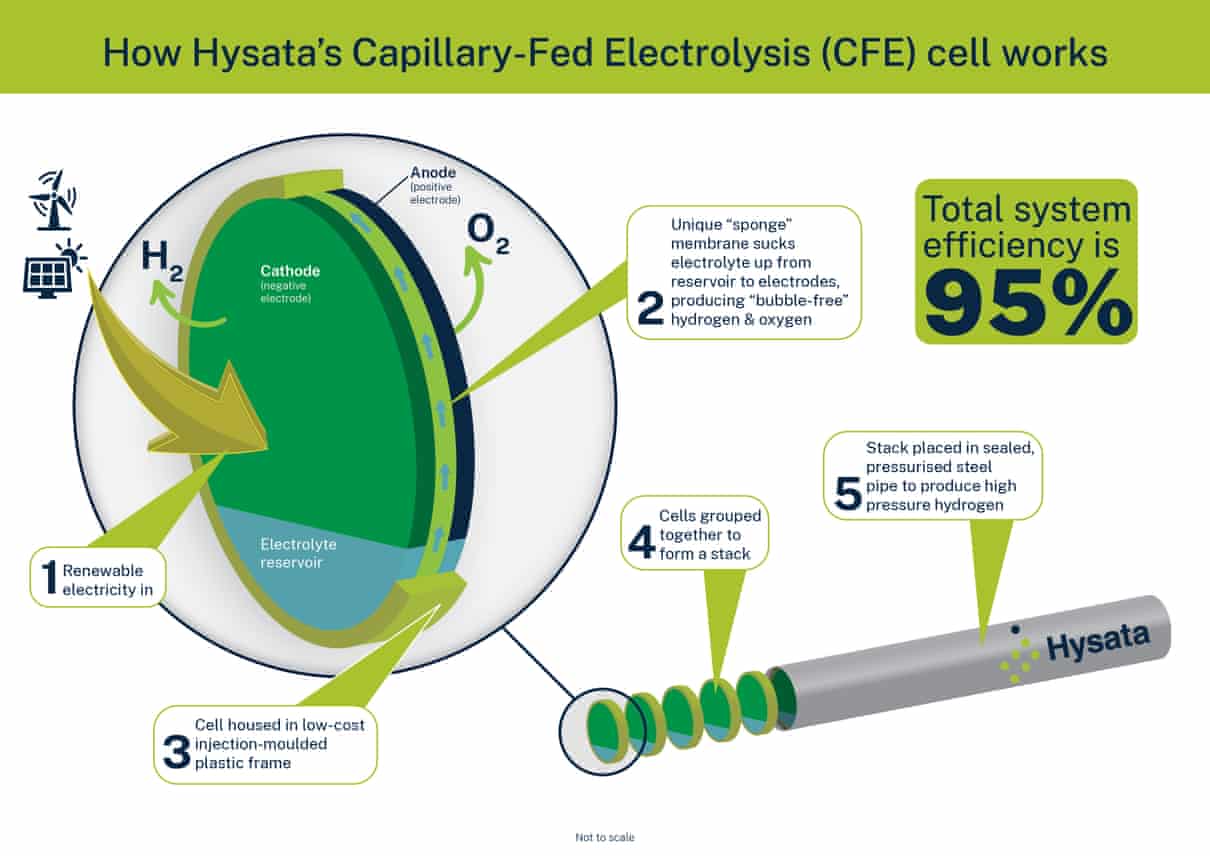 Morrison government’s hydrogen stretch goal of $2 a kilogram to make the fuel competitive could be reached by 2025, Hysata says.

Australian researchers claim to have made a “giant leap” in lifting the efficiency of electrolysers, bringing forward the time when green hydrogen will be competitive with fossil fuels as an energy source.

At stake is potentially an industry worth trillions of dollars. According to the government’s national hydrogen strategy released in 2019, a “cautiously optimistic scenario” could see an Australian hydrogen industry generate about 7,600 jobs and add about $11bn a year in additional GDP by 2050” or another 10,000 jobs and $26bn annually if markets develop faster.

The achievement, published in the peer-reviewed Nature Communication journal today, could see the Morrison government’s so-called hydrogen stretch goal of $2 a kilogram to make the fuel competitive reached as soon as 2025, the Hysata chief executive, Paul Barrett, said.

“We’ve gone from 75% [efficiency] to 95% – it’s really a giant leap for the electrolysis industry,” Barrett said.

Renewable energy from sources such as wind and solar is making big inroads into the power sector, supplying more than a third of eastern Australia’s electricity in the final three months of 2021. However, decarbonising industry and some transport, such as trucking, is likely to be tougher unless fuels such as hydrogen become much cheaper.

Gerry Swiegers, Hysata’s chief technology officer and a UoW professor, said electrolysis – which uses electricity to split water into hydrogen and oxygen – had been around for two centuries with mostly only incremental improvements in processing.

The central challenge was to reduce the electrical resistance within the electrolysis cell. Much like a smart phone battery warming as it charges, resistance wasted energy in a regular cell as well as often requiring additional energy for cooling.

“What we did differently was just to start completely over and to think about it from a very high level,” Swiegers said. “Everyone else was looking at improving materials or an existing design.”

With the help of two PhD researchers – Aaron Hodges and Anh Linh Hoang – the small team used readily available materials to develop a thin sponge-like membrane to suck the water up between two electrodes. The avoidance of creating bubbles was also key.

“So a combination of that wicking membrane and that bubble-free operation resulted in inherently low resistance,” Barrett said. Hydrogen could be produced using 41.5 kilowatt-hours of electricity per kilogram.

“For hydrogen producers, this will significantly reduce both the capital and operational costs to produce green hydrogen,” he said, adding the efficiency levels achieved were “the best in the world”.

From an initial concept in 2019, the research has advanced quickly. With $4.25m from UK-based IP Group and $750,000 from Australia’s Clean Energy Finance Corp, Hysata is now looking to begin a pilot manufacturing site of electrolysis plates – each 250mm in diameter – by the end of 2023.

“We want to help Australia build core electrolyser technology,” Barrett said, adding the plan would be to build a plant capable of producing one gigawatt of electrolysers a year. Similar-sized plants for elsewhere in the country and beyond would follow as the production techniques were mastered.

Hysata is hiring more staff to add to its 20-strong team, with a plan for a fundraising announcement in the second half of 2022, Barrett said.

At stake is potentially an industry worth trillions of dollars. According to the government’s national hydrogen strategy released in 2019, a “cautiously optimistic scenario” could see an Australian hydrogen industry generate about 7,600 jobs and add about $11bn a year in additional GDP by 2050” or another 10,000 jobs and $26bn annually if markets develop faster.

“I’m very excited about this project,” Swiegers said. “I think this really gives us a chance to get to net zero [carbon emissions] potentially earlier than expected.”