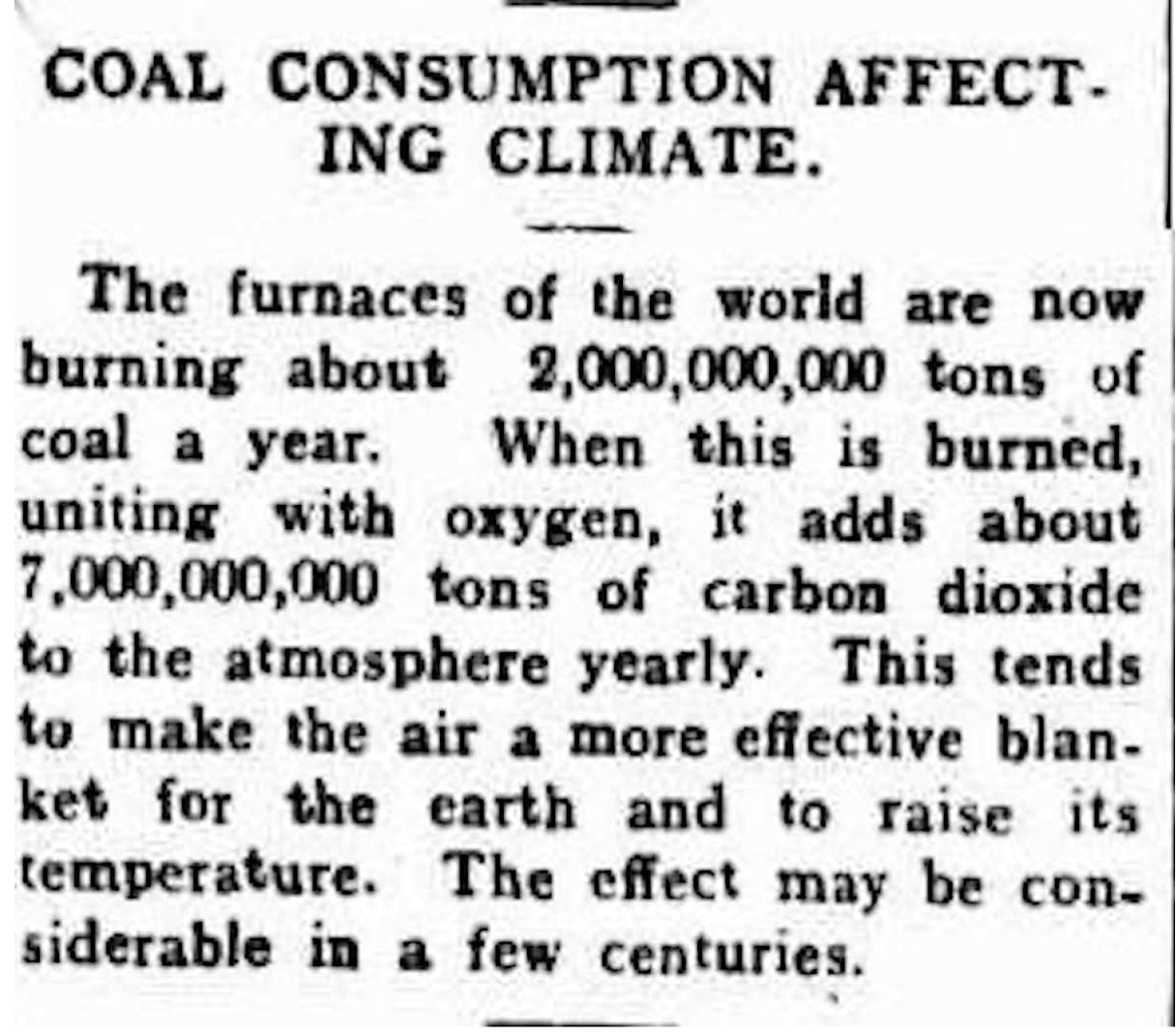 Image: This short 1912 article made the direct link between burning coal and global temperature changes. The Braidwood Dispatch and Mining Journal, National Library of Australia

This piece from 110 years ago is now famous, shared across the internet this time every year as one of the first pieces of climate science in the media (even though it was actually a reprint of a piece published in a New South Wales mining journal a month earlier).

So how did it come about? And why has it taken so long for the warnings in the article to be heard – and acted on?

The fundamental science has been understood for a long time

Her rudimentary experiments showed carbon dioxide and water vapour can absorb heat, which, scaled up, can affect the temperature of the earth. We’ve therefore known about the relationship between greenhouse gases and Earth’s temperature for at least 150 years.

Four decades later, Swedish scientist Svente Arrhenius did some basic calculations to estimate how much the Earth’s temperature would change if we doubled the amount of CO₂ in the atmosphere. At the time, the CO₂ levels were around 295 parts per million molecules of air. This year, we’ve hit 421 parts per million – more than 50% higher than pre-industrial times.

Arrhenius estimated doubling CO₂ would produce a world 5℃ hotter. This, thankfully, is higher than modern calculations but not too far off, considering he wasn’t using a sophisticated computer model! At the time, the Swede was more worried about moving into a new ice age than global warming, but by the 1900s he was startling his classes with news the world was slowly warming due to the burning of coal.

Read more: Scientists understood physics of climate change in the 1800s – thanks to a woman named Eunice Foote

Climate science began on the fringe

The 1912 New Zealand snippet was likely based on a four-page spread from Popular Mechanics magazine, which drew from the work of Arrhenius and others.

When climate advocates point to articles like this and say we knew about climate change, this overlooks the fact Arrhenius’ ideas were generally considered fringe, meaning not many people took them seriously. In fact, there was backlash about how efficient carbon dioxide actually was as a greenhouse gas.

When the first world war began, the topic lost momentum. Oil began its rise, pushing aside promising technologies such as electric cars – which in 1900 had a third of the fledgling US car market – in favour of fossil-fuel technological developments and military goals. The idea humans could affect the whole planet remained on the fringe.

It wasn’t until the 1930s that human-induced climate change resurfaced. UK engineer Guy Callendar put together weather observations from around the world and found temperatures had already increased.

Not only was Callendar the first to clearly identify a warming trend and connect it to changes in atmospheric carbon dioxide, he also teased apart the importance of CO₂ compared to water vapour, another potent greenhouse gas.

Just like the 1912 article, Callendar also underestimated the rate of warming we would see in the 80 years after his first results. He predicted the world would be only 0.39℃ hotter by the year 2000, rather than the 1℃ we observed. However it did get the attention of researchers, sparking intense scientific debate.

But at the end of the 1930s, the world went to war once more. Callendar’s discoveries swiftly took a backseat to battles, and rebuilding.

In 1957, scientists began the International Geophysical Year – an intense investigation of the Earth and its poles and atmosphere. This saw the creation of the atmospheric monitoring stations tracking our steady increase in human-caused greenhouse gases. At the same time, oil companies were becoming aware of the impact their business was having on the Earth.

Read more: What Big Oil knew about climate change, in its own words

During these post-war decades, there was little political polarisation over climate. Margaret Thatcher – hardly a raging leftie – saw global warming as a clear threat during her time as UK Prime Minister. In 1988, NASA scientist James Hansen gave his now famous address to the US Congress claiming global warming had already arrived.

Momentum was growing. Many conservationists were encouraged by the Montreal Protocol, which more or less haltedthe use of ozone-depleting substances to tackle the growing hole in the ozone layer. Surely we could do the same to stop climate change?

As we now know, we didn’t. Phasing out a class of chemicals was one thing. But to wean ourselves off the fossil fuels on which the modern world was built? Much harder.

Climate change became politicised, with conservative pro-business parties around the world adopting climate scepticism. Global media coverage often included a sceptic in the interests of “balance”. This, in turn, made many people believe the jury was still out – when the science was becoming ever more certain and alarming.

With this scepticism came delays. The 1992 Kyoto Protocol aimed at reducing greenhouse gases took until 2005 to be ratified. Science — and scientists themselves — came under attack. Soon a vicious tussle was underway, with loud voices – often funded by fossil fuel interests – questioning overwhelming scientific evidence.

Sadly for us, these noisy efforts worked to slow action. People refusing to accept the science bought the fossil fuel industry at least another decade , even as climate change continued to increase, with supercharged natural disasters and intensifying heatwaves.

Read more: Communicating climate change has never been so important, and this IPCC report pulls no punches

After decades of setbacks, climate science and social movements are now louder than ever in calling for strong and meaningful action.

The science is beyond doubt. While the first Intergovernmental Panel on Climate Change report in 1990 stated global warming “could be largely due to natural variability”, the latest from 2021states humans have “unequivocally […] warmed the atmosphere, ocean and land”.

We’ve even seen a welcome change in previously sceptical media outlets. And as we saw at May’s federal election, public opinion is on the side of the planet.

National and international climate policies are stronger than ever, and although there is still much more to be done, it finally seems that government, business and public sentiment are moving in the same direction.

Let’s use the 110th anniversary of this short snippet as a reminder to keep speaking up and pushing, finally, for the change we must have.

Read more: The US has finally passed a huge climate bill. Australia needs to keep up