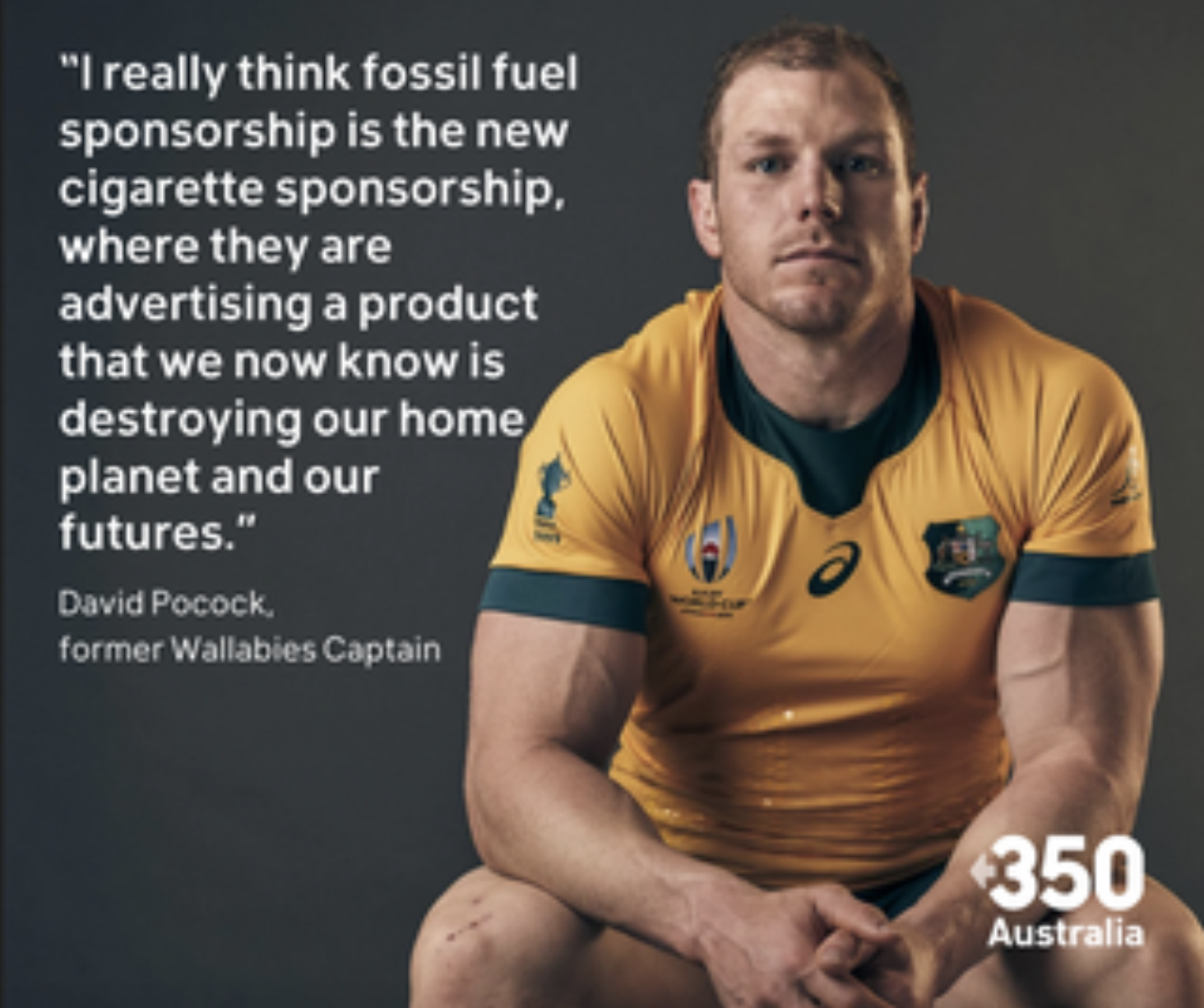 As reported in the Guardian today, this victory comes after our grassroots movement ran a campaign to pressure the Australian Open to drop Santos’ dirty sponsorship.1

When the Australian Open announced a multi-year partnership with Santos last year, 9000 of us made a ‘racquet’ by telling tournament director Craig Tiley that a sporting group promoting fossil fuels today is as irresponsible as a medical group promoting cigarettes in 1930. We ran a social media campaign to raise awareness of Santos’ sponsorship amongst tennis fans.

The Australian Open recently confirmed to 350 Australia that Santos is no longer a partner. This is a huge win that reminds us that when we take action together, we create a safer climate for all.

Now we have an opportunity to build on our people-powered victory. We pressured the Australian Open to ditch Santos, now let’s pressure the ‘Santos Tour Down Under’ to do the same.

The iconic Santos Tour Down Under cycling festival kicked off this week in South Australia. It is outrageous that a major cycling event, held in a state which is a leader in renewable energy, is sponsored by a fossil fuel company.

350 Australia will partner with Fossil Free SA to run a creative advertising campaign to mobilise cyclists to take action, ramp up a petition targeting the Executive Director of Events SA, engage media, and run a series of grassroots actions at the cycling event.

350 Australia hope to pressure the Santos Tour Down Under to change gears and find a new naming rights sponsor beginning in 2023 that has no association with fossil fuel companies.

In the words of David Pocock, 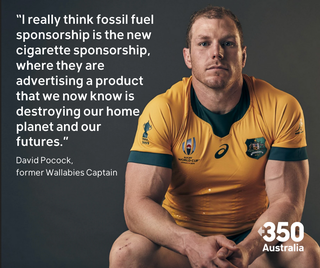 Santos is one of the world’s biggest polluters. Their mission to expand gas production is worsening climate change, threatening farmers, and is opposed by Traditional Owners. 350 Australia aim to continue to undermine their social license to pollute by powering a campaign to pressure Hitaf Rasheed, Executive Director of Events SA, to find a new naming rights sponsor for the Tour Down Under.

[1] “Tennis Australia ends partnership with Santos after one year”, The Guardian, 23 January 2022

Tennis Australia ends partnership with Santos after one year

The multiyear deal with the fossil fuel company had been the target of a campaign against ‘sportswashing’.

Tennis Australia appears to have dumped Santos one year into a “multiyear” partnership deal after a campaign targeting the fossil fuel company for “sportswashing”.

Circumstances surrounding the termination of the agreement are unclear as neither party are commenting but the decision to part ways took place before 5 November 2021.

The deal was announced in February 2021, with Tennis Australia saying at the time that Santos had “joined the Australian Open and ATP Cup family as Official Natural Gas Partner”.

“The Summer of Tennis events will provide a platform for Santos to showcase how natural gas is used in everyday life. Connecting with tennis at a grassroots level is also a priority,” it said.

The company’s branding was widespread during the 2021 Australian Open, with the Santos logo appearing courtside and advertisements promoting the jobs provided by the gas industry playing during broadcasts.

In another instance, a “fuelled by Santos” slogan appeared on the score count during an epic rallies video.

Tennis Australia confirmed to Guardian Australia that Santos had been dropped as a partner.

A spokesperson for Tennis Australia did not respond to detailed questions regarding the circumstances of the decision except to confirm that the partnership agreement had ended.

“Santos was a partner of AO2021, however they are no longer a partner now,” they said.

Tennis Australia is a signatory to the UN Sports For Climate Action framework, which seeks to use the “soft power” of sport to encourage meaningful action on the climate crisis.

Tennis is among those sports considered to be uniquely affected by climate change. The 2014 Australian Open – where play was stopped and 1,000 spectators were treated for heat exhaustion when temperatures rose above 40C – is considered an example of how climate change affects sport.

The 2021 partnership deal faced strong community backlash, with 7,600 people signing a petition addressed to the Australian Open chief executive, Craig Tiley, as part of a campaign on social media.

Sports organisations have also come under internal pressures, with 300 professional athletes signing up to a campaign urging more action on climate change.

The chief executive of 350 Australia, Lucy Manne, whose organisation coordinated the campaign, welcomed the end of the arrangement, saying Tennis Australia “should be congratulated for ending their association with Santos”.

“It’s really important we start to see our biggest, most loved sporting events move away from partnerships like those with Santos,” Manne said.

“Tennis Australia hasn’t told us why this has occurred and they may not, but regardless, this is a huge public benefit in terms of not having a big fossil fuel company’s brand splashed all over a major event.

“There was a big effort to make it unacceptable for cigarette companies to sponsor events … now it’s the time to do the same for fossil fuel companies.”

Santos – which is seeking to develop new gas projects in the Beetaloo Basin, Barossa, and Narrabri – still sponsors several major sporting events, including the Tour Down Under, which begins on Monday.

Last year the International Energy Agency said limiting global heating to 1.5C, a goal set out in the Paris agreement, meant exploration and exploitation of new fossil fuel basins had to stop in 2021.

Manne said it was “perverse” that during the 2020 Tour Down Under sections of the route passed through areas hit by the Black Summer bushfires, while the company was promoting its business through its sponsorship.

“There’s a big opportunity for sports like those overseen by Tennis Australia and the Tour Down Under to educate the public about what the effects of climate change look like,” Manne said.

“And it’s easier to do that without fossil fuel sponsorship.”