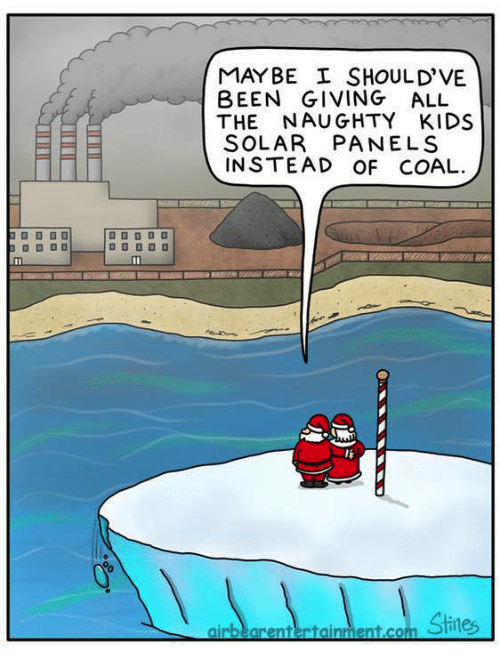 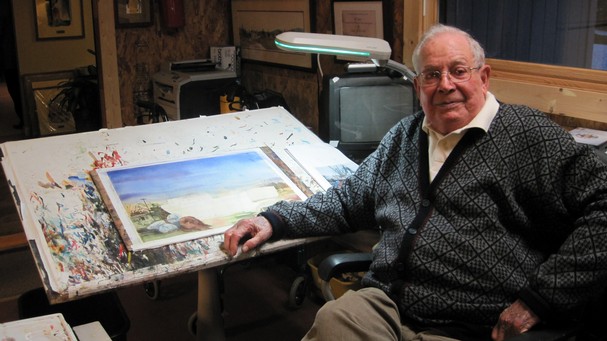 Photo of Al Stine in his studio by Jennifer Crossley Howard.

Painter and Playboy cartoonist Al Stine died on January 25, 2013 at the Hospice House in Anderson, SC. He was 92.  Although no cause of death was given, Mr. Stine had experienced a failing heart condition causing the active painter and illustrator to slow down.

Originally from Charleston, WV, Mr. Stine served in the Air Force in World War Two. Upon his return, he moved to Chicago, where he graduated from the Chicago Academy of Fine Arts and studied at the The Art Institute of Chicago.

While attending the Academy, one of his instructors was Dick Calkins, who drew BUCK ROGERS for eighteen years, from its 1929 inception to 1947. Here’s a quote from an article about an Al Stine 2008 gallery show. It misspelled Calkins’ name, which I have corrected:

“The guy teaching strip cartooning, Dick Calkins, was doing ‘Buck Rogers,’” Stine said. “He worked for Dell Syndicate. But (Calkins) didn’t own ‘Buck Rogers.’ Dell did. He wanted more money and they wouldn’t give it to him. He quit, went out West and became a sheriff. That’s the last I heard of him.”

In the 1950s, Al’s phone rang. The fellow on the other end was “some guy named High Hefner” who was starting a new magazine in Chicago. Hefner had admired Stine’s cartoons that he had seen in Collier’s Magazine. Hefner “surrounded himself with top talent and wouldn’t settle for anything less.”

Stine became part of the magazine, contributing cartoons monthly for Playboy, beginning in its December 1953 debut issue with Marilyn Monroe on the cover.

When asked who his favorite cartoonist was, Stine replied Jack Cole. “Jack’s work was so loose and juicy.”

Stine would produce many cartoons for Playboy, with his striking, painterly cartoons “appearing more times than Pamela Anderson. Granted, his work was meant to elicit a different response,” wrote Upstate Today.

Stine told me about how he met a young, brash publisher who was about to turn magazines and society on its ears. We talked about his time in Chicago, where some of his best ideas came from and how he was only there a couple of years before moving on to new and different things.

But, there he was, on the front lines of the sexual revolution and doing it all in a medium that could document the feelings and emotions of what was going on in the world at that time.

When I talked to him, he said that doing illustrations for Playboy was great, but that teaching art and putting together a piece from scratch were his favorite memories of being an artist. But he also knew how to market the fact that his works appeared in some of the very first issues of Playboy and that he is one of only a handful of people in the world who could say that.

For thirteen years, Al Stine worked for the Feldkamp and Malloy advertising agency. His extensive freelance illustration career covered the commercial and fine arts worlds. He was a president of the Artist Guild of Chicago, as well as a signature member of the Transparent Watercolor Society of America, the American Society of Marine Artists, and the Whiskey Painters of America.

He moved to Anderson, SC with his wife, Liz Stine, who is also an artist, in 1986, opening a studio there. He taught, judged shows and mentored students in the US, Canada, Mexico and Spain. Stine paintings are part of collections of private collectors and corporations.

The Al Stine site has many examples of his fine and cartoon art, as well as his art instruction DVDs and books for sale. 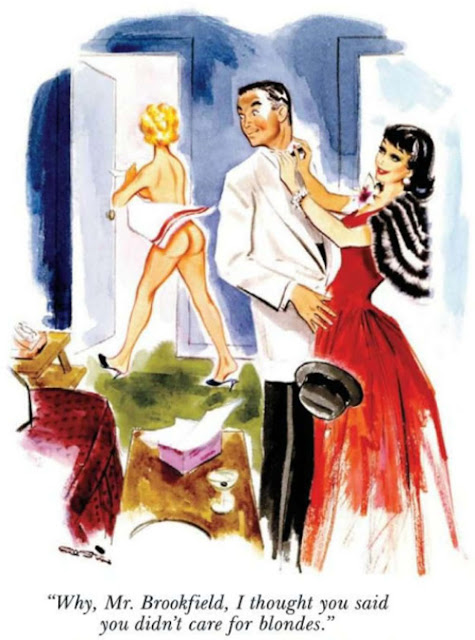 Thanks to D.D. Degg.