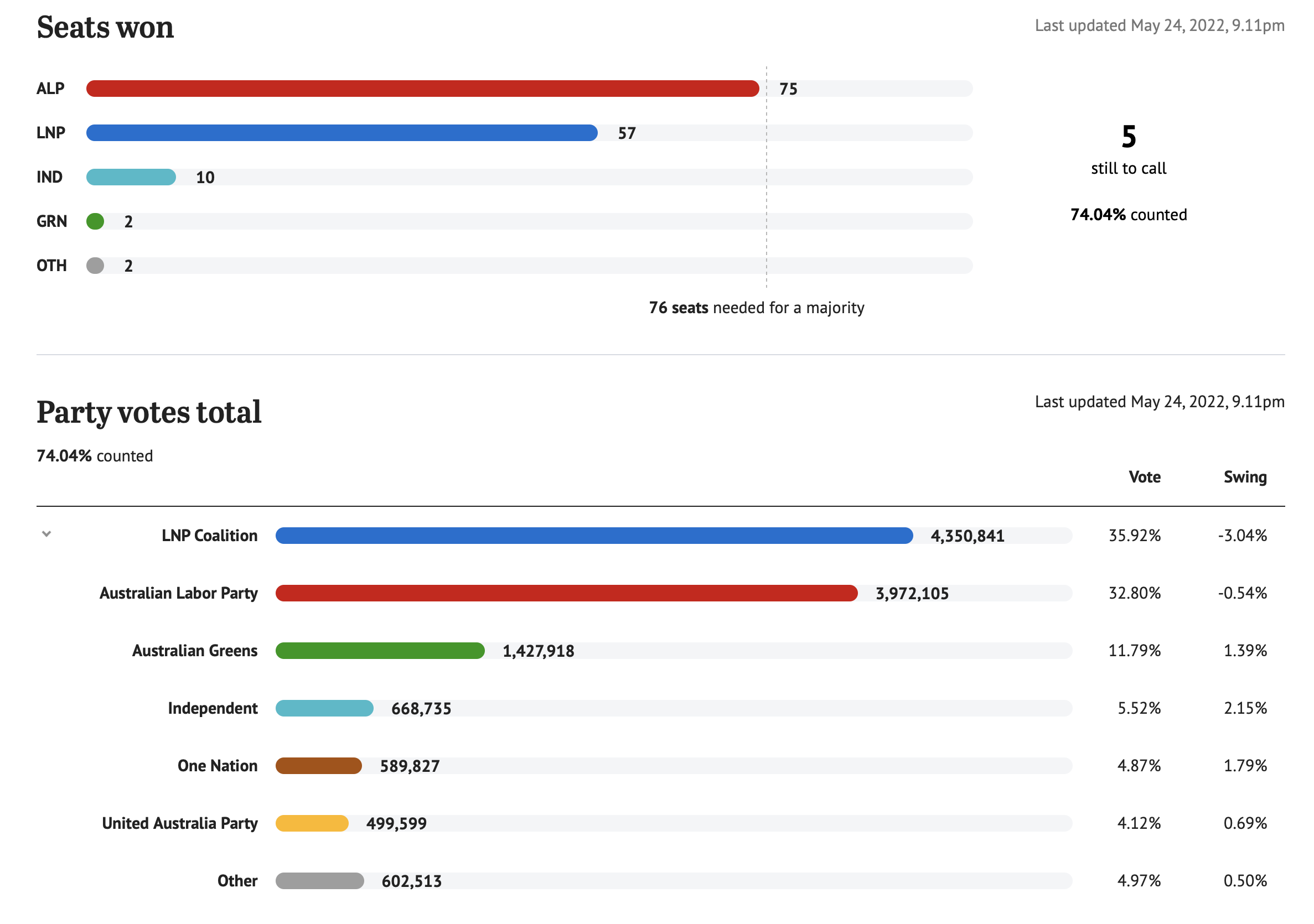 Australia has a new prime minister, but Labor’s path to victory has been unlike any election in history.

With a sea of teal independents winning seats on climate change and anti-corruption platforms and a swing towards the Greens in some capital cities, it seems clear that Australia’s appetite for the two major parties has diminished.

This is reflected in the primary vote count, which will see Labor form government with just around a third of first-preference votes. As of Sunday afternoon, they had  secured at least 71 seats — under the required 76 to form a majority government.

ABC chief election analyst Anthony Green has covered more than 90 elections. Here he takes us through the key takeaways — and some of the still unanswered questions.

We’ve never seen support for the major parties drop so low at a federal level before. The nearest comparison would be One Nation’s breakthrough in Queensland in 1998.

In countries with comparable electoral systems, like Canada, New Zealand and the United Kingdom, we saw the support for the long-dominate parties starting to subside in the 1970s and 1980s. That didn’t happen in Australia — the ’70s saw a polarisation.

I think compulsory voting has added an inertia to the way our political system works and has prevented a decline in the major party vote.

What last night’s result shows is that the two major parties are no longer represented across all parts of the country. There was a time when both major parties would get a substantial majority of the vote in every seat.

People are looking at the national vote level, and missing the fact that the change is occurring at a much lower level; there are parts of cities where Labor’s votes have disappeared, and there are parts of the country where the Liberals and Nationals did very poorly and the independents did well.

Where are the non-major party voters turning?

Realistically, the only third party is the Greens. They received 12 per cent of the vote nationally. One Nation and the United Australia Party got between 4 and 5 per cent each.

At 12 per cent and with concentrated support in particular areas, the Greens are able to win individual electorates and with their level of vote, they’re able to elect senators.

When the Greens’ Adam Bandt won Melbourne in 2010, it was the first time a minor party had won a House of Representatives seat in a general election since before the war. They’ve now won several. But while they’ve got huge success in inner-city seats, they are a negligible force in large parts of Australia.

As for One Nation and Clive Palmer’s United Australia Party, there hasn’t been anything significant. One Nation’s vote rose because it stood three times as many candidates. If you look only at the seats it contested last time, its vote fell.

Clive Palmer’s vote is only slightly higher than last election. One Nation and the United Australia Party’s impact will be with their preferences, and we’re not exactly sure what those are.

The rest of the shift is support for independents, with the highest number of independents ever seen set to enter parliament. Candidates with significant profiles and backing are able to win seats on the right issues. (Independents have so far won 11 seats, with the Greens on track to take four.)

An oddity was, one of the independents that I thought had the best chance of winning, Rob Priestly in the Victorian seat of Nicholls, wasn’t able to take the seat from the Nationals.

People were critical that the teal independents — a group of female candidates running on similar platforms of climate change and a federal anti-corruption body — were getting so much more coverage than other independents but look at, say, Dai Le in Fowler who won over Labor’s Kristina Keneally.

The teal independents are a broader movement and they have had enormous success.

Is this an end to the two-party preferred system?

No. One or other of the traditional parties will continue to form government.

Who is Anthony Albanese?

The son of a single mother, born into a life in public housing, Anthony Albanese has achieved his life-long wish of becoming Prime Minister.

New Zealand moved to proportional representation in the 1990s — a system that gives the public two votes, one for their local member and another for the party they want to see in government — and the two traditional parties are still the only parties that can form government. They can take partners on, but they’re still the only two parties capable of forming government.

The Greens have got significant inroads, but they will still not form government. They will be in the parliament, they may as members have a say on government policies — they’ll say yay or nay — but in the end, they’re not the party of government.

Is a minority government a real possibility? What will that mean?

The two outcomes possible out of this election are a Labor majority or Labor minority government. If the former, it will be a very small majority.

The crossbench will probably demand action on climate change and on an Independent Commission Against Corruption — Labor has a commitment to both. It’s a question of whether it’s a stronger or weaker commitment.

Several well-funded independents ran against established Liberals on a promise of climate action and government integrity. Here’s how the night has turned out for them.

Looking at Australian state parliaments over the past two-and-a-half decades, the Labor Party has consistently shown itself better able to deal with crossbenchers, while the Coalition has struggled when they’ve been put in minority government positions.

You look at the success of the Labor government in South Australia, Victoria’s Steve Bracks coming to government in 1999, the Carr government in NSW at various times, and the Beattie government in Queensland — all had various periods where there were alliances on the crossbench and they all managed to move along.

The federal Gillard minority government had a more mixed problem — and in some senses, their problem wasn’t the crossbench but the perception that they had backflipped on an election policy. That was their undoing.

If all the Greens and independents vote against legislation, the Labor Party could lose things but they’re not going to be brought down. The Coalition is not forming government in that parliament, there’s no opportunity to do so.

What is more likely to happen is that Labor will talk to selected independents if they’re after votes on certain issues. It will be an interesting job for the Leader of the House.

Has a party ever formed government on a primary vote this low?

No, but the total major party vote has never been so low, either.

A parliament is elected, and a government will be formed. People have voted in 151 electorates and have elected 151 members to the parliament, and that parliament will resolve a government.

How Labor won amid the ‘teal wave’

The Australian people have spoken, so how did it all unfold?

The Labor Party had a low vote, but there was a 12 per cent vote for the Greens. There is a significant loss of seats by the Liberal Party to independents with policies the Coalition didn’t support.

People say there hasn’t been a shift from the Coalition to Labor, that the public isn’t wedded to that agenda. Well, no there isn’t.

But the fact is there’s a whole swag of new members of that parliament that want action on climate change and action on corruption commissions, which the Coalition wasn’t offering and Labor is offering a version of it.

The caveat is there’s a vast gulf between the cities and results in the country.

This result has shown the starkest cleavage between city and country that we’ve seen in a long while on very fundamental issues like climate change policy.

And this is not just Greens and independents. In Western Australia, it’s all been for Labor, the Liberals don’t hold a seat in Adelaide, they might hold one in Perth, and they may hold only three in Melbourne.

Apart from Scott Morrison’s seat of Cook, the Liberals hold no seats that border the harbour or the coast between Pittwater and Botany Bay in Sydney — which is just unfathomable given past history of voting patterns in Sydney.

In Brisbane, there are three inner-city seats set to be won by the Greens. You couldn’t have a party more at odds with what people in regional Queensland want. The difference in Queensland is starkest between city and country, but it’s there across the rest of the country as well.

Why was this election so tricky to cover?

Because the major party vote was so low, it was difficult to determine the final two candidates in seats.

Also, where new independents were running, we didn’t have a preference count history for most of those seats, which makes it difficult to use our method of calling seats based on preference counts. We had to call it on first preferences.

Normally, I’ve had to deal with two or three of those situations at an election, not 15.

Will this change the way you cover elections in the future?

Going forward, it may be that this election was a particularly difficult one. If the major party vote continues to decline, then we will continue to see more of these sorts of results.

There are ways we can make our software more sophisticated to deal with these sorts of things. We changed our software back in the 1990s when we started to get more of these contests that weren’t two party.

What was the most interesting thing to come out of Saturday’s results?

The most interesting thing was that we’ve had six weeks of political commentary naming seats as key battlegrounds, and some of them were complete rubbish.

For example, the Labor Party easily held Corangamite and easily held McEwen. And for all the talk of Western Australia, Labor had huge swings. There was talk that Labor might only win two seats, and they’ve won five. It was a wipe-out in Western Australia and it will allow a Labor government to take office.

The main takeaway, however, is that there has been a substantial rejection of the Coalition government that has not necessarily translated to an embrace of the Labor government.

But it has definitely translated into new members elected who want something done about climate change and a corruption commission. So it’s a definite shift in policy from the members elected.

When will we have a final result?

There’ll be some finalisation of the pre-poll voting count today.

On Monday, the Australian Electoral Commission will start to re-throw the seats where they have the wrong preference count.

And probably, by Tuesday or Wednesday, we’ll have a much clearer result.

But some seats will take to the very end, in two weeks’ time.