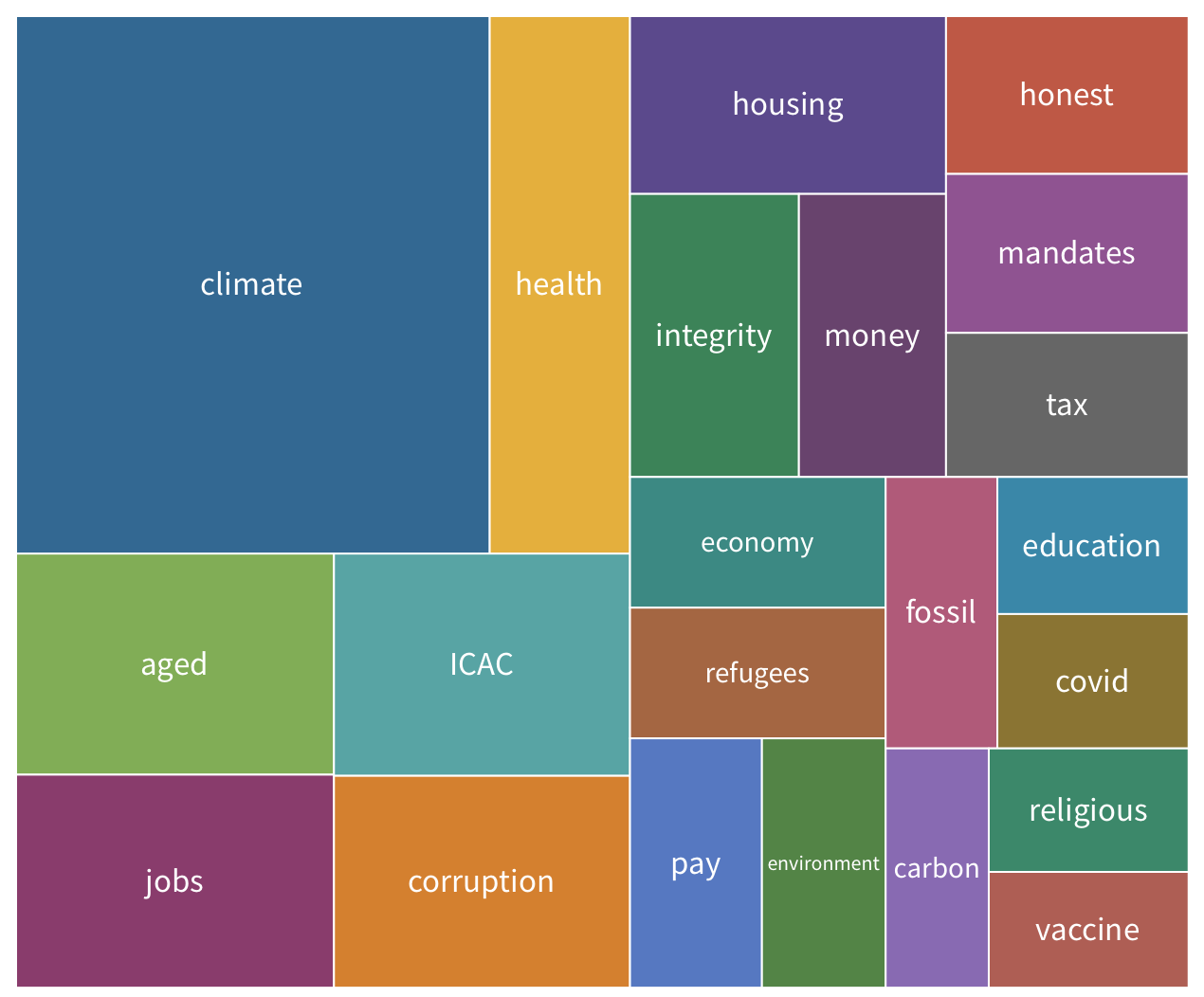 Image: The most used keywords in the 5345 questions for candidates that were submitted by respondents. Source Australian Community Media survey.

The issues Australians want their political leaders to act on and the questions they need answers to before they cast their vote in 2022 have been declared.

In a wake-up call to the major parties, action on climate has been resoundingly returned as the defining issue of this year’s federal election, according to the results of a national reader’s survey conducted by Australian Community Media (ACM), publisher of more than 120 newspaper titles across every state and territory.

Of more than 7,200 ACM readers beyond the major metropolitan cities, 43 per cent returned “environment and climate change” as the most important issue ahead of COVID management, political integrity and leadership and well ahead of bread and butter issues such as “jobs and wages” (9.17 per cent) and “cost of living” (16.69 per cent)

But despite a year long reckoning over the abysmal treatment of women, more than 7 per cent of survey respondents stated “issues affecting women” was a defining issue in guiding their vote. That’s below “national security and defence” (12.6 per cent), though it’s worthy to note ACM’s survey was conducted before Russia’s invasion of Ukraine, and just above “welfare and benefits” (5.6 per cent).

From Bunbury to Bega to Beaudesert, ACM readers across the nation offered pointed, but considered questions for the leaders Prime Minister Scott Morrison and opposition leader Anthony Albanese.

“Will you tell the truth?” one reader asks both men, while another wanted to know, “What are you doing about corruption?”

And another asked, “What are you going to do to ensure that government grants are awarded in an apolitical way and independent of ministerial influence?”

Yet another posed, “How are you going to make Australia a better place for ALL Australians (ie. Indigenous, citizens, permanent residents, LGBTI+, migrants) in a substantial and significant manner?”

Of the 43 per cent of respondents who chose climate as the number one election issue, almost 37 per cent also picked “federal anti-corruption commission” while a quarter (25.11 per cent) selected “health” as an area of concern.

An election showdown is set between the major parties over political integrity after the coalition failed to deliver on an 2019 promise to establish a federal integrity commission. A federal ICAC model proposed by independent MP Helen Haines has widespread support, but it is dead in the water as the Morrison government would not allow debate on it nor would it introduce its own less powerful model for an integrity commission.

“When will the federal anti corruption commission be legislated?” a reader demands to know.

Another wants action on the ground, “What are you going to do to restore an apolitical, frank and fearless public service?”

In seeking votes in 2022 the approach to climate change differs, but not too much as the political battleground in Australia is over whether climate action destroys jobs.

The ALP promises more climate action than the coalition, but not excessively more and not, it says, at the expense of jobs. The Morrison government is tying its climate credentials to emerging, unrealised and unproven technologies such as hydrogen energy and carbon capture and storage. A Coalition scare campaign paints Labor as keen to walk into an alliance with the Greens and attack jobs. Mr Albanese insists he is only running for majority government.

The readers want the leaders to talk directly with them.

One asks, “How are you planning for a sustainable and self-sufficient Australia?”

Another asks, “Will city politicians be willing to build windmills and solar panels on their beaches and knock down their townhouses instead of our prime agricultural land?”

With the COVID-19 pandemic smashing the nation’s health and aged care systems it is no surprise “health” was the second most important issue in the ACM readers survey, with more than 31 per cent of respondents picking it as the greatest area concern when casting votes.

Separately listed but related to the pandemic, more than 21 per cent of respondents listed “handling of the COVID-19 pandemic” and almost 17 per cent picked “aged care.”

“What is their plan for post Omicron and strategies for any future variant outbreaks,” a reader fires at the leaders.

Perhaps most surprising is that “issues affecting women” is quite low down on the list of most important issues.

After the year in which survivors and advocates such as Brittany Higgins and Grace Tame have become household names and the responses by the Prime Minister to some of the most sensitive issues have come into question, just over 7 per cent rated it as an election issue. However, it can be seen that this issue relates to “leadership” which came in at almost 27 per cent on the list of important issues.

Indeed, with little policy to debate early on, the election is focusing on character, trust, integrity and perhaps taking a punt on someone new.

“What will you do to repair the cultural rifts in Australian society,” one reader sought from Mr Morrison and Mr Albanese.

Another asked, “Do you think politicians should be qualified for the portfolios and positions that they represent?”

And, “What is your plan to address the 1.2 trillion dollar debt?”

The ACM readers survey shows childcare has been diffused as an election issue. The major parties released their main childcare policies last year and the heavy cost and workforce issues of this vital productivity measure has not been widely debated for some time. Less than one per cent rated it as an election issue.

Only five per cent of the 7285 respondents listed their own election issue of concern. Vaccine mandates came in at just 0.4 per cent of those surveyed.

Karen Barlow is ACM’s Chief Political Correspondent. Working in the federal press gallery, she investigates and writes about federal politics and government. She has an interest in integrity, leadership and social equity. She has covered two Olympics and been to Antarctica twice. Contact her on karen.barlow@canberratimes.com.au