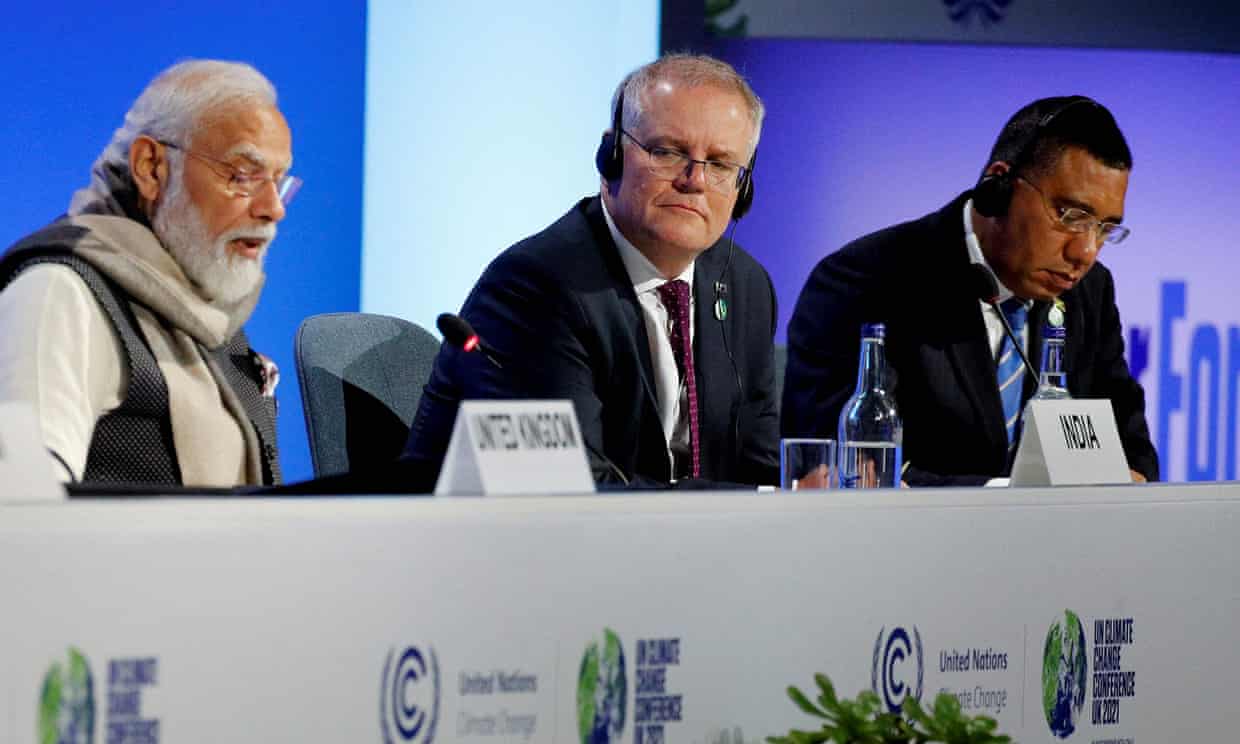 Morrison government rejects direct calls for action from Britain, the US, Europe and Pacific nations at Cop26

Pressure on the Australian government to lift its 2030 emissions target is expected to escalate and continue into next year, based on a document released by the British hosts at the Glasgow climate summit.

A summary of issues to be negotiated in the second week of the Cop26 talks includes a push for countries that have not improved their short-term targets to be told they are expected to do so in 2022.

Australia was one of the few countries to not increase its short-term pledge – formally known as a nationally determined contribution (NDC) – before or at the summit, rejecting direct calls from allies in Britain, the US, Europe and the Pacific.

The Morrison government instead re-submitted the 2030 target set under Tony Abbott before the landmark Paris agreement was signed in 2015 – a 26-28% cut compared to 2005 levels. Others to not update include were Russia and Brazil.

Countries are expected to “ratchet up” their commitments every five years to build action and momentum towards global carbon neutrality. This year the US doubled its 2030 target, other G7 members all set goals of at least a 40% cut and India said it would have 50% renewable energy. China offered a more modest increase.

On Sunday, the British environment secretary, George Eustice, said the UK may eventually need to introduce a carbon border tax, placing a levy on imported goods from countries without a carbon price. He said this could particularly apply to meat imports. The European Union is proposing a similar carbon border tariff and US Democrats have raised a similar idea.

A former Australian climate diplomat now with the Australia Institute, Richie Merzian, said Australia was “under increasing pressure along with some other laggards”.

“It’s clear that its attempts to get away with a weak net zero plan have failed and the international community is asking for an immediate increase in effort and target in the short-term,” he said.

There have been varying estimates of how substantial the new commitments could be in limiting emissions. Some studies have found that, if delivered, they could keep heating to below 2C above pre-industrial levels. But a United Nations assessment found they would still lead to global emissions rising 13.7% by 2030.

Scientists have called for emissions to be cut roughly in half by the end of the decade to keep alive the chance of limiting global heating to 1.5C, which the scientific consensus has marked as a threshold to limit the impact of worsening heatwaves and extreme events and give coral reefs and at-risk species a chance of survival.

The British government’s summary document of issues to be debated this week emphasises the “importance of keeping 1.5 degrees in reach” – a potential strengthening of the language of the Paris agreement, which said that countries would “pursue efforts” to stay at that level.

Some countries are arguing the agreement should be accelerated so that NDCs are updated every year. The summary document also shows the disquiet over the delay in reaching a commitment of US$100bn funding for climate finance for the developing and worst affected nations, which was meant to be met last year.

It says countries have expressed “deep concern” that the goal has not yet been met. A recent UN report suggested it should be reached by 2023. The US special climate envoy, John Kerry, said in Glasgow it could be delivered in 2022.

Scott Morrison has announced an additional $500m climate financecommitment over five years, less than many comparable countries. A Greenpeace investigation last week found fewer than a quarter of designated Australian climate aid projects actually made any mention of climate change or environmental concerns.