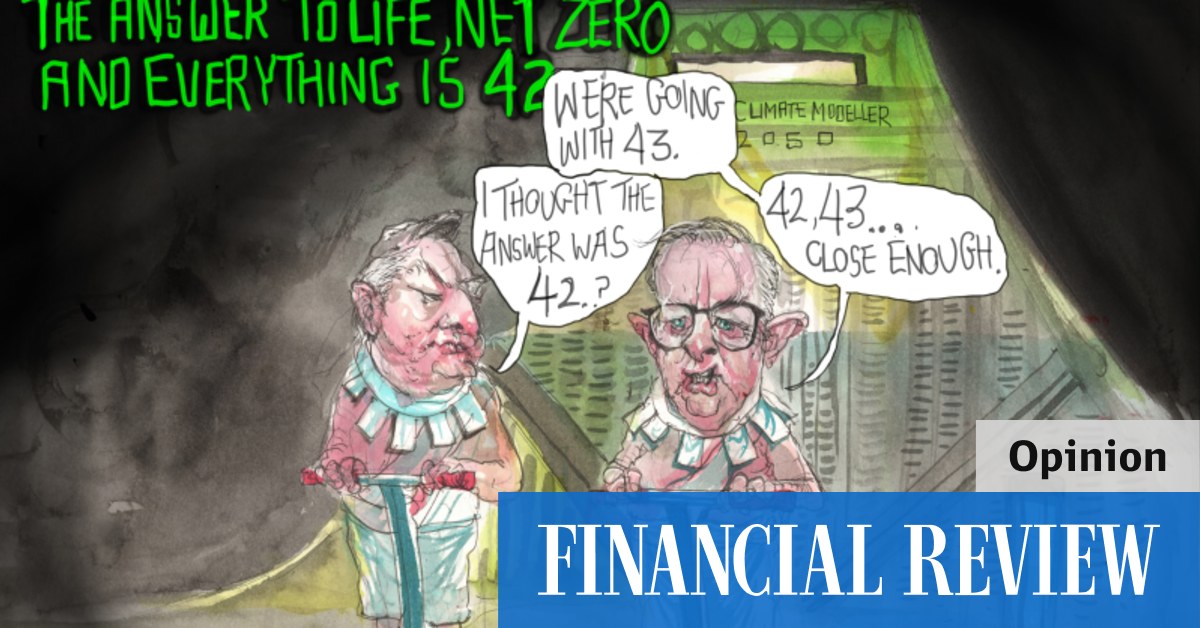 “There’s only one party taking a credible liberal emissions reduction mechanism to the election, and it isn’t the Liberal party.”

Labor’s climate policy slakes the thirst of economic rationalists hanging out for someone – anyone – to deliver a rational response to the climate challenge.

When you’re provoking outrage by both the left and right, it’s a good sign you’re doing something right. And so it is with Labor’s climate policy finally announced on Friday, which happens to slake the thirst of we economic rationalists hanging out for someone – anyone – to deliver a rational response to the climate challenge.

Given Labor’s bruised history on climate policy, and the government’s clear signalling it’s ready to unleash a “sneaky carbon tax” scare campaign, it ought to be received by readers of The Australian Financial Review as a kind of Christmas miracle. Like Atlas, condemned by Zeus to holding up half the sky on his shoulders, Labor is the one major party willing to take up the mantle of sensible, rational, market-based climate policy.

Exactly eight weeks ago on these pages, I pointed to the Safeguard Mechanism as the right approach for the party of free markets. No sooner had I done so than Angus Taylor had branded such an approach a “sneaky carbon tax”. One shudders to think of what John Howard – and the architect of his own sneaky carbon tax, Peter Shergold – thinks of what has become of his once-great party of private enterprise.

Against all odds, Labor went ahead and did what the Liberals refused to. They plan to rely on the Safeguard Mechanism to drive down net emissions in industry, making up around half of their additional reductions to 2030. The Business Council of Australia and Ai Group have endorsed the move, recognising what business has been saying for a while: climate action is a co-ordination problem, and all businesses really want is certainty.

What’s most striking about the government’s continued claims the climate problem will solve itself is that by contrast it’s been met with a deafening silence among experts and business leaders. Is there a single credible, independent expert or major business figure who has endorsed the government’s policy vacuum? It remains to be seen if simply saying the words “net zero by 2050″ will be enough for inner-city voters.

The Safeguard Mechanism achieves a similar outcome to a carbon tax, but with one big difference, meaning it’s not a tax at all. Rather than charging businesses for all their emissions via a fixed price or auction, the Safeguard Mechanism grants businesses their emissions entitlement for free. They then only incur an additional cost in reaching their entitlement either directly or by buying permits.

On one hand, this significantly reduces the financial impost on businesses; on the other, no net revenue is generated to compensate consumers. It’s important to note, however, that when Tony Abbott “axed the tax”, he kept in place the household compensation that came with it. So households are now way ahead on net, and will continue to be so regardless of what happens with the Safeguard Mechanism.

The big unknown is how Labor deals with emissions-intensive, trade-exposed industries. Labor says they won’t face a higher burden than their competitors, but hasn’t provided details on how. This generates the potential for rent seeking by businesses wanting to avoid action, which must be strenuously avoided. Labor must not forget that the more businesses that are shielded, the greater the impost on the others.

Climate fanatics have predictably derided Labor’s target as weak. It’s true that 43 per cent is too low, with a higher target of 50 per cent closer to what’s needed. But these medium-term targets are intended to be ratcheted up over time, and 43 per cent is a significant step up from our existing 26-28 per cent international commitment and the government’s current projection of 30 per cent.

Moreover, Labor isn’t banking on the government’s more optimistic “high technology sensitivity” projection of a 35 per cent emissions reduction to hit its target. Rather, its policies add 13 percentage points to the central 30 per cent target. So if technology develops faster than expected, Labor’s plan would achieve a higher reduction of more like 48 per cent.

We have for decades recognised that electricity infrastructure can be most efficiently built and run by the private sector – provided the regulatory settings are well-designed. It is this regulation – and not a lack of financing that is holding back the transition. Fixing it would address the problem without putting $20 billion in public funds at risk.

But the biggest gap is in transport – something the government has also squibbed. Just one of Labor’s 13 additional percentage points come from transport. While the policy purist in me is relieved they didn’t commit billions to EV subsidies, a future government – Labor or Coalition – will have no choice but to ratchet up vehicle emissions standards. For now, that can gets kicked down the road.

But this is all a sideshow to the main event. The bottom line is clear: there’s only one party taking a credible liberal emissions reduction mechanism to the election, and it isn’t the Liberal party. If the voters aren’t fooled by all their spin and subterfuge, let’s hope the Liberals spend their time in the wilderness rediscovering what it means to be truly liberal.

Steven Hamilton is assistant professor of economics at George Washington University in Washington DC and visiting fellow at the Tax and Transfer Policy Institute at the ANU.

More than 200 of the nation’s heaviest polluters will be required to collectively lower their emissions over the next three decades under Labor’s climate policy to help achieve an economy-wide cut of 43 per cent by 2030, and net zero emissions by 2050.

The policy was in line with demands by peak employer and business groups, but nonetheless is set to become an election battleground after the government labelled it a carbon tax before it had even seen it.

The policy, according to the associated modelling by Reputex, will lower power prices, increase jobs and drive the uptake of renewable energy.

A centrepiece of the policy is a revamped safeguards mechanism that will apply to the 215 entities that currently emit more than 100,000 tonnes of CO2 a year.

These entities, which include power stations, large foundries and mines, will be required to reduce aggregate emissions by 5 million tonnes a year to collectively achieve net zero emissions by 2050.

Labor and groups such as the Business Council of Australia have arguedsuch a mechanism is needed to provide the commercial impetus to achieve net zero by 2050.

The government, which set up the safeguards mechanism in 2016, has never really enforced it and these same entities have increased their emissions by 7 per cent since the scheme’s commencement.

Under the plan unveiled by Labor leader Anthony Albanese and shadow climate change minister Chris Bowen, the revamped mechanism will begin in 2023-24 and require the aggregate emissions by all eligible entities to reach net zero by 2050.

The rate of emissions reduction will be different for each entity and will be dictated by the Clean Energy Regulator. To ensure they meet their required reductions they can either cut their emissions or, if unable to do so, offset them by buying carbon credits. Mr Bowen said two thirds of the 215 companies already have policies to get them to net-zero by 2050.

Emissions Intensive Trade Exposed industries will be given tailored treatment to ensure they are not put at a competitive disadvantage.

“No EITE will face a carbon cost higher than their competitor,” Mr Bowen said.

The BCA has led calls for such a mechanism and applauded Labor’s plan as “sensible and workable”.

“It will be important for Labor to work closely with business on the detail, including measures to ensure export exposed jobs aren’t unfairly put at risk by a tightening of the emissions baseline.

Australian Chamber of Commerce and Industry chief executive Andrew McKellar was supportive but wanted assurance that the safeguards mechanism would not drive up power prices.

“The critical test as to whether this policy will sink or swim will be its impact on power prices,” Mr McKellar said.

“It’s whether or not there will be costs and whether that is passed on to the supply chain.”

Industry and Energy Minster Angus Taylor said Mr Albanese had caved in to the Left and introduced a “sneaky new carbon tax” on agriculture, manufacturing, mining and transport.

He said Labor modelling showed the 215 emitters would have to purchase $1.66 billion in offsets by 2050 based on current Australian Carbon Credit Unit prices.

“That’s $1.66 billion in costs that will make these businesses less competitive, forcing jobs and industries offshore,” he said.

Mr Bowen said the Coalition was completely out of step with business, its supposed core constituency.

“Why does the Liberal National Party government think they know more about business than business,” he said?

There was some nervousness inside Labor when the policy was presented to caucus on Friday morning.

Meryl Swanson, who holds the coal-rich Hunter Valley seat of Paterson in NSW, told the meeting the 43 per cent target would be hard enough to sell to the regions, let alone the safeguard mechanism.

Last election, Labor set a 45 per cent target for 2030 and came up with policies to get there. This time, it has adopted the government’s 35 per cent projection by 2030 as a target and added on the carbon reductions that Reputex says Labor’s already-announced polices will deliver.

These include its community battery fund, its electric vehicles policy and an off-budget, $20 billion loans and equity plan to rebuild the electricity transmission network using local workers and materials, so it can better cope with the influx of renewable energy.

“We did not pick a figure and then not be able to explain how we can get there,” Mr Albanese said.

“What we have done is outline a series of policies. And you can see how much they contribute to the reduction in emissions going forward.”

Despite the change in mechanism requiring no new policies or sacrifices, Mr Morrison sledged the 43 per cent target. He said Labor had learned nothing from the last election.

“You invest in the technologies that get you there by 2050, you don’t do it by forcing people’s electricity prices up, forcing people out of jobs,” he said.

Mr Albanese said if he won the election next year, he would be able to go to the COP27 summit in Egypt and join other developed countries in promising an increased 2030 target, which Mr Morrison refused to do last month a Glasgow.

“Less than a month after the biggest climate conference in world history Australia has been asked to try again when it comes to climate policy,” he said.

“We will be able to go to an international climate change conference and not be in the naughty corner.”

As a statement of intent, he said Australia would apply to host the next major COP meeting in three years’ time.

“Under Labor, Australia will respond to the changes that are coming and shape our future to benefit all of us. A fourth term for the Morrison government will see them frozen in time as the world warms around them.”

Phillip Coorey is the political editor based in Canberra. He is a two-time winner of the Paul Lyneham award for press gallery excellence. Connect with Phillip on Facebook and Twitter. Email Phillip at pcoorey@afr.com
Pledge Your Vote Now
Change language