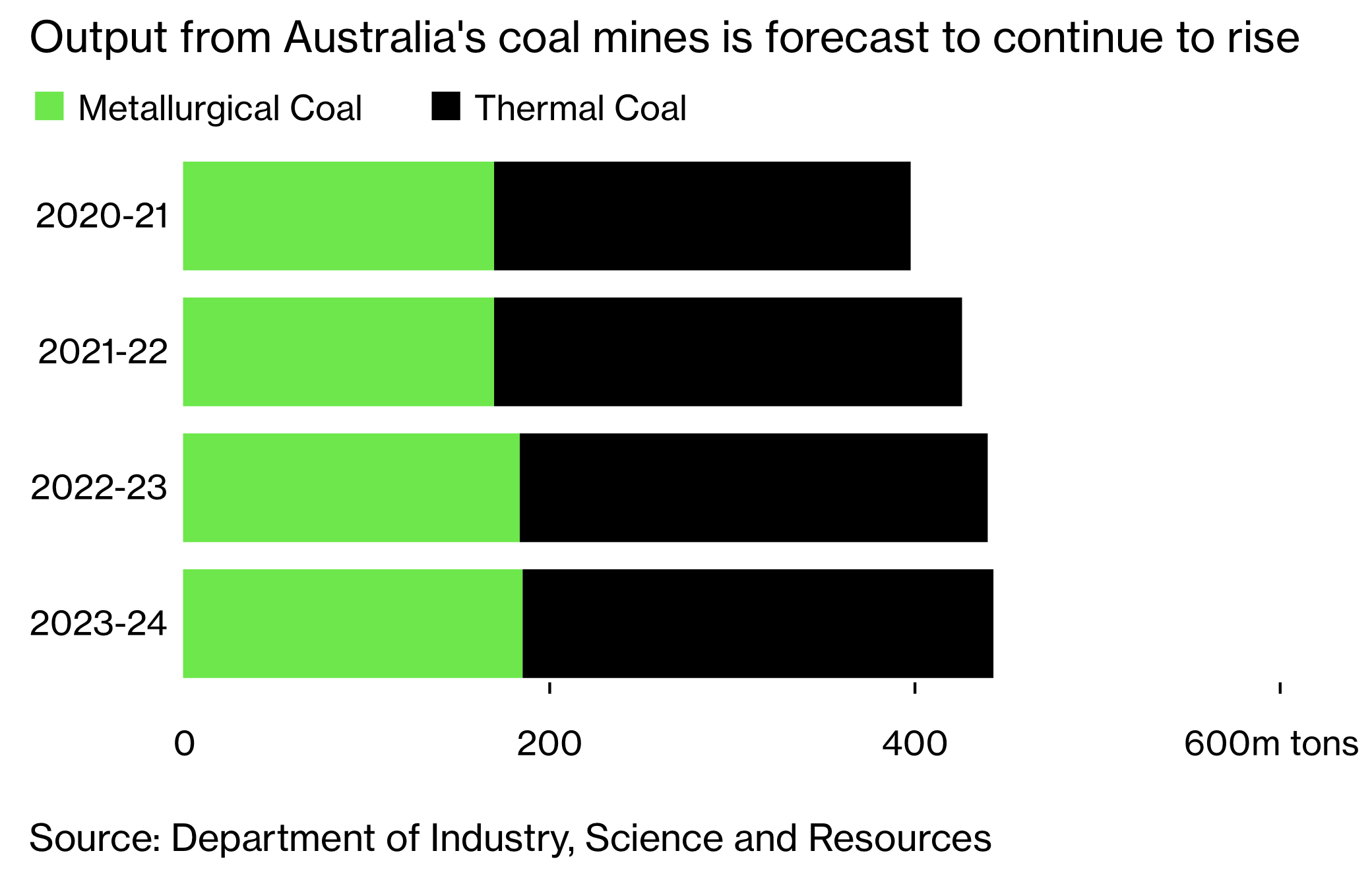 Coalwire (Bob Fulton): Australian Government faces decisions on a dozen new coal projects: Move Beyond Coal, a climate NGO, has revealed the recently elected Australian Government faces decisions on 29 coal mines, of which 13 are new projects and 16 are expansions of existing mines. The new Minister for Environment, Tanya Plibersek, also faces decisions on applications to protect Aboriginal Cultural Heritage sites from coal mining and, in Adani’s proposed North Galilee Water Scheme, to pipe 12.5 billion litres of water a year for the company’s Carmichael coal mine. The Labor Government was elected in May 2022. On election night, Prime Minister-elect Anthony Albanese declared, “together, we can end the climate wars.” Move Beyond Coal estimates that the total emissions from burning the coal in the 29 proposed coal projects could amount to 17 billion tons of carbon dioxide, about 35 times Australia’s annual emissions. (Bloomberg, Move Beyond Coal)

A proposed pipeline of coal mine projects in Australia, the world’s second-biggest exporter of the fuel, are threatening to lock in decades of new carbon emissions and challenge the country’s promises of bolder climate action.

The federal government is considering 29 applications for new mines and expansions which, if developed to their full capacity, would produce more than 250 million tons a year and contribute as much as 17 billion tons of carbon dioxide emissions, according to a study by Move Beyond Coal, a Sydney-based climate advocacy group. That total is equivalent to more than half of global emissions in 2021.

The future of the country’s $63 billion coal export industry is a dilemma for Prime Minister Anthony Albanese, who took office in May with a promise to improve a weak record on climate action. Though his government has tightened emissions reduction targets, Albanese has also signaled support for new gas and coal developments amid a global energy crisis that’s seen buyers scramble for the country’s exports and swelled profits for fossil-fuel producers.

Global electricity generation from coal jumped about 8.5% last year to more than 9,600 terawatt-hours, the first increase since 2018, according to data compiled by BloombergNEF. Climate groups have raised concerns over the potential impact on efforts to curb emissions as nations revert to using the dirtiest fossil fuel.

Albanese’s government “is talking the talk that Australia is back on climate, but it’s got all these coal mines that are under review,” said Fahimah Badrulhisham, a spokesperson for Move Beyond Coal, the campaign group that produced the data. “We cannot allow new mines to be dug in 2022.”

Ministers currently have no legal obligation to consider climate impacts when authorizing development of new mines, and campaigners in March lost an attempt to block a Whitehaven Coal Ltd. proposal over its projected emissions. Members of Australia’s Green Party and pro-climate independent lawmakers have called for existing environmental laws to be tightened.

Environment Minister Tanya Plibersek is reviewing current laws, her office said. Coal mine applications are being assessed on a “case-by-case” basis, she said in July. Mining tycoon Clive Palmer was refused approvals in August for a the Central Queensland Coal project over the potential impact on the Great Barrier Reef.

Mining giants including BHP Group, Glencore Plc, and Peabody Energy Corp. are among producers with projects in Australia being considered by the government. BHP and Mitsubishi Corp.’s proposed Blackwater South metallurgical coal mine in Queensland is seeking approvals to cover a 90 year lifespan. That would equate to 1.98 billion tons of emissions, according to Move Beyond Coal’s estimates.

BHP declined to comment on the emissions forecast. Chief Executive Officer Mike Henry previously suggested the mine would be unlikely to operate for the duration set out in approval documents.

Glencore’s Valeria thermal and metallurgical coal mine in central Queensland has a proposed lifetime of 35 years and would emit 1.39 billion tons of carbon dioxide, Move Beyond Coal said.

The release of 17 billion tons of carbon dioxide from all the proposed mines would account for 4% of the world’s remaining “carbon budget” of 420 million tons — the point at which planetary warming of 1.5 degree Celsius (2.7 degrees Fahrenheit) becomes the most likely scenario, according to the Global Carbon Project.

A total of 31 coal mine projects were at the committed stage, where a final investment decision has been taken, or undergoing feasibility studies, Australia’s resources ministry said in a report in December.

— With assistance by Andrew Janes