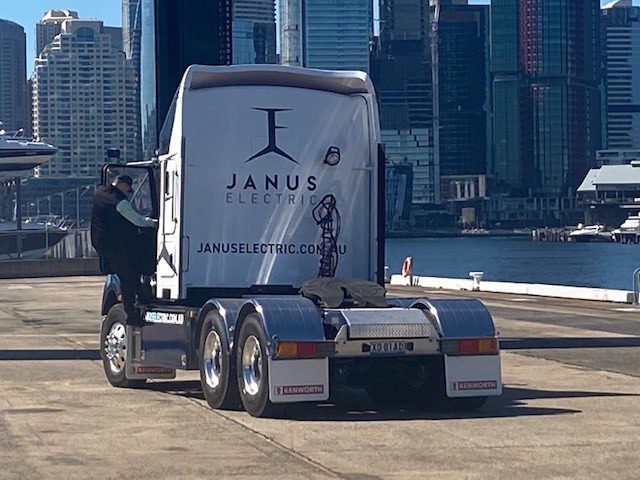 The conversion technologies of Janus is focused on what it says is a sweet spot in the industry – the need for all heavy vehicles to have a major engine rebuild after one million kilometres.

“This provides an ideal opportunity to convert to electric,” CEO Lex Forsyth says. “Electrifying our road network is no longer a pipedream for future Australia, but a real tangible solution for today that we can act on now.”

Janus is using 630kWh batteries that – depending on the size of the load – can deliver around 400kms of range for a B-double. It will feature a 540kW motor. The batteries are located within easy reach below the cabin (see picture below) and can be swapped within four minutes.

Janus will be building a series of major recharging and battery swap stations around the trucking network, but says these can also be operated by private networks or existing petrol providers.

These stations will have a capacity of around 38MW, with a 20MW feed to and from the grid. “We’ll have the largest virtual power stations in the grid,” he says.

Forsyth says the charging and swap stations will feature grid to battery, battery to grid (to provide services such as FCAS), and battery to battery technologies, which will be used when the truck tracking system decides the resources of multiple batteries be focuses on one or two if they are needed urgently.

“There’s a constant evolution, and that’s why it makes sense to have exchangeable batteries,” he said.

Forsyth says the economics of the electric battery technology are already compelling. On a kilometer to kilometer basis, they are around one third of the price – around 33c per kilometers compared to 96c per km for diesel. Even with the cost of batteries, the technology delivers savings of around one third over diesel.

And once the batteries are depleted – say to around 70 per cent – they can be re-purposed as stationary storage.

Dusty, a mechanic and truck driver (above), took The Driven for a short trip around the tarmac at the White Bay Cruise Terminal in Sydney. “It’s so smooth to drive,” he says. “The noisiest part is the air conditioning. And with the (regeneration) you have one pedal driving, you only need to brake if you want to come to a complete stop.”

Forsyth is also dismissive of hydrogen alternatives, noting that there are a “rainbow” of colors for hydrogen, ranging from black, brown, gray and blue, and even green hydrogen is not necessarily zero emissions if the source of power (wind and solar farms) have already sold green certificates for other companies to claim offsets.

“If the LGCs are sold to another company to offset emissions, it should not be used as green energy. That would mean they are still being used to greenwash carbon emissions,” he says.

He says batteries provide 85 per cent efficiency, compared to around 30 per cent for diesel and 28 per cent for hydrogen.

Forsyth says the conversion process is relatively simple and costs around $150,000.

Janus takes out the diesel engines, the radiators, the collars and the fuel tanks and exhaust pipes and air intakes, and gives them back to the fleet. And then they install their JCM conversion system. The trucks use between 1.2kWh and 1.8kWh per kilometer, depending on their size.

Janus has already struck deals with Oz Minerals and Qube, and it says there is strong interest from mining companies, trucking companies, and petrol station operators keen to latch on to the new technology.

The company is raising $10 million ahead of an expected IPO and stock exchange listing later this year.

Giles Parkinson is founder and editor of The Driven, and also edits and founded the Renew Economy and One Step Off The Grid web sites. He has been a journalist for nearly 40 years, is a former business and deputy editor of the Australian Financial Review, and owns a Tesla Model 3.