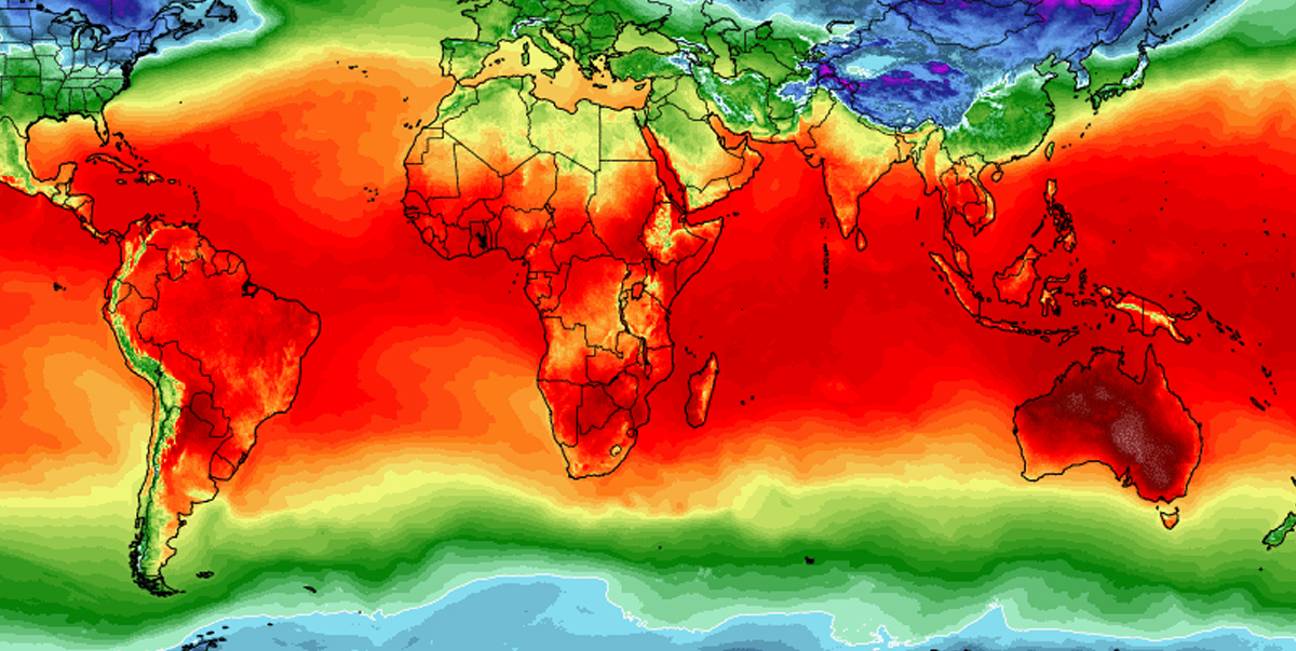 Global heating has substantially transformed global wildfire, increasing fire seasons across 25% of the Earth’s vegetated surface and doubling the global burnable area affected by long fire weather seasons [paper]. Global heating increases fire risk in several ways; most directly through an increase in the number of extremely hot days, but also through a decrease in the number of cool days and nights. The best predictor for the five-fold increase in bushfires in California between 1972 and 2018 is the number of hot dry days (as measured by the “vapor pressure deficit”, a combination of high temp and low humidity). Increased number of high VPD days increases the dry fuel load which increases with the area burned [paper],

The Australian Bureau of Meteorology concludes that, “Climate change is influencing the frequency and severity of dangerous bushfire conditions in Australia and other regions of the world, including through influencing temperature, environmental moisture, weather patterns and fuel conditions. There have been significant changes observed in recent decades towards more dangerous bushfire weather conditions for various regions of Australia….” [report]. Similarly, the CSIRO concludes, “There has been an associated increase in the length of the fire weather season. Climate change, including increasing temperatures, is contributing to these changes” [report].

Historical data conform with this position. For example, a comprehensive database in the United States shows that large wildfire activity increased markedly in the mid-1980s, with higher frequency of large-wildfires, longer wildfire durations, and longer wildfire seasons [paper]. Similarly, anthropogenic climate change added an estimated 4.2 million hectares of forest fire in the USA between 1984–2015, nearly doubling the area that would have otherwise burned [paper]. In 2017 a record fire season occurred in British Columbia, Canada, burning over 1.2 million hectares. Over 95% of the observed maximum temperature anomalies across that season could be attributed to global heating, more than doubling the event’s high fire weather metrics and increasing the area burned by a factor of 7–11 [paper].

Fire models driven by global climate models (GCMs) consistently predict a long-term increase in fire probabilities, with an increased risk of greater than 60% at mid‐ to high‐latitudes, slightly offset by a decreased risk in tropical areas [papers]. Recent modelling has been particularly prescient given Australia’s current fires: “Pyrocumulonimbus” fires are extreme wildfires which involve a coupling between the fire and the atmosphere, driving dangerous fire conditions – even fire thunderstorms – that result in fatalities and considerable damage. Two papers appearing in July this year predicted increases in extreme weather and pyroconvection risk factors for Australian wildfires [paper, paper]. Pyrocumulonimbus wildfires have since occurred repeatedly in Australia’s current fire season, at times associated with internally generated thunder and lightning, in addition to fatal, catastrophic fire conditions at ground level (Fig. 9).

Pyrocumulonimbus wildfires magnify the impact of global heating on extinction events. Fires play an important role in ecological systems and as such, flora and fauna have not only adapted to survive fire, but many components of biodiversity depend on recurrent burning. Unfortunately, intense wildfires under the influence of global heating can impact negatively on remnant species populations in fragmented bushland. In particular, a sudden loss of numbers can decrease genetic diversity in small remnant populations leading to a “near‐extinction bottleneck” [paper]. That is, even if numbers recover, there remains increasing inbreeding and less fitness in the population. Recurrent events can lead to a species becoming “functionally extinct”; a population does not encompass sufficient numbers and genetic diversity for recovery and future viability. The 2019-2020 bushfires of Australia have killed substantial numbers (possibly hundreds of millions) of animals and will have substantially increased extinction pressures on a number of native species [paper].

Recent bushfires in south east Australia have caused sudden deaths of up to 35% of local, biodiverse koala populations [media]. While koala numbers have declined by approximately 99.5% in the last 200 years, as a whole they are not considered functionally extinct, but vulnerable or critically endangered (although some of the 20 different species are likely functionally extinct) [report]. Future projections predict further declines in this iconic marsupial species [paper] so that widespread regional extinction seems likely.

The decrease in global burned area has been used to argue that wildfire risk is not increasing, but this is clearly not true: Research in this area has conclusively found that the primary drivers of declining fire activity have been “agricultural expansion and intensification” [paper] despite the fact that “rising temperature and frequent droughts are becoming increasingly important and expected to increase wildfire activity in many regions of the world.”[paper].

It is generally accepted that fire load (the density of flammable material) plays an important role in bushfire intensity, size and damage. Prescribed, off-season burning is the accepted way reducing fire load (particularly smaller forest litter) and legislated at a state level [report]. For this reason, Australian states legislate an annual quote of prescribed burning that is coordinated across state forests, National Parks, rural fire services and private land-owners. However, the impact of prescribed burning on fire load and biodiversity are complex [paper]. One reason for this is that fires can “cure” (dry-out) forest material, increasing rather than decreasing fuel. For example, post-burn assessments of prescribed burns in the Blue Mountains (from 1990-97) found that 30 per cent of the burns had a negative result, 40 per cent were sub-optimal, and 30 per cent could be rated as effective burns. When they are effective, fuel re-accumulation may limit their effectiveness to a short post-treatment period (2–4 years) [paper], meaning that burning would be required every 5 years. Given the enormous expanse of Australia, this limits the effectiveness of prescribed burning as a large-scale fire mitigation strategy. It is therefore targeted to decrease fire intensity near populated areas, improving subsequent fire suppression efforts at the time of fire.

While fire plays an important role in ecosystem life cycles, repeated prescribed burning in a limited area can actually decrease local biodiversity. Moreover, quantitative analysis of previous fires across SE Australia suggest that the influence of extreme weather events are up to 50 times more important than the influence of the time since the last fire. For this reason, the best results of prescribed fire are thought to be in climates where the likelihood of extreme weather conditions is low [paper]. Expert opinion suggests that controlled burning modifies bushfire behaviour, making them easier to control [media].

Naturally occurring wildfires increase carbon cycling but are thought to be close to carbon neutral when factoring in regrowth: However, extreme fire under the influence of global heating may liberate carbon from soil and turn forests into carbon emitters [paper].

Next section: Impact of climate change on economic activity and human mortality

Climate-induced variations in global wildfire danger from 1979 to 2013

Observed Impacts of Anthropogenic Climate Change on Wildfire in California

Impact of anthropogenic climate change on wildfire across western US forests

As fires rage across Australia, fears grow for rare species

Spatial and temporal patterns of global burned area in response to anthropogenic and environmental factors: Reconstructing global fire history for the 20th and early 21st centuries

The Interaction of Fire, Fuels, and Climate across Rocky Mountain Forests

A review of prescribed burning effectiveness in fire hazard reduction

Fire, Global Warming, and the Carbon Balance of Boreal Forests

State of the Climate (Bureau of Meteorology and CSIRO)

The Koala – Endangered or Not?

Is Fuel Reduction Burning the Answer? (Brief to the Australian Parliament, Dec. 10, 2002.

To save koalas from fire, we need to start putting their genetic material on ice

How effective is bushfire hazard reduction on Australia’s fires?