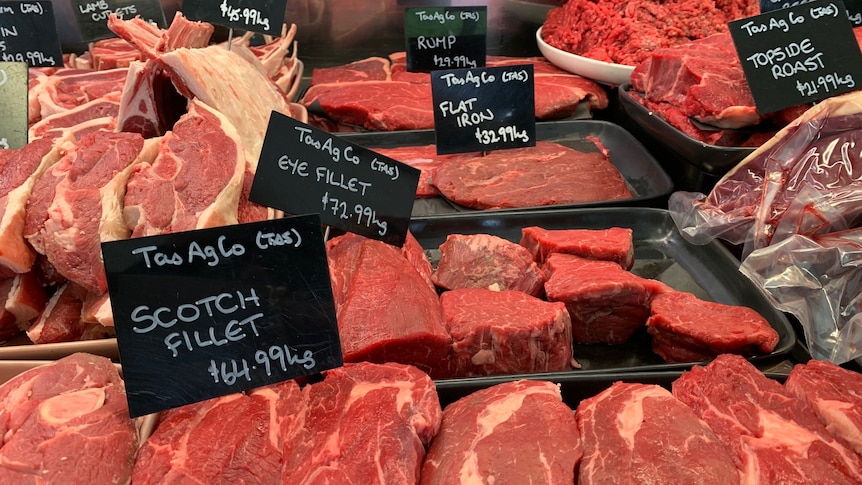 Australia’s red meat industry has set a bold goal of being carbon neutral by 2030.

But Tasmanian graziers Sam and Steph Trethewey want to go beyond neutral and sequester more carbon than their beef operation emits.

They call it carbon positive.

“When you look at the enormous task that we have to try and curb climate change, carbon neutral isn’t going to be good enough; we’ve got to be net positive, we’ve got to go that extra mile,” Mr Trethewey said.

The couple moved to Tasmania two years ago after buying a 175-hectare farm at Dunorlan in the state’s north.

“It’s scary. We’ve got an almost three-year-old and a 12-month-old. What’s it going to look like for them?” Ms Trethewey said.

The adoption of regenerative farming methods is growing in Australia.

The Tretheweys are doing it by improving farm ecology, planting trees, not using artificial fertiliser, and by building soil carbon by sowing diverse plants into their pastures.

The Tretheweys call it a “salad bowl” buffet for the cattle.

“We’re 100 per cent committed to trying to restore the landscape and reintroduce biodiversity to the soil,” Mr Trethewey said.

Grass pastures have been over-sown with “multi-species” seed mixes containing up to 25 different plants, including legumes to fix nitrogen and deep-rooted plants, brassicas, grains, and grasses.

The plants remove carbon dioxide (CO2) from the air and sequester it through their roots, burying it deep in the soil.

The Tretheweys’ farm agronomist Robin Tait said: “When we have monoculture pastures, we’ve got only one level of roots, so they’re only bringing carbon down into one level. When we’ve got the multi-species, we’ve got deep roots, medium roots, short roots, and so we can bring carbon at different layers into our soil profile.”

In 2019, the Tretheweys became the first Tasmanian farmers to register a soil carbon project with the federal government’s emissions reduction fund.

“In the next two or three years, we might get 12 to 15 grand from our carbon credits, which isn’t to be sneezed at, but it isn’t about money, it’s about reversing climate change and having a more productive farm,” Mr Trethewey said.

Cows part of the solution

The beef industry has been portrayed worldwide as a climate change villain because of the methane cattle emit.

But cattle are central to the Tretheweys’ carbon capture method.

The animals are moved to fresh paddocks every few days for short periods of high-intensity grazing.

“We can’t actually do what we do without the cows. We need them to eat the top of the plants to regenerate that growth and turbo-charge the soil and the plant,” Ms Trethewey said.

“We need ruminant grazing animals to store carbon, and that’s what flips the whole ‘beef are bad for the planet’ argument on its head,” Mr Trethewey said.

“What we’re seeing now is the industry is starting to talk back and find its feet as to what its answer actually is to those allegations, and I really believe regenerative agriculture is global agriculture’s answer to the climate crisis.”

After two years, the farm’s soil has improved, organic matter and fertility have increased, and so has the number of earthworms.

It is a big change for Brian Morice, who worked on the property for nearly 40 years.

He and quite a few locals thought the couple were crazy mainlanders.

“I probably shouldn’t say that, but I thought they’ll be here for a short time, then they’ll be gone,” he said.

“I thought they were dreaming because it was totally against what I’d always been taught.”

Mr Morice is working for the Tretheweys and is no longer a sceptic.

“It’s interesting to see multi species sown 18 months ago, and you dig around and find roots down half a metre deep,” he said.

It sells a variety of organic, free-range, sustainably grown meats.

Her customers are asking more questions about the climate impact of the meat they are buying.

“Climate-friendly beef and climate-friendly products across the board in the meat industry are going to become really important as people start to understand the implications of what climate change means and how it’s going to change the way we eat,” Ms Wills said.

In a post-Glasgow summit world, Australia’s beef producers fear being penalised by export customers if they cannot prove they are decarbonising their industry.

Which is why key industry figures have visited the Tretheweys.

They might be running a cheeky start-up, processing just three carcases a week, but they say the system can easily be scaled up.

They are on that path, doubling acreage by buying two new farms and building the herd to 2,000 head.

But Ms Trethewey wants more farmers to join them.

“We need to feed the world,” she said.

“We totally get it. We have to do this on scale.

“We need to get more land and bigger producers doing this in a big way.”

Watch this story on ABC TV’s Landline at 12:30pm on Sunday, or on iview.