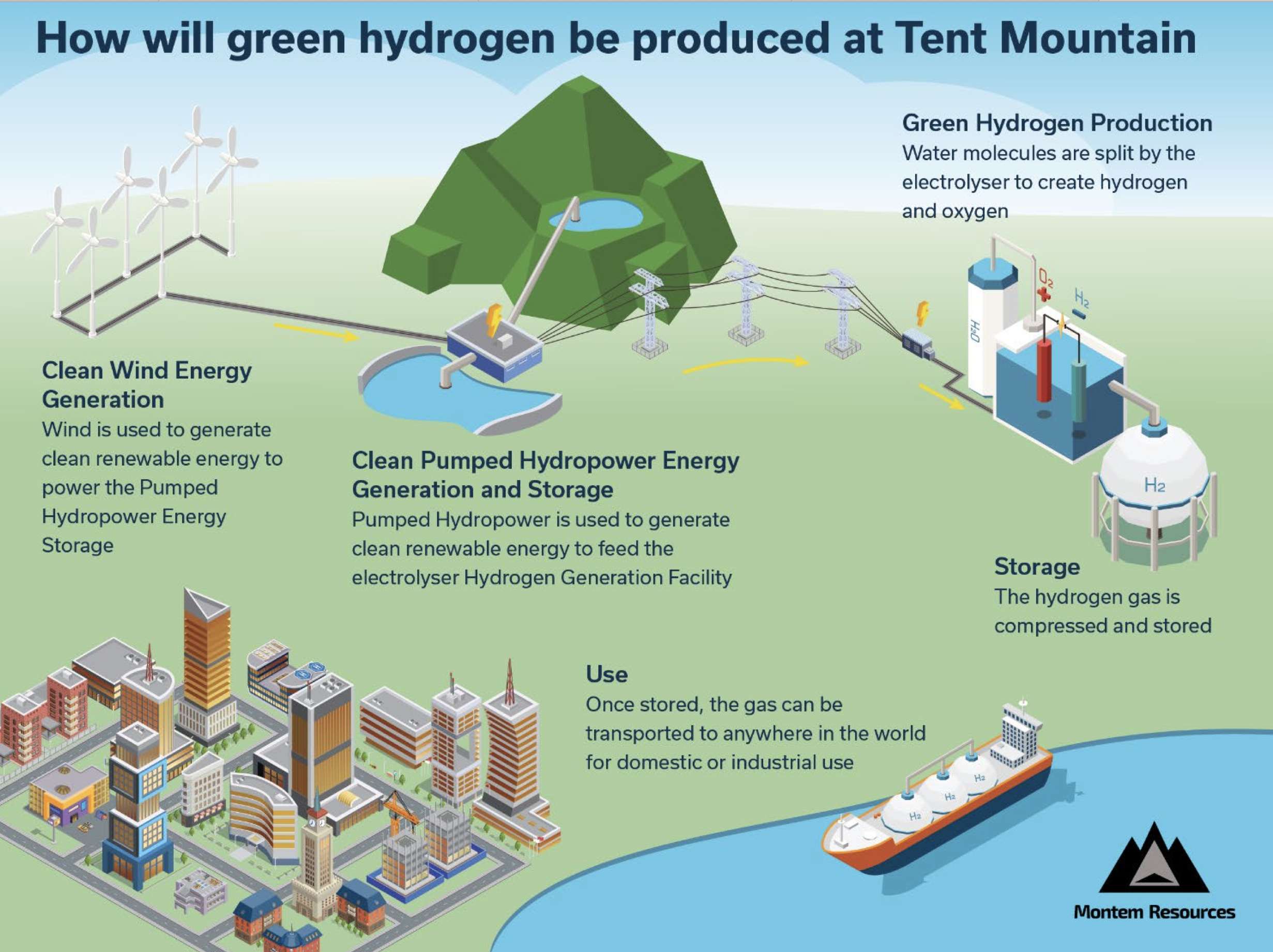 Pitch to morph Canadian coal mine plan into renewables project: Montem Resources has proposed revamping its proposed Tent Mountain metallurgical coal project into a renewable energy project featuring a 320 megawatt (MW) pumped hydro project, a 100 MW electrolyser to produce hydrogen and an offsite 100 MW wind farm. The company said repurposing the former coal mine site to provide pumped hydro storage was made attractive by Alberta’s need for energy storage as it phases out “all coal fired power plants this decade”. The company had previously sought to develop an open pit mine at the site but faced considerable public opposition. In June 2021 both the federal and provincial governments rejected the nearby Grassy Mountain coal project.

Montem Resources Limited (ASX: MR1) (“Montem” or the “Company”) is pleased to announce plans to transition its Tent Mountain Project in Alberta, Canada to become a renewable energy complex.

Montem is progressing development plans for the Project and is working with the Piikani Nation. The Piikani Nation and Montem have agreed to explore the mutual benefits of the Project, and to investigate the development of a wind farm to supply electricity to the Tent Mountain PHES. Montem has applied to Canada’s Clean Fuels Program for C$5 million to help fund the next phase of work, which will include a Feasibility Study.

Montem Resources Managing Director and CEO Peter Doyle said: “Developing Tent Mountain as a renewable energy complex could result in the first large scale production of green hydrogen in Canada. Furthermore, the PHES component of the complex will play an important role in filling supply gaps in Alberta’s electricity grid. We are re-purposing our existing assets at Tent Mountain, which include large water reservoirs on land we own, and easy access to infrastructure, including rail, high voltage power lines, gas pipelines, and the interprovincial highway.

“We started looking at an end of mine life pump hydro for Tent Mountain in 2019, undertaking a site assessment and economic analysis. The results were promising, and we continued to progress Tent Mountain as a coal mine re-start. With the current uncertainty surrounding the timeline of the mine re-start, we have bought forward the planning for developing Tent Mountain into a renewable energy complex and are now moving to a Feasibility Study.”

“The Tent Mountain site has inherent advantages for a large renewable energy complex, including a 300m drop between two reservoirs that were formed during previous mining operations, and are on land owned by Montem. The site is within 10km of the Alberta ‘s high voltage electricity grid, has great existing infrastructure to support development, is adjacent to rail and gas pipelines, and

has plenty of space to develop a green hydrogen plant that will run off the renewable power we produce.”

“We have applied for a federal grant from the government of Canada to assist in funding the project through the Feasibility stage which is expected to take 12-18 months. The various technical, economic, and social studies we have completed over the past six months show technical viability, and strong returns over a 50+ year project life. The Project will include a 320 MW PHES, a 100 MW green hydrogen electrolyser, and a 100 MW wind farm.”

“We are very excited about the future of this project and look froward to advancing it.”

A study conducted by Entura Hydro Tasmania (Entura) in 2019 found Montem could use existing water reservoirs from Tent Mountain’s historical coal mining operations to drive a powerful PHES facility. The study demonstrated an energy in storage potential for the Project of 2,560MWh, or enough energy in storage to generate 320MW for eight continuous hours, which is the equivalent of powering approximately 200,000 homes through the night.

The Entura study found the proposed Project had no fatal flaws and recommended progressing to the next step which included, refining the details of the site, identifying any additional risks, and determining mitigation measures, before embarking on a Feasibility Study. This work has now been completed. Over the past six months, Alberta based Boost Energy Ventures (Boost), have conducted various economic, grid connection and permitting studies to complement the initial Entura report. These reports have culminated in the Tent Mountain PHES passing through initial stage gates with it now ready to progress to Feasibility studies.

Power grid analysis by Boost showed the requirement for baseload power replacement in Alberta, and grid firming mechanisms as the system transfers from coal fired power to renewable power. Baseload power for Alberta’s grid has traditionally been produced from coal fired power plants which are in the process of being completely phased out. Whilst natural gas may appear the logical physical replacement for baseload power, the uncertainty around CO2 taxation schemes and potential carbon capture requirements is causing significant investment uncertainty for power companies in Alberta. Recently the $1.6B Sundance 7 gas fired power plant was cancelled by TransAlta due to the uncertainty of Canada’s CO2 tax system.

Alberta’s incumbent power companies are turning to renewables such as wind and solar to supply more power to Alberta’s grid. Wind and solar power’s reliance on weather conditions make both sources of energy inherently intermittent and causes both to rely heavily upon large scale energy storage (batteries). The most cost-effective form of this large-scale energy storage is Pumped Hydro Energy Storage (PHES) which can dispatch renewable energy on demand and provide the required stability to Alberta’s power grid. Lithium-ion batteries provide short-term storage, but there is a material shortage for long duration storage which is the sweet spot for pumped hydro. Given the relatively flat lying topography for the majority of Alberta, Montem’s Tent Mountain Project is a rare opportunity to develop PHES in the Province.

In addition to the work completed to understand the potential of the Tent Mountain PHES, earlier in 2021 Montem commissioned GHD to investigate the potential for green hydrogen production at

Canada’s aim of “Net-Zero by 2050” brought into legislation last year with the Canadian Net-Zero Emissions Accountability Act can only be met with a range of new renewable energy projects. The production of green hydrogen is a key component of meeting this goal. By including modern electrolyser technology to produce green hydrogen as a component of the Tent Mountain Renewable Energy Complex, we capitalize on reliable cheap green energy, and access to a growing market via adjacent rail and gas pipelines.

With the renewable energy transition gathering pace in Alberta, Montem believes we have a unique opportunity to transition Tent Mountain from an idled historical coal mine to a clean renewable energy complex. We are working closely with the Piikani Nation whose traditional territories we operate on, and we have agreed to explore the mutual benefits of the Tent Mountain Renewable Energy Complex. The Piikani Nation’s reserve lands lie in the heart of southern Alberta’ s wind power generating region, and we look forward to investigating the potential to power the PHES with wind power produced locally.

The rapidly emerging hydrogen economy has significant investor and policy support. Canada has legislated support for developing green hydrogen, and Montem recently applied to the Clean Fuels Program for C$5 million in grants to undertake the next phase of study into the Tent Mountain Renewable Energy Complex. This grant program has been designed to accelerate development of green fuels, including hydrogen. Montem expects to be successful in this grant application, with grants awarded in Q1 2022 after a 3-4 month selection process. In the meantime, Montem will progress with Feasibility planning for this exciting new prospect.

For further information on the Company, our assets and development plans, please visit our website: www.montem-resources.com

This ASX release was authorised on behalf of the Board of Directors by Peter Doyle, Managing Director and CEO.