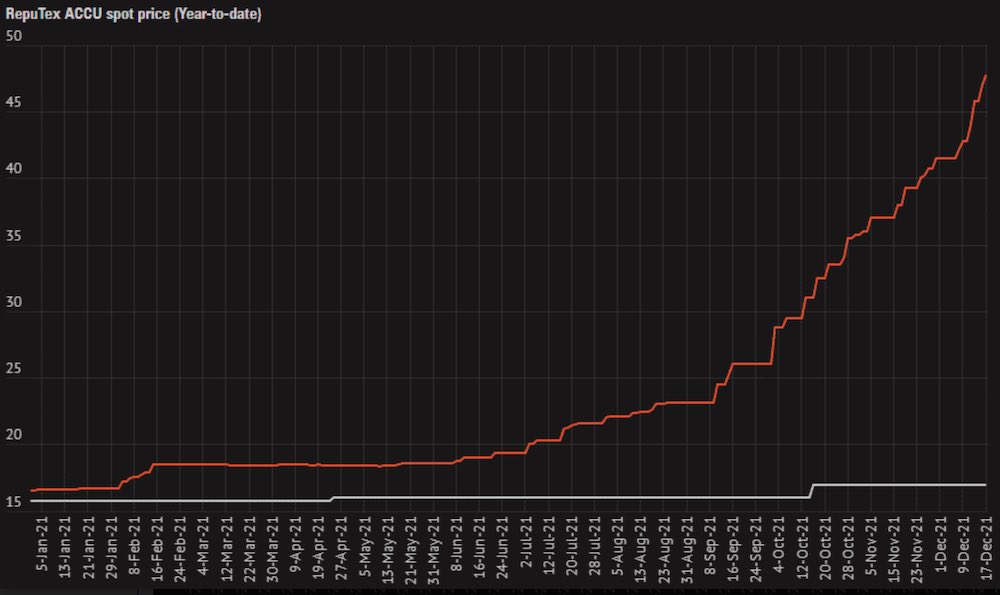 A surge in demand for voluntary carbon offsets, underscored by a raft of corporate net-zero emissions pledges, has pushed Australia’s de facto carbon price to a new high, paving the way for a market “supercycle,” despite the lack of a targeted federal policy.

New research from carbon market analyst RepuTex shows the carbon market has experienced a “major bull run” over the course of 2021, with prices for Australian Carbon Credit Units (ACCUs) soaring by more than 180% to $A47 per tonne.

Reputex says the price jump has been bigger than even the European carbon market, which is backed by strong EU policies, and where prices recently closed in on €90 ($A142), before falling back toward €80 ($A126), for growth of 146 per cent, year on year.

Australian prices are headed even higher, according to RepuTex, whose latest outlook has forecast that the medium-term ACCU price will rise to $A60/t, driven by growing investor participation and bullish sentiment around net-zero targets.

“As companies pursue a net-zero pathway, a carbon ‘supercycle’ is almost inevitable, with voluntary demand to outpace supply, driven by a raft of corporate pledges which have come about at a rapid pace” said Reputex executive director Hugh Grossman.

“The surge in voluntary buyers – both corporates and investors – has triggered a structural change in demand that is unlikely to be met by short-term supply, suggesting a sustained period of higher prices could be on the horizon.

“While many companies are utilising cheaper international offsets to comply with their immediate voluntary targets, most are also building a pipeline of ACCUs to protect their forward positions.

“This should continue to place upward pressure on prices, supported by increasing investor capital as banks, speculators and trading houses seek to access the low carbon transition.”

But Grossman stresses that the alignment of federal government policy with corporate commitments to reach net-zero emissions by 2050 will be highly important to the ongoing progress and stability carbon market in Australia.

“We believe it is increasingly likely that the Regulator will provide project owners with flexibility to redirect supply away from the Commonwealth toward private buyers,” said Grossman.

“Providing project owners with optionality to unlock supply from some contracts is far more preferable than sellers going rogue and breaking their contracts, which will erode the integrity of the government’s contracting scheme.

“The design of a transparent net-zero pathway is critical to guide the timing of long-term planning and capital investment decisions, and to ensure investment is directed to the technologies and carbon offsets that can best support Australia’s low carbon transition.

“An orderly transition is always the cheapest.”

They may be good news for developers of carbon offset projects, but Australia’s soaring carbon credit prices could present new difficulties for the Morrison government’s already threadbare climate change policies.

Under the Emissions Reduction Fund, administered by the Clean Energy Regulator, the federal government has directly contracted for the purchase of ACCUs – a form of carbon offset – from emissions reduction projects.

Eligible projects include avoiding land clearing, revegetating land, or cutting emissions from landfill sites. The Morrison government has expanded the program to include carbon capture and storage projects.

To date, the Clean Energy Regulator has used the Emissions Reduction Fund to enter into contracts to purchase around 230 million tonnes of emissions reductions, with a total contracted spend of $2.6 billion, which the government says will help ensure Australia meets its 2030 emissions reduction target.

The regulator has paid an average price of around $12 per tonne to date.

But a surge in demand from corporate emitters searching for offsets has sent ACCU spot prices rocketing past $40 per tonne – and it could see abatement projects choose to activate a ‘non-delivery’ clause in the government contracts to take advantage of these higher market prices.

While the regulator remains by far the largest buyer of ACCUs, a burgeoning voluntary market has also emerged, with corporate emitters turning to ACCUs as a straightforward way of offsetting their greenhouse gas emissions.

Due to the entry of these corporate emitters into the voluntary market, ACCU prices have surged to levels substantially beyond prices being offered by the Clean Energy Regulator, more than doubling in value since the beginning of the year.

The high prices could see a significant number of offset projects decide that they won’t fulfil their Emissions Reduction Fund contracts, which offer a fixed price that was locked in when market prices were substantially lower.

In an update published in October, the Clean Energy Regulator said that contracts for around 74 million ACCUs had been fulfilled, meaning there could be contracts for more than 155 million tonnes of abatement at risk of deliberate default.

Under the terms of the ‘fixed’ contacts, which cover the vast majority of contacted abatement purchased by the federal government, offset projects must pay a penalty to the Clean Energy Regulator if they fail to deliver on the contract.

The contractual penalty, called “buyer’s market damages”, is designed to provide funds for the Clean Energy Regulator to purchase offset units from elsewhere, at the expense of the project failing to deliver on its contract, as a form of insurance to ensure replacement offsets can be secured.

According to the terms of the carbon abatement contracts, the maximum extent of the damages payable is fixed at the agreed offset price under the contract. For most contracts under the Emissions Reduction Fund, this falls within the range of about $12 per tonne.

Therefore, defaulting on the contract would attract an initial loss for a project of around $24 per tonne, with projects losing the average $12 per tonne payment they would receive for fulfilling the contract and a further $12 per tonne in payable to the regulator as buyer’s market damages.

But with ACCUs now trading above $40 per tonne in the open market, offset projects could choose to sell their ACCUs in the market, rather than the regulator and still walk away with a profit, even after the penalties are paid.

For example, if a project could sell its ACCUs at $40 each, it would secure a neat $16 per tonne profit after penalties (on a $12 per tonne government contract), and lost payments are accounted for.

The managing director of Market Advisory Group, Raphael Wood, cautioned that such a decision from offset projects could see ACCU spot prices pushed lower, and other risks need to be considered before a project decided to active the non-delivery clause.

“If triggered, the non-delivery clause can provide greater ACCU liquidity to the market, but the decision to do that would still need to be one that project developers would need to make in consideration of its business model and its relationship with the Clean Energy Regulator,” Wood told RenewEconomy

“But, speculative ACCU buyers should be aware that there is this source of ACCU supply that could enter the market in response to high market prices.”

But Wood added that the activation of the non-delivery clause in the carbon abatement contracts could deliver a win-win for offset projects and the regulator.

“This is an existing contract condition that helps mitigate the risk of high ACCU prices, meaning that this is a known option to the market and has largely already been factored into investment decisions,” Wood said.

“The funds collected by the Clean Energy Regulator could be used to booster the Emissions Reduction Fund, supporting the regulator’s ability to act as a ‘buyer of last resort’ to maintain demand the ACCUs, while project developers would get a greater return for the ACCUs, boosting funds flowing into regional areas.”

A spokesperson for the Clean Energy Regulator told RenewEconomy that it would look to enforce the contracts signed by abatement projects but had not yet seen any projects default.

“No contract holders have sought to become subject to Buyer’s Market Damages under the ERF.”

The Emissions Reduction Fund was established by the Abbott government in the wake of the repeal of the carbon price mechanism in 2014 and has served as the Coalition’s primary policy for securing emissions reductions.

Last year, the Clean Energy Regulator began offering ‘optional’ delivery contracts under the Emissions Reduction Fund, meaning projects could decide not to fulfil their contracts without facing a penalty.

It is reflective of a broader shift in focus from the Morrison government, which appears satisfied to allow the private sector to voluntarily drive demand for carbon offsets, rather than seeing the government – and taxpayer – foot the bill.

“What matters for abatement is that the projects occur and ACCUs are issued. Contracts are a separate matter,” the Clean Energy Regulator spokesperson added.

However, it does raise questions about the ability of the Morrison government to deliver on its emissions reduction targets, having previously stated it planned to purchase more than 100 million tonnes of emissions reductions using the Emissions Reduction Fund to meet its 2030 emissions target.

Good, independent journalism takes time and money. But small independent media sites like RenewEconomy have been excluded from the millions of dollars being handed out to big media companies from the social media giants. To enable us to continue to hold governments and big business to account on climate and the renewable energy transition, and to help us highlight the extraordinary developments in technology and projects that are taking place, you can make a voluntary donation here to help ensure we can continue to offer the service free of charge and to as wide an audience as possible. Thank you for your support.