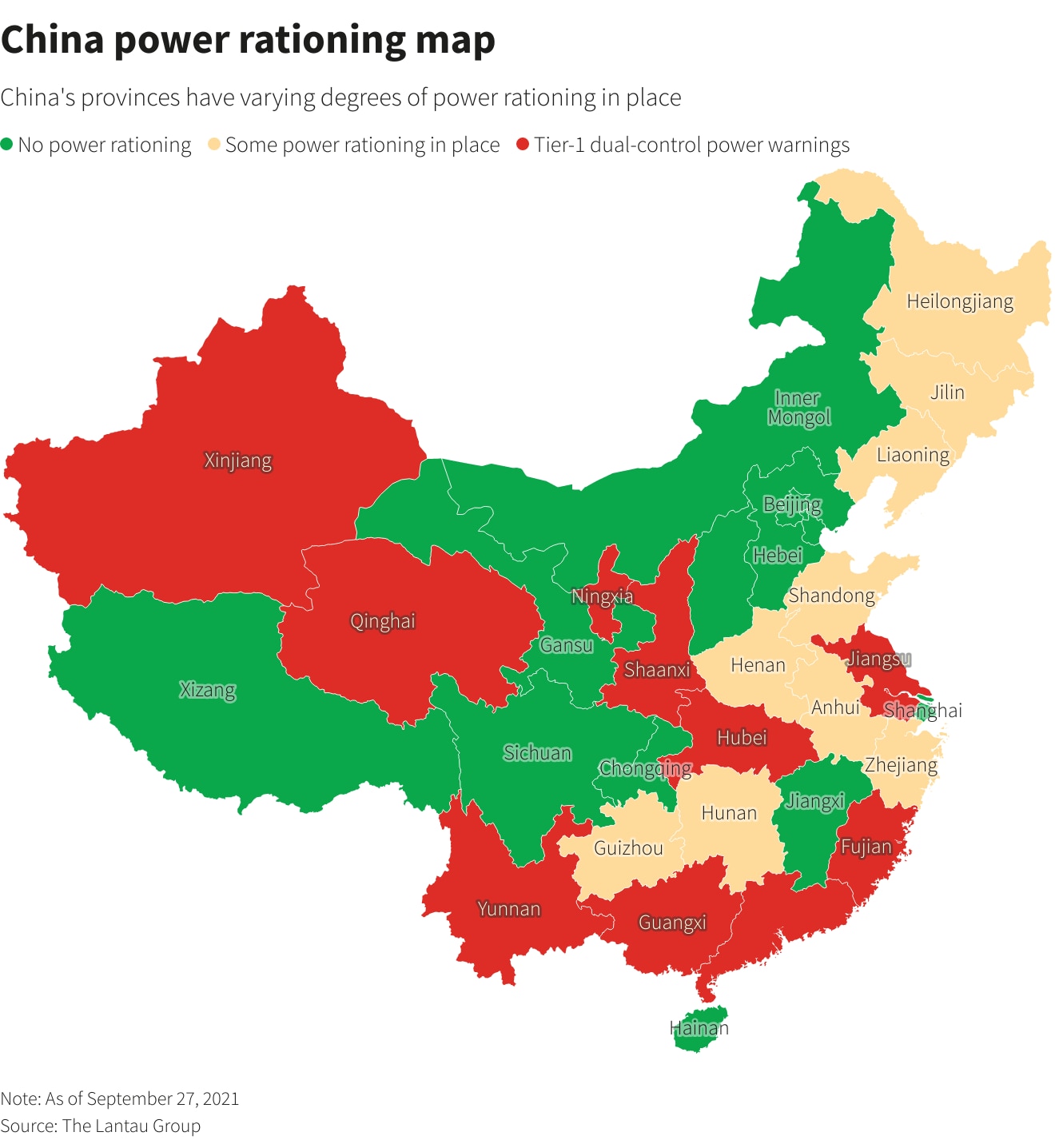 By Gabriel Crossley and Shivani Singh

SHENYANG, China, Sept 29 (Reuters) – China on Wednesday demanded railway companies and local authorities raise their game in shipping vital coal supplies to utilities, as regions key to the world’s no. 2 economy grapple with power cuts that have crippled industrial output.

The order, handed down from China’s powerful state planner, comes after a collision of tight coal supplies, tougher emissions standards and strong manufacturing demand has pushed the price of coal, the biggest source of China’s electricity, to eye-watering records – just as winter approaches.

Thermal coal futures in China hit an all-time high of 1,376.8 yuan ($212.92) per tonne earlier on Wednesday – adding yet more pressure on power utilities unable to recoup added fuel costs. Curbs have been imposed on power use in large swathes of the country, especially three northeastern provinces that are home to nearly 100 million people.

“If there’s a power cut in the winter then the heat stops too,” said Fang Xuedong, 32, a delivery driver in Shenyang, the capital of Liaoning province, about a 90-minute flight northeast of Beijing.

“I have a kid and an elderly person at home, if there’s no heat then that’s a problem.”

Growing alarm among residents at the power crunch, now in its second week, comes as the state planner – the National Development and Reform Commission (NDRC) – formally urged local economic planners, energy administrations and railway companies to beef up coal transportation to meet citizens’ heating demand during the winter season.

“Each railway company should strengthen coal transportation to power houses (utilities) with inventory of less than seven days and launch the emergency supply mechanism in a timely manner,” said the NDRC.

China, the world’s top coal consumer imported a total of 197.69 million tonnes of coal in the first eight months of 2021, down 10% year-on-year. But August coal imports rose by more than a third on tight domestic supplies.

Officials this week have repeatedly sought to assure residents that there will be power for household use and for heating as winter approaches.

But power rationing has been implemented during peak hours in many parts of northeastern China since last week, with news reports and social media posts signalling outages of traffic lights and 3G communications networks in the region.

The NDRC said later on Wednesday the government would not stop electricity prices from floating within a reasonable range and would let them reflect market fundamentals and changes in cost.

The curbs also continue to affect heavy industry, such as metal production, and manufacturers.

An internal document from a large technology components maker in China reviewed by Reuters said more than half its daily production in Kunshan, in the eastern industrial province of Jiangsu, had been suspended since earlier this week.

Meanwhile in Foshan, in southern China’s bustling province of Guangdong, the company was only allowed to produce late at night and in the early morning from mid to late-September, according to the document, which said manufacturers were “ambushed” with the new restrictions.

“This power shortage will carry huge economic and political implications. But let’s set the record straight, the root cause is high coal price, NOT climate policies,” Li wrote in a Twitter post this week.

“If anything, the power shortage demonstrates the importance of moving away from coal, that a fuel that has been the code word for energy security is not secure at all.”