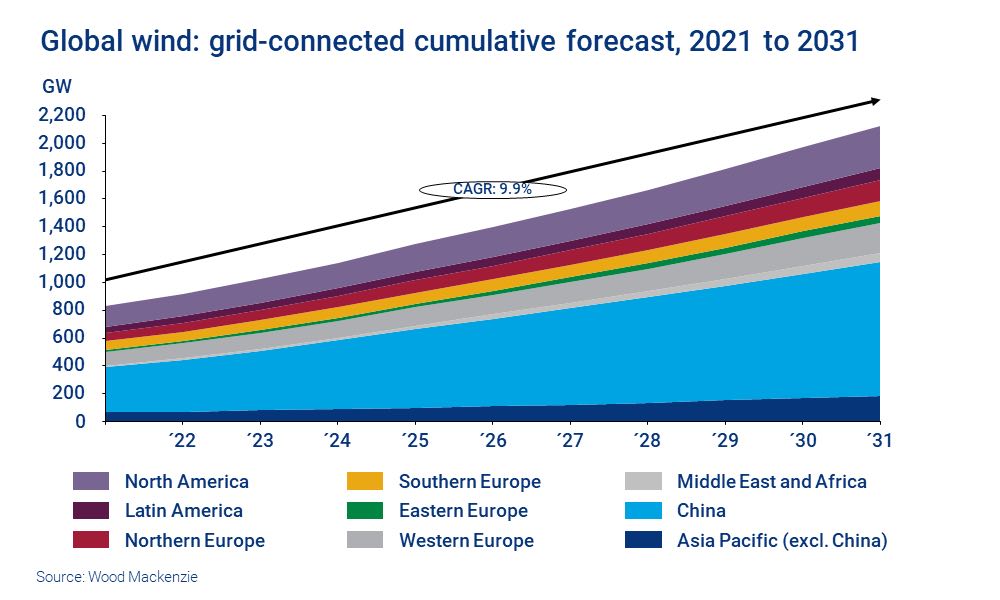 The recent passage of positive climate policies around the globe is expected to help drive growth in the wind energy sector, according to the most recent outlook from clean energy analysts Wood Mackenzie.

In the latest update to their wind outlook, Wood Mackenzie says it expects that “new climate policies and aggressive strategies across the Americas and Europe” will result in a 1.9% increase of installed capacity, quarter on quarter.

This would equate to 25.6GW of new capacity each quarter between 2022 and 2031, which in turn would push combined capacity over the next decade up to around 2,000GW.

Key amongst the policies driving expanded wind growth is the passage of the politically named Inflation Reduction Act (IRA) in the US.

“The Inflation Reduction Act (IRA) establishes long-term investment stability in the US, with more than 5GW of the 6.8 GW upgrade QoQ expected from 2028-2031,” explained Luke Lewandowski, Wood Mackenzie research director.

“Procurement activity in Quebec and a robust pipeline in Alberta will trigger a 2.5 GW upgrade in Canada, strengthening its position as a top 20 global market.”

New and strengthened policies in Germany, France, and Greece, and project concessions and awards in Finland, Denmark, and the UK, have helped boost Europe’s own wind energy sector.

Similarly, short-term European growth is certain thanks to recent awards. The United Kingdom, for example, awarded a total of 8.5GW worth of new wind capacity in July, alone – 7GW worth of offshore and 1.5GW onshore.

The same could not be said for Eastern Europe, however, where Russia’s invasion of Ukraine has had a negative impact on the domestic renewables market.

China remains the dominant long-term player with renewable targets from the provincial governments in their 14th Five Year Plan requiring 60-70GW of new wind capacity added each year by 2025. Short-term concerns remain, though.

“Offshore project disruption in China caused by typhoons, supply chain challenges and Covid-19 outbreaks has put even greater pressure on completing projects before 2026 as the 14th Five Year Plan ends in 2025,” said Lewandowski.

In the rest of the Asia Pacific, the outlook is not quite so robust. For this region, the outlook downgraded “due to the state utility in Vietnam not recognising new wind power over grid stability concerns, but also due to slow market development in Japan and project adjustments in South Korea,” Lewandowski said.