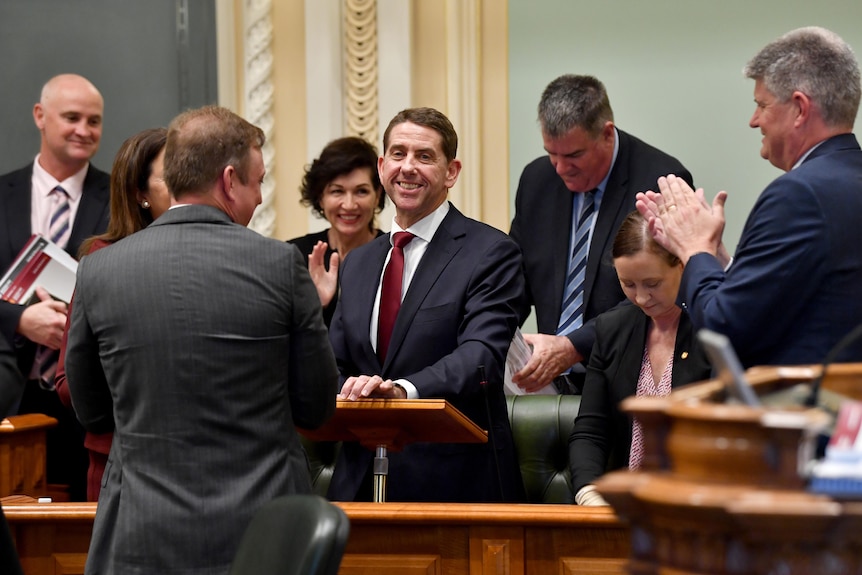 Queensland Treasurer Cameron Dick was applauded by his colleagues for the recent budget but the coal industry was less impressed. (AAP: Darren England)

How much is Queensland’s bottom line powered by coal royalties?

Posted Yesterday at 7:04am

When Queensland’s Treasurer unveiled one of the biggest shake ups to coal royalty rates in a decade it was never going to be warmly welcomed by the mining sector.

Cameron Dick revealed in his third state budget a new royalty regime would kick in once an existing freeze expired at the end of June as the sector benefited from unprecedented windfall prices as high as $500 a tonne.

The move is expected to inject an additional $1.2 billion into Queensland coffers over the next four years through to 2025-26.

The Treasurer has repeatedly pointed out it was only fair that when mining companies are making record profits, the state should also be able to reap more to reinvest into services.

After all it’s Queenslanders who own the resource that the miners are making money from.

The old royalty scheme was capped at a top tier of $150 per tonne with royalties charged at 15 per cent of the value of coal.

This meant the state wasn’t receiving more revenue when coal prices were at record highs.

The changes from July, meant three new tiers were added to the existing royalty structure:

Criticism from the mining industry was swift; Queensland Resources Council (QRC) chief executive Ian MacFarlane labelled it a “kick in the guts” which would see theworld’s highest royalty taxes imposed.

He said the industry wasn’t consulted on the “misguided” policy and it would impact future investment from multinational coal companies.

In a speech to the University of Queensland in July, Japanese ambassador to Australia Shingo Yamagami warned it could impact the state’s relationship with Japanese companies and it would have “a huge impact on mining companies’ bottom line”.

This month, mining giant BHP blamed the royalty hike for pausing new coal investments in the state including a proposal for a $1 billion coal mine in central Queensland.

Company chief executive Mike Henry made the comment during the release of BHP’s financial results where it posted its highest annual profit since 2011, where its full-year attributable profit surged 173 per cent to $US30.9 billion.

The resources industry is a big contributor to the Queensland economy, and its royalties are often touted as propping up the state’s budget.

But how reliant is Queensland’s bottom line on coal royalties?

Apparently not as much as some think.

Coal royalties in the past five years have on average generated 6.4 per cent of the state’s total revenue.

In that time period total revenue for Queensland was about $311 billion, with coal royalties generating $19.9 billion.

Professor John Quiggin from the University of Queensland’s School of Economics said GST was the biggest contributor to the state’s books.

“It’s GST — it’s the transfers done from the federal government, which collects the GST, to the state,” he said.

In this year’s state budget, grants revenue — which GST falls under — accounted for 47.7 per cent of the state’s total revenue in the past financial year.

The state is rich in high quality, metallurgical coal which is used for global steel production with Queensland accounting for 50 per cent of the world’s seaborne exported coal.

Mr Dick said metallurgical coal would continue to be an important part of the Queensland economy for decades as it would help countries transition to low carbon economies in the wake of climate change pressures.

“We still need steel to form part of that economy,” he said.

“To build the wind towers we need for renewable power generation, to build the electric vehicles we need, to build the railways, the trains, the heavy vehicles that will be fuelled by hydrogen.”

Mr Dick said mining royalties would continue to generate revenue for the state even when other types of coal like thermal are phased out.

“The nature of mining will change over time,” he said.

“There will be expansion into critical minerals for the new economy so that scandium, vanadium, cobalt, nickel, those things that we’re well known for will continue to be mined and they’ll be mined in larger quantities.

“I think that’ll give you an idea of how that will work in the future.”

As to whether there are any plans for a future tax or royalty scheme for the renewables industry?

“There are a number of steps we have to go through before we can look at what alternative revenue streams might exist, but the focus of the government is to establish and embed those industries in the Queensland economy first.”

It’s a space to watch.