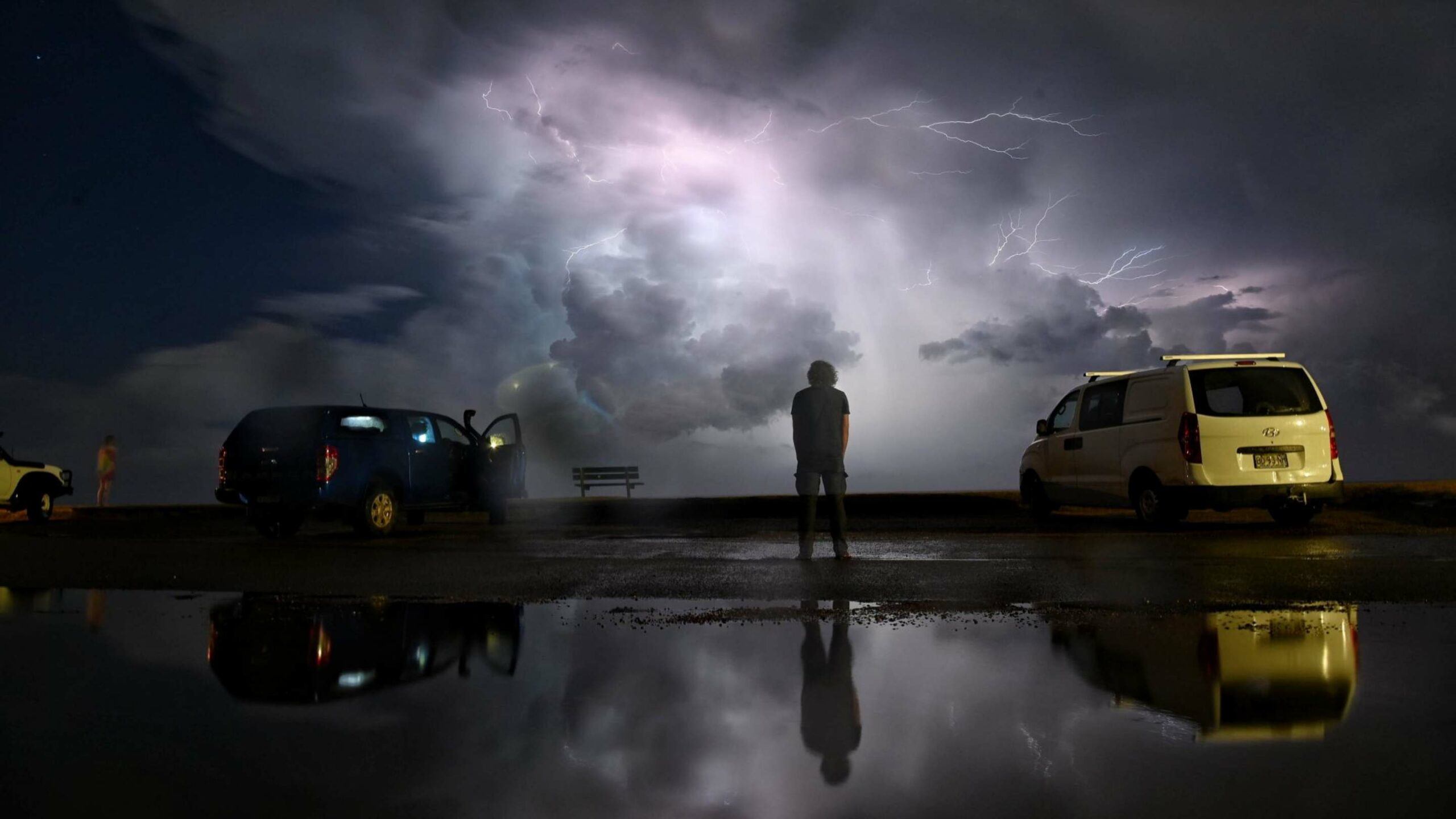 The storm left one person dead in Narrabeen after trees and powerlines fell as wind speeds reached 130km/h.

With a warming climate driving weather to new extremes, the Herald’s chief photographer Nick Moir spent much of the year battling giant hail, floods, huge waves and even tornadoes.

Two years ago we were staring down the barrel of an unparalleled bushfire threat following a vicious drought. Now we are coming out of the wettest November on record. Many of our rivers are flooding. Bureau of Meteorology alerts have been laced with tornado threats and giant hail warnings.

I’ve covered severe weather, droughts and fires for a quarter of a century, and in recent years it seems each season brings us new extremes.

So this year what happened?

Strong westerly winds which surround Antarctica appeared further south than usual, driving yet more moisture to feed into the Queensland and NSW interior, an event known as a positive Southern Annular Mode.

All this combined to cause floods and violent thunderstorms.

“All the ingredients were there this year,” says Weatherzone meteorologist Ben Domensino.

From September on meteorologists noted an increase in severe storm activity driving across the state.

On radar screens these weather patterns appeared with a “hook echo”, the signature of the sort of strong rotation that can cause tornadoes, and sure enough tornadoes did hit towns across the state including Bathurst and Armidale.

To cover one outbreak at the end of September I based myself in far west NSW near Bourke when atmospheric instability and wind shear (increasing winds at height) suggested strong storms were likely to hit.

I managed to place myself on the north-west edge of a violent system. At one point I found myself in the perfect position to witness the storm, but unable to move through it due to the lack of roads in the area.

After one front roared over I measured hailstones that ranged from 7cm to 11.5cm. Fortunately, for Bourke residents, the storm passed them by about 30km.

Two weeks later a very distinctive hook echo developed on a storm in western Sydney. I approached it from the north to see a tornado developing in the storm structure.

So concerned was the BOM that it declared it a “Very Dangerous Storm” and issued a tornado alert.

Sydney got off lightly compared to Coffs Harbour on October 20 when a supercell storm dumped 30cm of hail, damaging homes, businesses and vehicles.

Many other severe storms hit the Liverpool Plains and surrounds the same day, some of them lasting hours and covering hundreds of kilometres.

On October 10 another surge of activity saw lines of storms dump rain across the central west near Mudgee.

I saw a funnel appear from one and drove towards the ground before I got lost behind a thick curtain of rain.

In the United States a series of unseasonably late and historically large tornadoes devastated towns across the mid-west in recent days. With the death toll now approaching 100, scientists are investigating the impact of climate change on the storms.

It is thought that the warmer northern winter is causing the violent weather season to extend into what were once quieter months.

Similarly in March, NSW went through a period of record-breaking daily rainfall totals, causing the worst flooding the Hawkesbury/Nepean river had seen in 30 years.

Parts of the Hawkesbury that just over a year earlier had been hit by the largest known bushfire in Australian history were lost under metres of water.

Thousands were forced from their homes across the east of the state.

Floods are challenging events for photographers to cover. It is difficult to keep cameras going and lenses unfogged while wading through fast moving water under drenching rain.

Several photographers had expensive equipment destroyed in the March floods. All of the dealt with the discomfort of feet left wet for too long and the danger of dodging detritus and sewage in flooded streets.

When the strong low pressure systems that caused the floods hit the coast, winds drove surf to new heights, stripping coastlines of sand and vegetation.

Surfers braved some of the brutal waves and photographers turned to drones to capture images of offshore breaks.

As the wet summer continues NSW firefighters are nervously eyeing off the burgeoning grass and undergrowth the rains have fostered.

In the wet conditions firefighters have fallen behind in hazard reduction work.