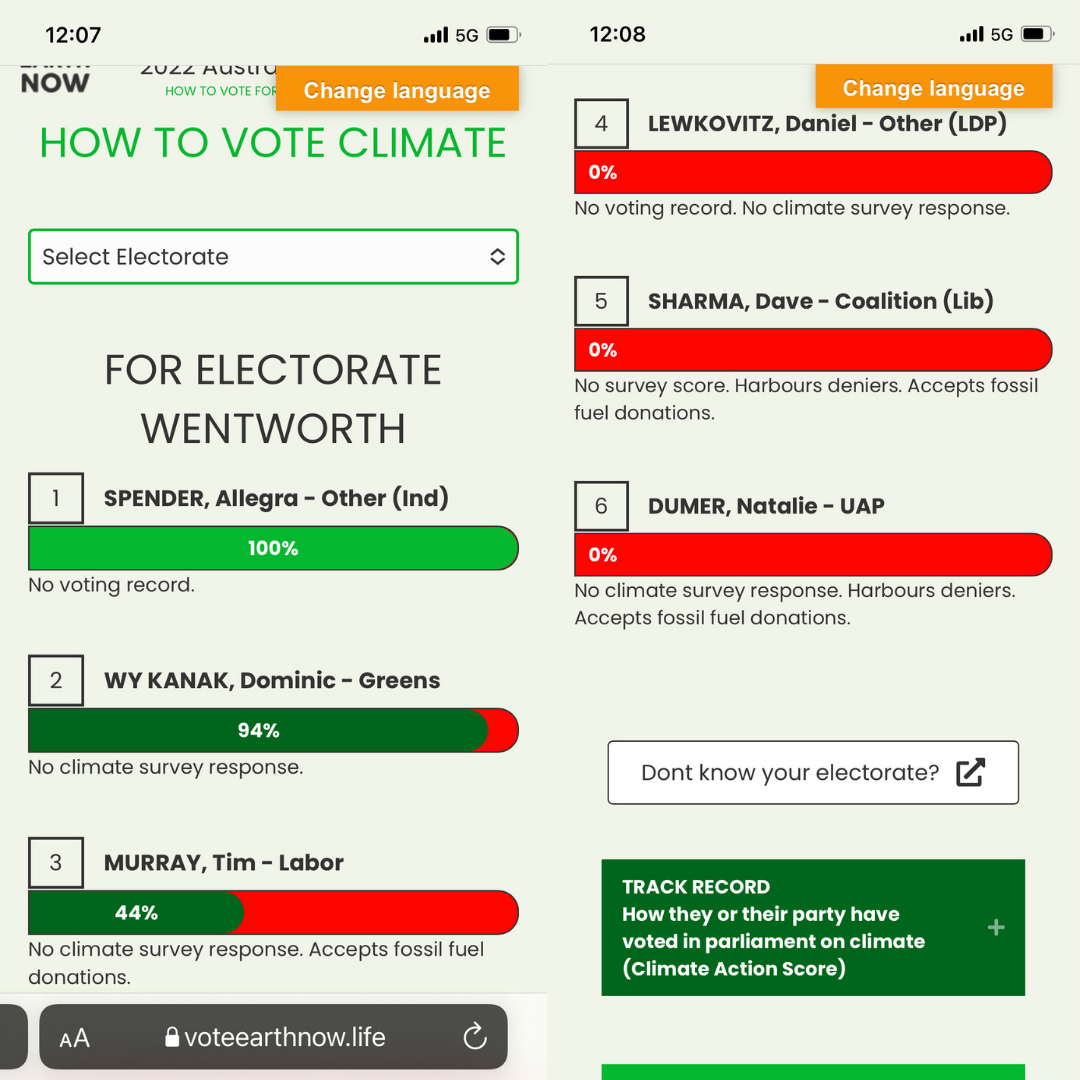 Image: what Wentworth voters will see on their mobile screen on election day when they vote using voteearthnow.com

We have chosen Wentworth electorate to showcase the power of voting for or, even more importantly, against a candidate based on their parliamentary voting record.

Where do the scores come from?

Ideally their score is based on how they’ve voted in parliament and any bills submitted. Where that was not possible we asked them how they would vote on key climate legislation. How their party votes also impacts their final score.

You may have some questions the first time you see your candidates for your electorate displayed alongside their record in this way.

How did the greens candidate, Dominic Wy Kanak, get 94% when they have never been in parliament?

This score is based on the track record of his party, the Greens, who have nearly always voted in parliament in support of pro-climate legislation and against anti-climate legislation.  We turn this voting record into our unique Climate Action Score based on the below criteria to make it easy for people to see and understand at a glance.

For each criteria we examine the Federal parliamentary voting record in Hansard through the website theyvoteforyou.org.au. This voting record is subjected to the ‘pub test’ by our ‘Brains Trust’ of impartial science, business, environmental and political pundits.

Why is the independent with no track record, Allegra Spender, first?

You may think these questions are easy but this is how they vote – Yes or No! It should be easy to vote for climate action.

How did Dave Sharma get 0% when he tells us he has been working tirelessly within the liberal party to change it? Why must I put him last?

Actually Dave Sharma got -33% but our scale only goes down to zero  (it’s negative because his party harbours climate change deniers and accepts fossil fuel donations). Dave Sharma gets the same score as every member of the Coalition (Liberal and Nationals) because they all vote the same way. There are severe penalties for voting against your party. This is why action on the climate crisis must not be subject to ‘party politics'(See story below). If Dave Sharma had ‘crossed the floor’ to vote against his party on climate he would have had a much better score.

If we all vote as depicted by voteearthnow.com we will send a clear message to both the Liberal AND the National parties.

In the case of a ‘moderate’ Liberal like Dave Sharma we will teach politicians they must succeed at changing their party so it achieves action. The Coalition has had 3 terms (9 years) to change from within. There is no time to have another try. We need action right now. Critical climate legislation must get through in the first 100 days. Moderates like Dave Sharma will have a great opportunity to change their party from within when in opposition.

This suggests the ideal scenario – climate should be a ‘bipartisan’ issue.

Australia’s sustainable transition should be run by a very strong very independent climate body with minimal government interference and clear scientifically based targets.

But I never vote greens?

It’s now or never for climate action. Australia will miss the boat if we don’t all vote in pro-climate candidates right now! Why not put the Independent candidate first?!

It’s now or never for climate action. Australia will miss the boat if we don’t all vote in pro-climate candidates right now! Why not put the Greens candidate first?!

Why do I put Labor (ALP) above Coalition(Liberal and National)- I’ve always voted Liberal?

Even if you subscribe to traditional Liberal party values you have realised by now they are not helping us achieve the climate action our country and the world needs.

The Labor party record (and platform) is not good enough on climate change however it is significantly better than the Coalition’s. If they are able to form minority government only due to minor parties and pro-climate-indepedents then climate will be an immediate priority of that new government. It will be clear to all that they have recieved that ‘mandate’. Their inadequate targets will require a lot of improvement to become those needed (as shown by the science), however they will at least be a starting point.

You might think “my family and friends are more important to me” than climate action. As long as they are OK the rest of the world is not my responsibility. This is actually wrong!. It is known as an ‘Island mentality’ and is a barrier to us safeguarding our own future.

Climate change is a truly global problem. If anything Australia will be more affected than some other countries. Just because we are such a wealthy country we are not protected in any way. In fact we are particularly vulnerable to geopolitical instability that is resulting from climate change. You cannot feel secure in your personal wealth with climate change creating mass migration and wars over resources.

You are putting your preferences clearly when you number the entire (small green) ballot paper. This ensures the winner of your electorate gets in by the will of the voters and gets a clear mandate to act urgently on climate.

There will be no need for ‘back room deals’ if there is a clear mandate in this way.

When voteearthnow.com started our campaign a little over 1 year ago, incumbent Wentworth parliamentary representative Dave Sharma began receiving hundreds of emails informing him that

“I have just pledged to be a Climate Voter on voteearthnow.com pledging my vote to the politician with the best track record of action against climate change (according to the Climate Action Score). “

His response was letters explaining how he had made speeches in parliament and the party room in support of climate action. Many climate voters responded to him with our recommended text:

” With all due respect, deeds count rather than words. I will watch with interest to see whether you actually back up your rhetoric with action , in particular your parliamentary voting record on the issues.”

Needless to say he continued to vote in parliament as directed by his party, exactly the same as, for example, Barnaby Joyce. The saying “you vote for Dave Sharma, you get Barnaby Joyce” has became prevalent.

His actual response to these emails (which should have been used to change his party from within) was to go after our source, theyvoteforyou.org.au, the wonderful website that translates parliamentarians’ voting record in Hansard into an understandable format. We then condense all climate change related Bills and Motions into our unique Climate Action Score.