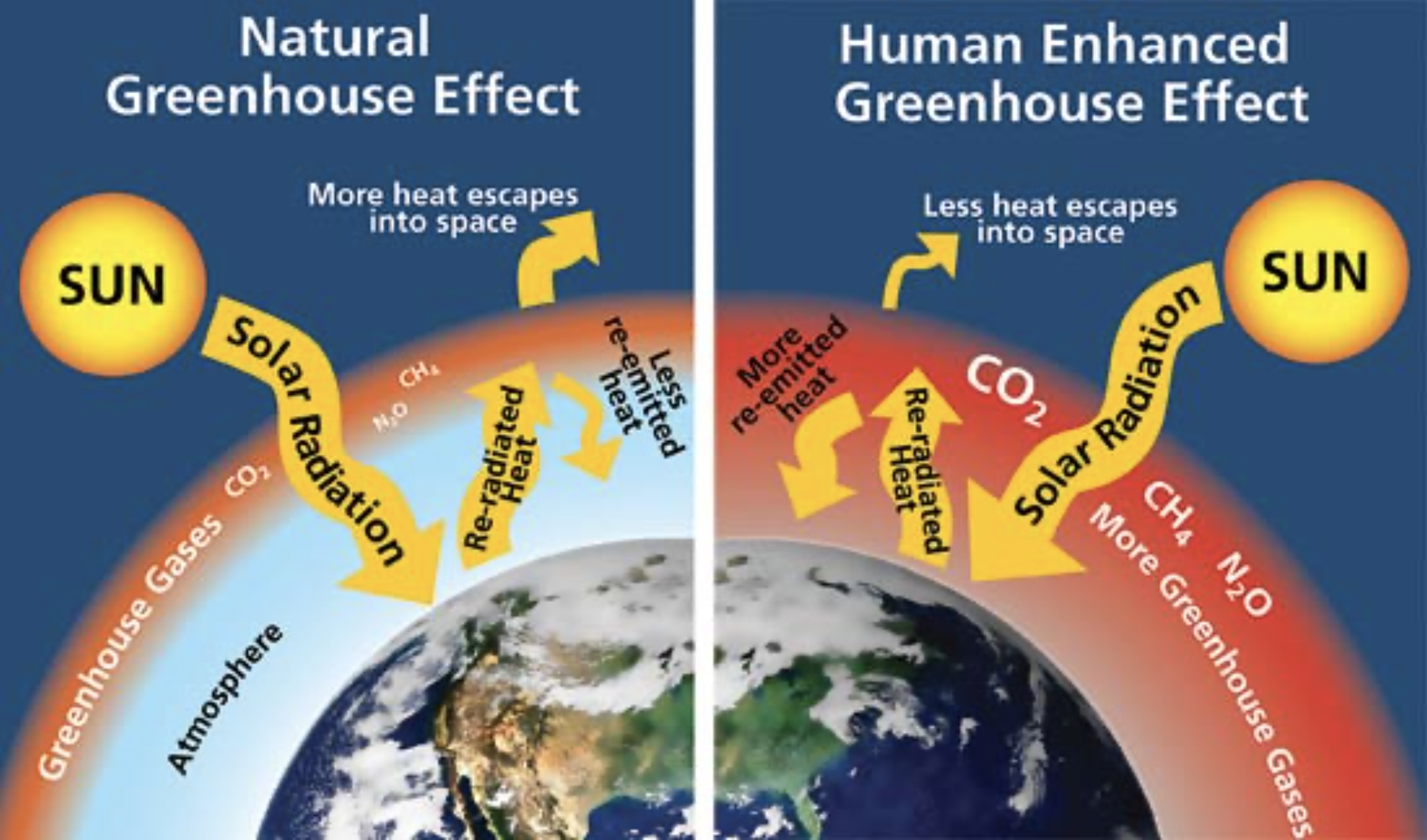 From Conservation in a Changing Climate

How Does the Greenhouse Effect Work?

Although the process is complex, the greenhouse effect can be described fairly simply:

Sunlight passes through the atmosphere. Clouds, ice caps and other light-colored surfaces reflect some light back into space, but most of the incoming energy reaches the planet’s surface. The Earth radiates heat back toward space. Greenhouse gases in the atmosphere absorb that heat, bouncing some back to the Earth’s surface and releasing some into the atmosphere.

What are Greenhouse Gases?

Greenhouse gases include carbon dioxide, methane, nitrous oxide and other gases that accumulate in the atmosphere and create the heat-reflective layer that keeps the Earth at a livable temperature. These gases form the insulation that keeps the planet warm enough to support life.

Some of the most common — and worrisome — greenhouse gases are:

If the Greenhouse Effect is Natural, Then What’s the Problem with Greenhouse Gases?

Modern climate change is caused by an excess of greenhouse gases. This, in turn, over-insulates the planet. As a result, temperatures rise. Imagine wearing a winter parka in the tropics. The effect is similar — too much insulation causes the planet to overheat, which has already begun to change the climate. Learn more about the impacts of climate change.

Water Vapor Vs Carbon Dioxide: Which ‘Wins’ In Climate Warming?

Marshall Shepherd
Senior Contributor
Science
Jun 20, 2016,11:20am EDT
The fact that water vapor is the dominant absorber in the Earth’s greenhouse effect can lead to a flawed narrative that anthropogenic carbon dioxide (CO2) is not important nor a significant driver of climate warming. I have always felt that narrative is like concluding nitrogen (78% of the atmosphere) is more important to human respiration than oxygen (21%) because it is more abundant. Such oversimplifications can be very misleading.  It is worth laying out the science of whether water vapor or CO2 “wins” in climate warming.

The American Chemical Society’s ACS Climate Science Toolkit cuts right to the chase in an excellent analysis on its website,

The atmosphere is self-limiting in terms of water vapor. If a parcel or volume of air becomes saturated as it is cools, a cloud forms. Professor Adam Sobel of Columbia University provides a nice analogy,

Saying water vapor is a more important greenhouse gas than carbon dioxide is like saying the amplifier in a sound system is more important than the volume dial for producing the sound. It’s true, in a literal sense, but very misleading. CO2 and other long-lived greenhouse gases are the volume dial on the climate, and the water vapor amplifies the warming that they produce.

CO2 and other long-lived greenhouse gases are the volume dial on the climate, and the water vapor amplifies the warming that they produce. 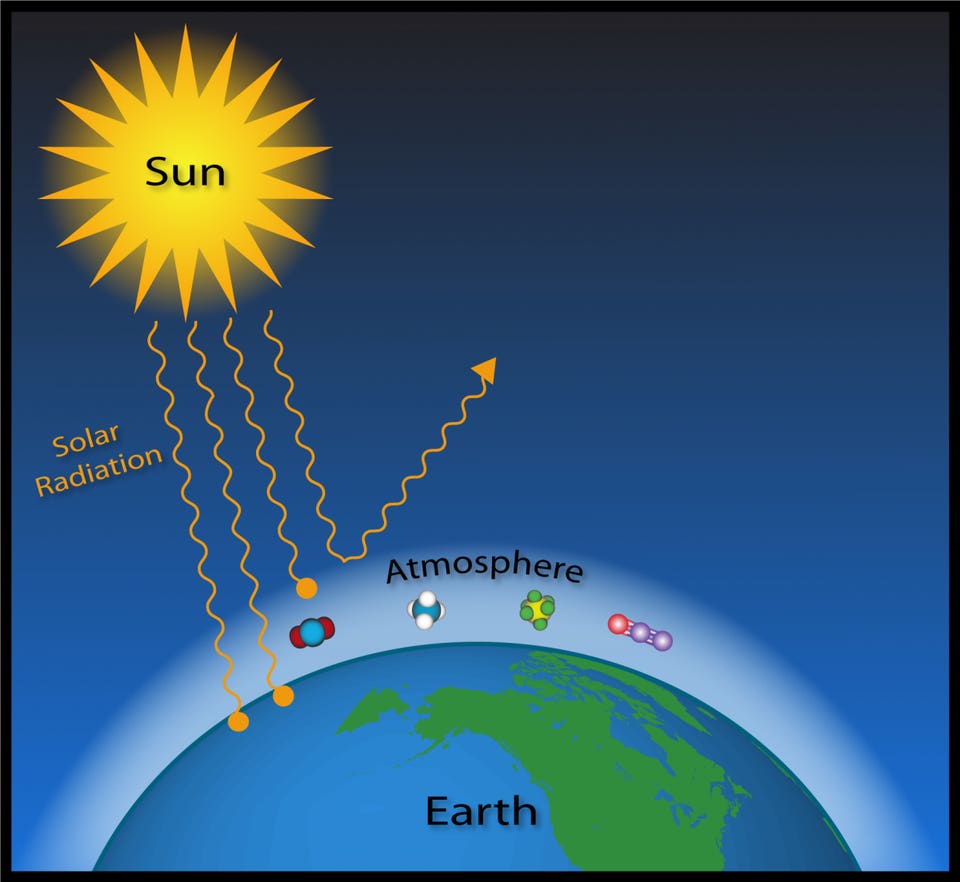 Let’s step back and review the Greenhouse Effect. Ironically, the most abundant gases (nitrogen and oxygen) exhibit virtually no warming affect. A small collection of minor gases representing about 0.43% of the atmospheric constituency allows us to live on Earth.   Greenhouse gases (GHGs) include: water vapor, carbon dioxide, methane, nitrous oxide, and sulfur hexaflouride. If teaching Atmospheric Physics or Radiative Transfer (staples of good meteorology/climate curricula), I would refer to them as selective absorbers. Selective absorbers absorb and emit energy at preferential wavelengths of the electromagnetic spectrum. For example, in the stratosphere, ozone is a selective absorber of ultraviolet (UV) radiation (thank goodness for us). GHGs selectively absorb in the infrared portion of the spectrum. A refresher of blackbody radiation, the foundation of the statement that “good absorbers are good emitters” can be found here. 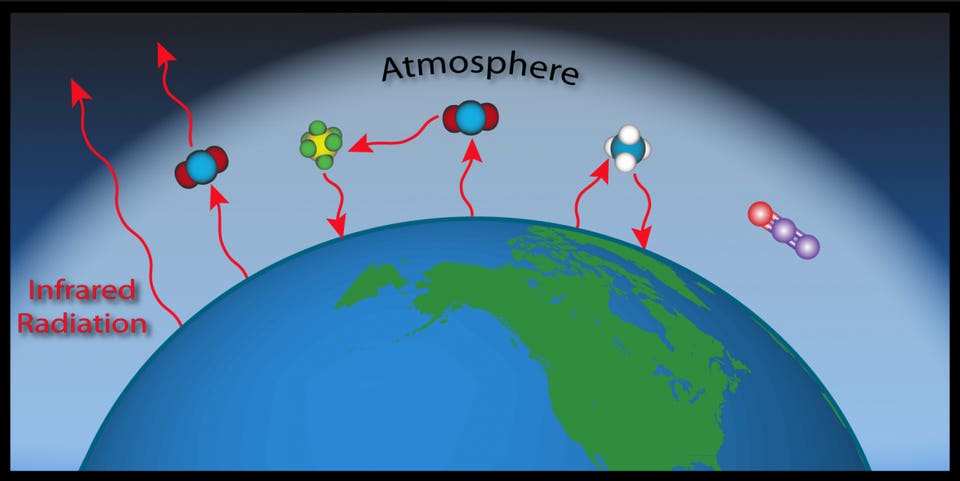 The sun drives the climate system, but I often see its influence misrepresented due to lack of understanding of the complexity of the climate’s radiative system. The sun’s energy is mostly shortwaveradiation (visible and UV). Much of it gets reflected or absorbed by the clouds, atmosphere, or Earth’s surface. The absorbed energy is emitted from the surface as longwave radiation or infrared radiation (heat). Wien’s Law says that objects at different temperatures emit at different wavelengths. The Earth is cooler than the sun so emits at longer wavelengths (i.e., there is an inverse relationship between temperature and maximum wavelength of emission). The longwave radiation from Earth is emitted to space or absorbed by GHGs. GHGs reemit the longwave energy to space, other gases, or back to Earth. The astute reader will note that the atmospheric “greenhouse” effect is really a series of absorption-emission processes rather than just heat entrapment (as a real greenhouse does).

According to NASA, water vapor accounts for about 50+% of the absorption. Carbon dioxide accounts for 20%. Clouds also account for roughly 25%. Atmospheric physics theory dating back to Arrhenius (1895) and Callendar (1938), respectively, have pointed out how relatively small contributions of CO2 can warm the atmosphere. Yet, many mistakenly latch on to the fact that water vapor is dominant and not the aforementioned feedback processes. Dr. Gavin Schmidt writes,

…as temperature rises, the maximum sustainable water vapor concentration increases by about 7% per degree Celsius. Clouds too depend on temperature, pressure, convection and water vapor amounts. So a change in CO2 that affects the greenhouse effect will also change the water vapor and the clouds. Thus, the total greenhouse effect after a change in CO2 needs to account for the consequent changes in the other components as well. If, for instance, CO2 concentrations are doubled, then the absorption would increase by 4 W/m2, but once the water vapor and clouds react, the absorption increases by almost 20 W/m2 — demonstrating that (in the GISS climate model, at least) the “feedbacks” are amplifying the effects of the initial radiative forcing from CO2 alone.

People are often surprised to learn that moist air is less dense than dry air or that deserts can actually get cold at times. Both of these simple assertions are wrong. This article cautions readers that oversimplification is very dangerous.