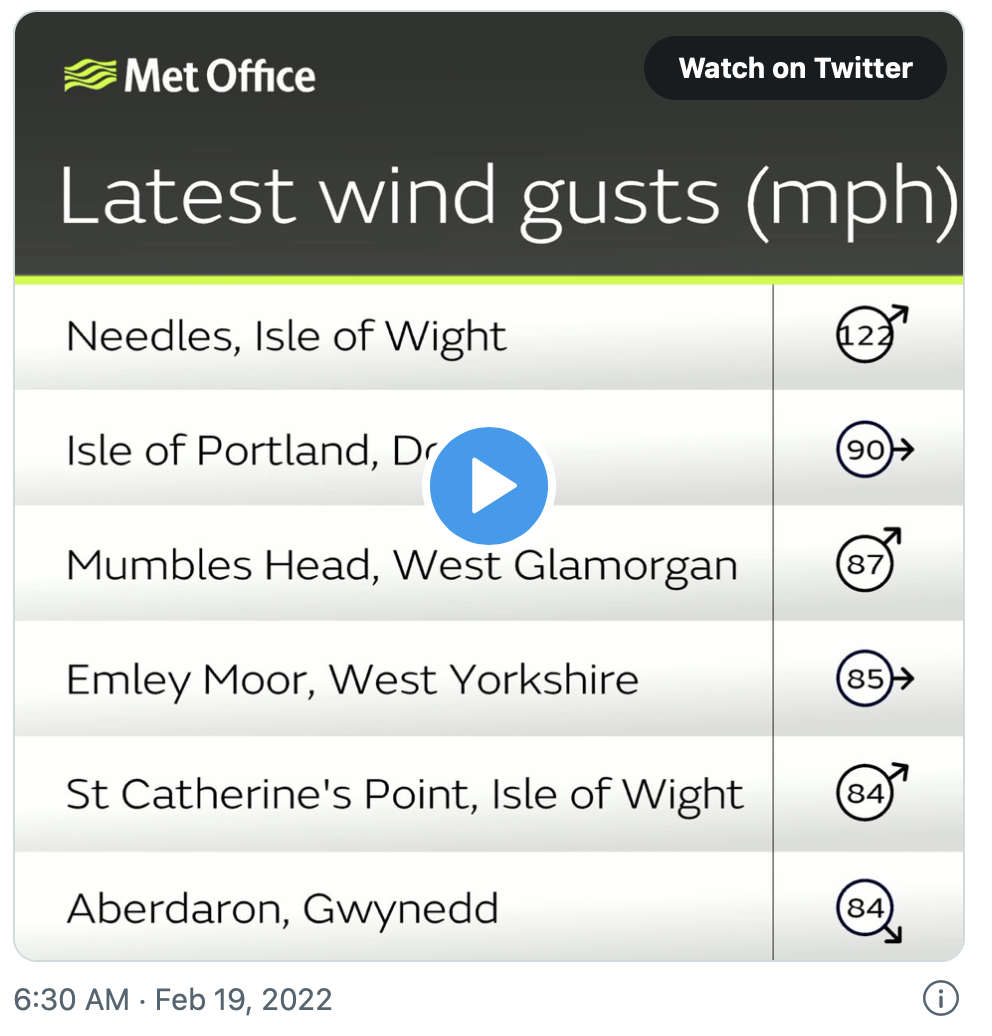 British officials urged millions of residents to “stay at home” as winds reached 122 mph. Thousands tuned into a YouTube channel that let them watch the tippy jets trying to manage gale-force winds at Heathrow.

Storm Eunice landed in the southwest of Ireland in the predawn hours, leaving tens of thousands without power, before barreling across to Britain.

At least nine people died in Europe as a result of falling trees or debris, with two men and a woman in England, a man in Ireland, a Canadian man in Belgium, and four people in the Netherlands dying. The storm knocked out power for tens of thousands of people in Ireland and the United Kingdom.

Authorities warned people that it was going to be severe. The U.K. Met Office weather service issued not one but two rare “red” weather warnings — the highest possible level — for Wales and parts of southern England, including London. It was the first time the British capital had received such a warning since the system was introduced in 2011.

The surprise star of the event, apart from Storm Eunice, turned out to be Jerry Dyer, an aviation enthusiast who broadcasts Big Jet TV on YouTube. His channel quickly went viral, with more than 200,000 people tuning in to watch planes land at Heathrow. Dyer narrated live from the airport, with the camera focused on shaky planes coming in one after another.

Not all of the planes made their landings. Some had multiple misses and had to go around and try again. While the highest gusts were found along the coast in both Ireland and the United Kingdom, Heathrow recorded a 70 mph gust.

Dyer’s footage was, at times, nail-biting, prompting some to question why Heathrow was still open. Others were mesmerized. As the planes came in, Dyer could be heard making comments like, “Oh, no, he’s off center!” and “Qatar’s third attempt folks, here we go!” and “Okay, this guy is coming in sideways.” He showed a little hometown pride when planes from British Airways came in for landing.

It wasn’t all giggles and thrills. According to the U.K. Met Office, the Needles on the Isle of Wight clocked a 122 mph gust, “provisionally the highest gust ever recorded in England.” The Needles are chalk landforms over the English Channel and home to a lighthouse in southernmost England.

In one dramatic scene, the roof of the O2 arena in London was ripped open by the winds. The O2, a major multipurpose venue popular for music concerts, hasn’t commented on its partially missing roof, but in a message on its website, it said that a concert by the Fugees scheduled for Friday evening had been canceled.

This may not have come as a surprise to anyone watching videos postedby one social media user with a view of the arena showing panel after panel tearing away.

Assessing how much damage Eunice has brought will take time. But by early Friday, the storm had caused widespread travel problems. All trains in Wales were suspended. Train operators across the rest of the country warned of disruptions, and several services were operating with a speed limit of 50 mph.

Others on social media shared images and footage of flying objects and falling debris. One user appeared rather surprised when he captured the moment that a giant tree toppled over in the middle of a seaside town. Network Rail, which runs most of the rail system in the United Kingdom, posted several alarming pictures and videos to explain why some trains were canceled, including a video of a building roof being blown onto railway tracks.

The government’s crisis committee, COBRA, met Friday afternoon amid reports that Eunice could be one of the most intense windstorms in decades. London Mayor Sadiq Khan urged people to “stay at home.”

A number of attractions, including the London Eye, a Ferris wheel on the Thames River, and Legoland, a theme park based in Windsor, closed Friday as a precaution. Some zoos and parks also closed.

The destructive gusts were brought on by a phenomenon known as a sting jet which, according to the U.K. Met Office, “is a core of strong winds which sometimes forms in rapidly deepening areas of low pressure and extends toward the ground.”

Strong temperature contrasts help strengthen these jets, and the storm’s power can be traced to the collision of abnormally warm air over Western Europe and frigid air over the North Atlantic.

Climate change may have also played a role in Eunice’s strength. A recent study published in the journal Climate Dynamics concluded that in a warming world, “the frequency of extreme windstorms in Europe is projected to increase” and “a large contribution comes from sting jet storms.”

However, some scientists are not convinced about a strong link between climate change and storms such as Eunice. “Once in a decade storms like Eunice are certain to batter the British Isles in the future, but there is no compelling evidence that they will become more frequent or potent in terms of wind speeds,” said Richard Allan, professor of climate science at the University of Reading.

He added, however, that a moister atmosphere in a warmer climate “could make storms more potent” in a tweet, adding, “More intense rainfall due to the extra moisture and worse coastal flooding due to higher sea levels is more certain effect of #climate change on storms.”

In addition to the high winds, Eunice also brought heavy rain and snow to parts of Ireland and the United Kingdom. Severe flood warnings were issued for waterways in Gloucestershire, England, about 90 miles northwest of London.

Eunice intensified at breakneck speed before it slammed into the British Isles, meeting the meteorological criteria of a “bomb cyclone,” Met Eireann tweeted.

How bad is Storm Eunice – and is it a result of climate breakdown?

Storm Eunice is battering parts of the UK, felling trees and scattering roof tiles as forecasters warn of a “significant threat to life”. But is it caused by climate breakdown, and can we expect an increase in such disruptive storms?

Where has the storm come from?

Eunice brewed in the central Atlantic and was spun up from the Azores towards Europe by the jet stream.

Is it a particularly bad storm?

Yes, gusts of up to 110mph have been recorded at the Needles lighthouse on the Isle of Wight. This has exceeded the prediction of 90mph winds, and is just under the record 120mph winds that hit during the devastating storm of 1987, during which 18 people died in one day.

The Met Office says Eunice has the potential to be the worst storm since then. A rare red alert has been issued by the Met Office, with people asked to stay at home if they can. The government has convened Cobra to discuss response to the likely devastation ahead.

Prof Hannah Cloke, a professor of hydrology at the University of Reading, said: “The Met Office red and amber warnings for high winds should not be taken lightly. Red means you need to act now because there is an imminent danger to life. Everyone who lives or works in those areas should be battening down the hatches, literally in some cases, to prevent people from being killed and injured and to protect your homes and businesses.

“Let us be clear what this means. Winds of 70mph will uproot trees, which can block roads and crush cars or buildings. They can pick up roof tiles and hurl them around. If you are hit by one of those you will be seriously hurt or killed. Wind that strong will sweep people and vehicles off streets, and topple electricity lines. Do not take any chances. Stay inside.”

There is talk of a deadly ‘sting jet’ coming with the storm, but what is that?

Met Office scientists have said one of these can form. Matt Priestley, a research scientist at the University of Exeter, looking at storm tracks and extratropical cyclones, said they were small areas of very intense winds within a storm’s cyclone that were hard to predict.

“They are generally about 10-20km wide and are generated by specific instabilities within the flight lines of storms and cause very high wind speeds.

“They’re not a feature of all storms. They’re often just a feature of the most intense ones like Storm Eunice. The fact that they are such small scale but can have such high wind speeds makes forecasting them very, very difficult.”

Is Eunice linked to climate breakdown?

Michael Dukes, a forecaster at MetDesk, said it could be. He explained: “Although it is hard to pinpoint climate change as a reason for individual severe weather events, climate models do indicate an increase in these type of storms as the earth continues to slowly warm. So this is very much in line with what climate scientists have been warning us about for a number of years now.”

While there is dispute between scientists over whether the storms themselves are likely to increase and become stronger, most agree that the climate crisis will make their impacts worse.

The German climatologist Friederike Otto, who leads the pioneering World Weather Attribution service on whether droughts, big storms or heatwaves were made more likely by the climate emergency, said there was “very little evidence that winds in these winter storms have gotten stronger with climate change”.

She said: “Nevertheless the damages of winter storms have gotten worse because of human-caused climate change for two reasons: one, the rainfall associated with these winter storms has become more intense, and many studies link this clearly to climate change; and two, because of sea-level rise, storm surges are higher and thus more damaging than they would otherwise be.”

Richard Allan, a professor of climate science at the University of Reading, said: “Once-in-a-decade storms like Eunice are certain to batter the British Isles in the future but there is no compelling evidence that they will become more frequent or potent in terms of wind speeds.

“Yet with more intense rainfall and higher sea levels as human-caused climate change continues to heat the planet, flooding from coastal storm surges and prolonged deluges will worsen still further when these rare, explosive storms hit us in a warmer world.”