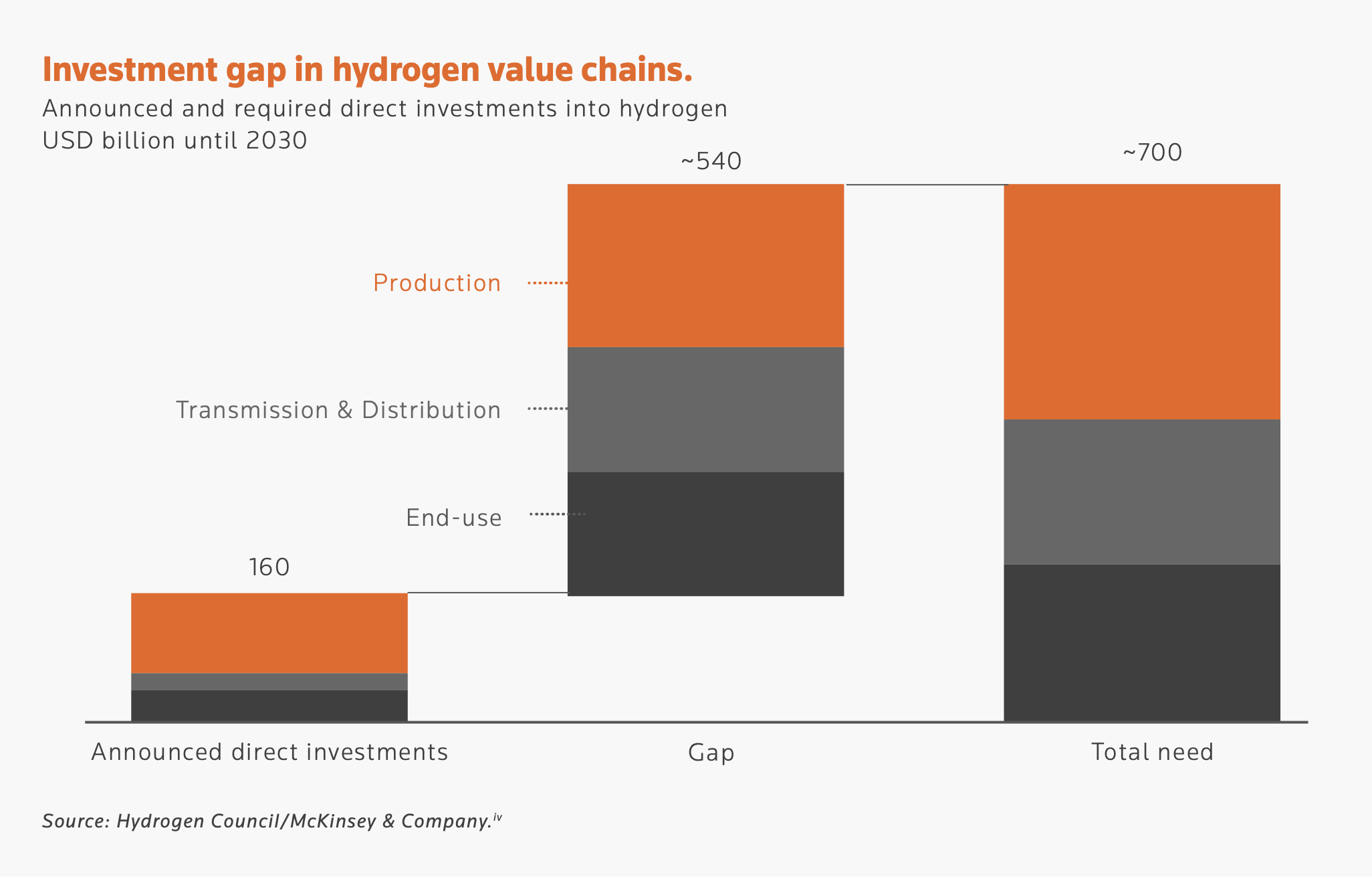 How has COP26 changed the outlook for clean hydrogen?

Keeping global temperatures to within 1.5 Celsius compared to pre-industrial levels will require society to change on many levels, including adoption of lower- carbon fuel sources. Hydrogen, as a clean energy source produced with minimal emissions, is emerging as an enabler for decarbonisation as society races to head off the worst effects of climate change. This paper reviews discussion of hydrogen at COP26 and reflects on next steps as we look towards COP27.

There is a constellation of current and future applications for hydrogen. It can facilitate decarbonisation for hard- to-electrify-or-abate sectors such as steelmaking and shipping and be used in others, such as transport, industry, petrochemicals and more, that cannot cut out fossil fuels using renewable electricity alone. This has led to growing interest in replacing current ‘grey’ supplies of hydrogen, produced using traditional carbon-intensiveprocesses, with low-carbon or clean production pathways.

The two most promising of these are a ‘blue’ version of the gas, where steam methane reforming emissions are captured using carbon capture and storage, or ‘green’ hydrogen, made from the electrolysis of water using renewable energy. Blue and green hydrogen are both more expensive than grey, so achieving net-zero emissions, where no further carbon is added to the atmosphere, will require policy support.

The most important global policy forums relating to climate change are the United Nations (UN) Climate Change Conferences or COPs (for Conference of Parties). Wood, the multinational engineering and consulting business and steering member of industry body the Hydrogen Council, was present at the latest COP talks, COP26, held in Glasgow, Scotland.

Throughout the two weeks, Wood House, the events hub hosted by Wood, saw panels with private and
public stakeholders and investors across sectors such as transport, aviation and industry, covering financing, policy, supply chain, project development and scaling. This paper captures the output from COP26 as it relates to the emerging clean hydrogen sector and reviews the prospects for the industry in the light of the talks.

COP26 and the hydrogen economy

The World Business Council for Sustainable Development and the Sustainable Markets Initiative, for example, announced a venture called H2Zero, featuring 28 companies from sectors including refining, fertilisers and mining. Flor Lucia De la Cruz, senior analyst at Wood Mackenzie, said the announcement was “a positive step” yet “only represents about 4 percent of the current overall hydrogen project pipeline. To achieve a 1.5C scenario, supply-side pledges will need to grow twentyfold.”

The decarbonisation focus brought about by COP26 has helped to further raise awareness of the potential of clean hydrogen and that, in turn, is starting to mobilise investments in and development of supply and demand- side facilities. “It’s not all about talk,” said Daryl Wilson, executive director of the Hydrogen Council, at Wood House. “Things are actually starting to happen, the action is taking place, the projects are starting.”

Like the rise of the natural gas industry over the last 100 years, “This is going to be a whole new energy vector … and bring with it a lot of change that we probably haven’t fully realised yet,” Wilson said.

The need for clean hydrogen activation

One of the few hydrogen-specific actions to come out of the conference was in a plan called the Breakthrough Agenda, launched by UK Prime Minister Boris Johnson
at the beginning of the talks. Backed by more than 40 world leaders, including those of the United States, India and China, the Breakthrough Agenda called to make affordable renewable and low-carbon hydrogen globally available by 2030.i

Further work is now needed to spell out specific steps that can be taken to make this goal a reality. Felicia Jackson, founder of sustainable finance research body Sufinda, wrote in Forbes that the Breakthrough Agenda “is a high-level statement which indicates commitment to an ideal rather than the nitty gritty of how such markets are to be created.”ii

Nevertheless, the announcement made clear that the private sector will need to play a central role in developing the clean hydrogen industry, along with other technology sectors associated with progress to net-zero emissions. This message was reinforced in the discussions taking place at Wood House, which featured experts from industries such as transport and aviation—sectors that cannot move to low-carbon operations without a viable, cost-effective alternatives to fossil fuels.

These industry leaders highlighted the fact that the clean hydrogen industry needs to begin scaling as soon as possible. “The time for trials is over,” says Josh Carmichael, vice president of hydrogen at Wood. “The technology is there. We see significant opportunities across the hydrogen value chain, whether that be making it, moving it or using it.”

Funding is increasingly available—with financiers holding billions of dollars in capital looking to invest in the industry. According to a McKinsey & Company study for the Hydrogen Council, there is already USD$160 billion in funding allocated to hydrogen projects under development.

However, more than four times this amount, or $700 billion, is needed to achieve the level of clean hydrogen that the world will need by 2030.iii Closing this gap is achievable, says the report, but further investmentsin clean hydrogen are hampered by how costly it is compared to both fossil fuels and traditional supplies of the gas.

This creates a challenging chicken-and-egg situation for the industry, since it will be hard for clean hydrogen to scale and cut costs until it becomes more cost effective to produce. Wood, which has a major focus on clean hydrogen, recommends focusing on three areas to kickstart a hydrogen-based energy system:

• Making it, whether through green, blue or alternative production processes.

• Moving it, including the development of appropriate gas networks and carrier fuels involved in transporting the gas.

• Using it, in end-market applications from industrial to residential levels.

Why business should take the lead

Although hydrogen was just one part of a broader energy mix discussed by governments at COP26, the side events in Glasgow did succeed in bringing together a diverse cast of stakeholders to focus specifically on the gas. These kinds of meetings could be the motor that drives the industry forward in future. “Specifically for hydrogen, the allocation of resources around capital and projects needs to come bottom up,” Carmichael says.

Another reason for this approach is that some industrial sectors could find themselves heavily disadvantaged if they do not take the lead on hydrogen today. The clearest example is oil and gas, which at some point will have

to transition away from fossil fuels to reach net-zero emissions by 2050.

At present, oil and gas companies are benefiting from a post-pandemic return to economic growth and a growing aversion to heavily polluting coal plants. An increasing presence of intermittent renewables on the energy grid also favours the consumption of natural gas. However, this is not likely to be a long-term situation. Renewable intermittency is increasingly balanced against ever- cheaper battery storage.

At a more fundamental level, the growing animosity towards coal should be seen as a harbinger for attitudes to fossil fuels in general. “For a long time, coal was untouchable,” observes Carmichael. “Now this move on coal is coming to a venue near you. And next will be gas. Does it make sense to make that investment?”

The future for hydrogen-reliant industries

While oil and gas companies have a clear motivation to move quickly on hydrogen, several other industries have a vested interested in accelerating the transition away from fossil fuels as well. In aviation, for example, “energy density is key to tackling the range problem,” said David Morgan, director of flight operations at easyJet, during a COP26 side event hosted by Wood.

“For smaller vehicles, especially ground vehicles, batteries are ideal—even for small aircraft,” he said. “But we are very, very unlikely to see a commercial-sized narrow- bodied aircraft being powered by battery, so hydrogen is key.”

The industry consensus is that the hydrogen urgency
is there today. Clean hydrogen is seen as a low-carbon precursor for sustainable aviation fuel (SAF). To make SAF a commercial reality will require developments in aircraft design and a significant scaling and lowering of costs in

clean hydrogen production. There is also the requirement for further developments in hydrogen storage, refuelling, distribution and consumption.

He said during the event “There in an opportunity now for industry to collaborate on hydrogen learning and infrastructure, including how to improve the uptake
of SAF and how to see that first innovation point for hydrogen.”Based on the feedback obtained from major industrial partners during the COP26 side events, “this isn’t about the future,” says Carmichael. “It’s about now. The technology, the cost of things and the capital just need to come together for the next phase.”

While clean hydrogen is key to achieving net-zero emissions, it also became clear in Glasgow that the official conference talks are just one part of the push required to drive the development of the industry. Instead, it will be up to the private sector to bring this opportunity to life. Today, the bulk of progress

is thanks to venture capital-funded companies such
as ITM, Nikola Motor and Plug Power. Interest is also building among larger corporations, including oil majors, despite uncertainty over the exact size and scope of the opportunity.

It is important for this process to continue and to accelerate. Compared to other cleantech segments, hydrogen is a safe bet: the industrial sectors that rely on fossil fuels for feedstocks and process heat today cannot readily switch to any other low-carbon option—and cannot be served by electrification.

Furthermore—and this is where COP26 has had a
big impact—there is now no alternative to net-zero emissions. “Everybody now accepts we’re on a journey to net-zero and companies are trying to work out where they fit in to that,” said Stuart Broadley, chief executive of the Energy Industries Council, during a Wood- sponsored COP26 side event.

“There’s a strong alignment in the whole value chain now that we have to now convert the net-zero ambition to action.”

Finally, the importance of getting started on major projects cannot be understated, not just in terms of helping to scale the industry but also as a means of achieving a greater focus from policymakers. “The biggest influence you can have on a minister is to let them see something and preferably touch it or even drive it,” says Carmichael, who formerly worked for the Government of South Australia.

“Getting these big projects away is important because that’s how you are going to get the attention of ministers who will go back to cabinet and make decisions on policy.”

The opportunity to push for a greater presence of hydrogen at the COP agenda will come around next year when national delegations gather again in Egypt. But with COP26 out of the way and all eyes focused on COP27, “the real work happens now,” says Carmichael.