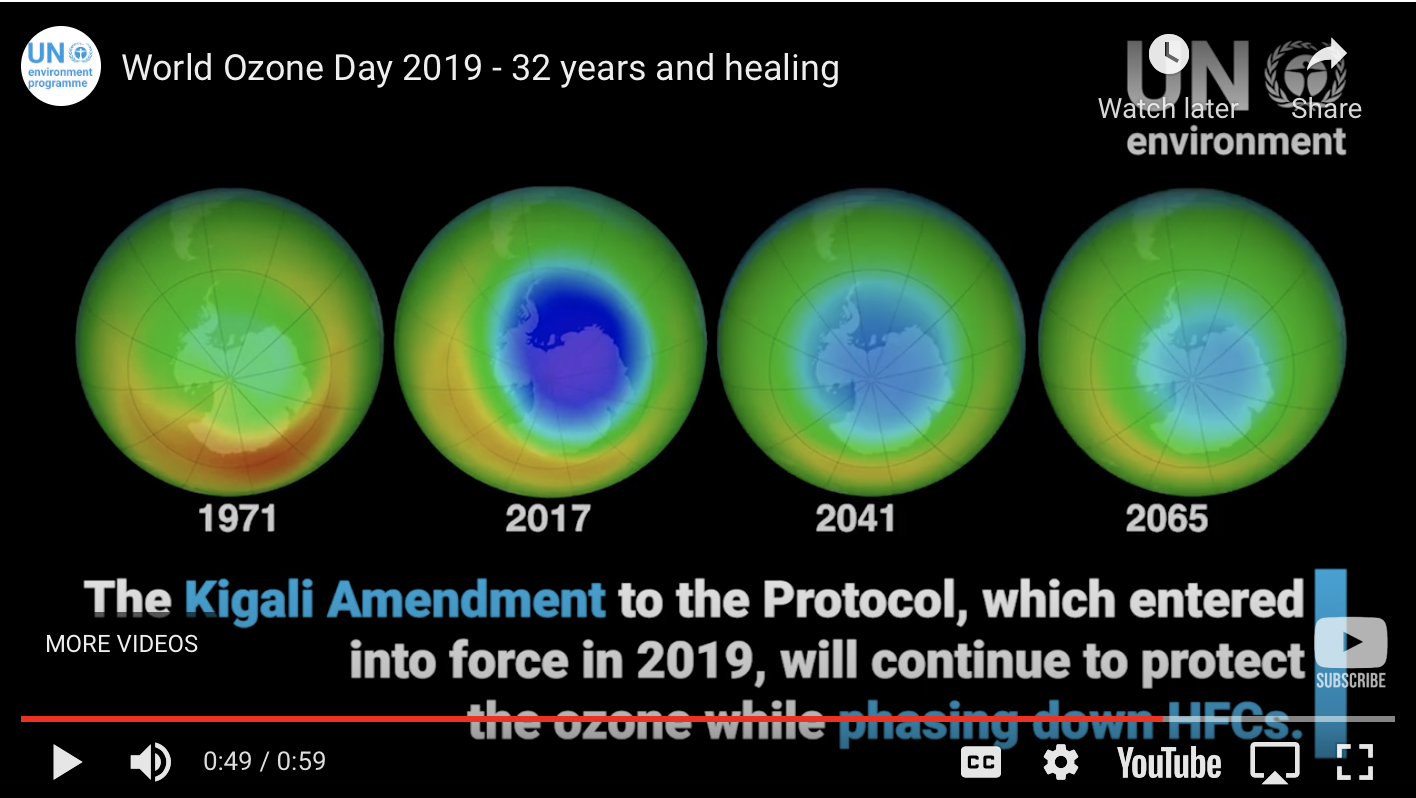 Image NASA: A September 2019 visualization of the ozone layer over the Antarctic pole. The purple and blue colors show areas of most ozone depletion. WATCH 60s VIDEO

As the Montreal Protocol to Protect the Ozone Layer turns 35 on Friday, World Ozone Day, the United Nations has said that continuing the level of cooperation that led to the treaty’s adoption and success is just what is needed to protect life on Earth, end the climate crisis and ensure a brighter future for us all.

Hailing the Montreal Protocol as the most successful environmental treaty ever, the UN Environment Programme (UNEP) said the instrument’s adoption ended one of the biggest threats ever to face humanity as a whole: the depletion of the ozone layer.

“When the world found out that ozone-depleting gases used in aerosols and cooling were creating a hole in the sky, they came together,” the agency said in a press statement, adding: “They showed that multilateralism and effective global cooperation worked, and they phased out these gases. Now the ozone layer is healing, allowing it once again to shield humanity from the sun’s ultraviolet radiation.”

This action has protected millions of people from skin cancer and cataracts over the years since. It allowed vital ecosystems to survive and thrive. It safeguarded life on Earth. And it slowed climate change: if ozone-depleting chemicals had not been banned, we would be looking at a global temperature rise of an additional 2.5°C by the end of this century.

“This would have been a catastrophe,” said UNEP.

In his message on World Ozone Day, UN Secretary-General António Guterres said the Protocol was a success because, when science discovered the threat we all faced, governments and their partners acted.

“The Montreal Protocol is a powerful example of multilateralism in action. With the many problems facing the world – from conflicts to growing poverty, deepening inequality and climate emergency – it is a reminder that we can succeed in working together for the common good,” said the UN chief.

The Protocol has much more to give

Mr. Guterres said that the Montreal Protocol has already contributed to tackling the climate crisis, and indeed, by protecting plants from ultraviolet radiation, allowing them to live and store carbon, it has avoided up to an extra 1 degree Celsius of global warming.

“The Protocol’s work to phase out climate-heating gases and improve energy efficiency through its Kigali Amendment can further slow climate disruption. But, only by mirroring the cooperation and speedy action of the Montreal Protocol elsewhere can we stop the carbon pollution that is dangerously heating our world. We have a choice: collective action or collective suicide,” he warned.

UNEP said that the Montreal Protocol has much more to give. Under the Kigali Amendment nations have committed to phase down hydrofluorocarbons – a move that could avoid up to 0.4°C of global temperature rise by the end of the century. The Protocol and its Amendment are helping the world adopt climate friendly and energy-efficient cooling technology.

What does this mean for humanity? UNEP said that as the international community continues to protect the ozone layer, the Protocol will continue to safeguard us and all life on Earth.

“It also means a cooler planet as more countries ratify the Amendment. It means more people being able to access vital cooling technology without further warming the planet. It also means the Protocol continuing to send a clear and lasting message: global cooperation to protect life on Earth is our best chance at a brighter future for everyone,” concluded UNEP.

/UN News Release. This material from the originating organization/author(s) may be of a point-in-time nature, edited for clarity, style and length. The views and opinions expressed are those of the author(s).View in full here.
———————-
from UN news
16 September 2019
Climate and Environment

At the current momentum, scientists predict the planet’s protective shield of gas – or ozone layer as we know it – will be completely healed as far as some regions of the planet are concerned, by the 2030’s, the UN’s environmental agency (UNEP) revealed on Monday.

The phaseout of controlled uses of ozone-depleting substances has not only helped replenish the protective layer for future generations but is also helping guard human health by filtering harmful rays from reaching Earth, said UNEP shared in a statement.

The recognition of this success comes on World Ozone Day, marked 16 September. This year celebrates “32 Years and Healing”; a commemoration of the international commitment to protect the ozone later and the climate under the historic Montreal Protocol, which has led to the phase-out of 99 per cent of ozone-depleting chemicals in refrigerators, air-conditioners and other consumer products.

Since 2000, parts of the ozone layer have recovered at a rate of 1-3 per cent every ten years, the latest Scientific Assessment of Ozone Depletion estimates. At projected rates the “Northern Hemisphere and mid-latitude ozone will heal completely by the 2030’s”, UNEP said, with the Southern Hemisphere repaired by the 2050’s, and Polar Regions in the following decade.

UN Secretary-General, António Guterres said “we must be careful not to neglect the ozone layer,” as we “rightly focus our energies on tackling climate change”, spotlighting the importance of preventing threats posed by emission of ozone-depleting gases.

Regenerating the ozone has helped curb the effects of climate change – with approximately 135 billion tonnes of carbon dioxide emissions from 1990 to 2010 averted by a strong protective shield.

As of late last year, the World Meteorological Organization (WMO) reported the global concentration of carbon dioxide and other greenhouse gases is still steadily on the rise, with consequential warming effects on the planet and ozone-teardown.

The Montreal Protocol is, to date, the only UN treaty to be adopted by all Member States, with all parties sharing responsibilities relating to phasing out ozone-depleting substances, controlled trade of such substances, annual data reporting and other matters.

“We can celebrate success,” UNEP said, “but we must all push to keep hold of these gains, in particular by remaining vigilant and tackling any illegal sources of ozone-depleting substances as they arise.”

Looking forward, the agency has called for wholehearted support of the Kigali Amendment to the Montreal Protocol, which entered into force on 1 January of this year.

The agreement targets the phasing of hydrofluorocarbons (HFCs), climate-warming gases, which could avoid up to 0.4 degrees Celsius of global temperature rise by end of the century.