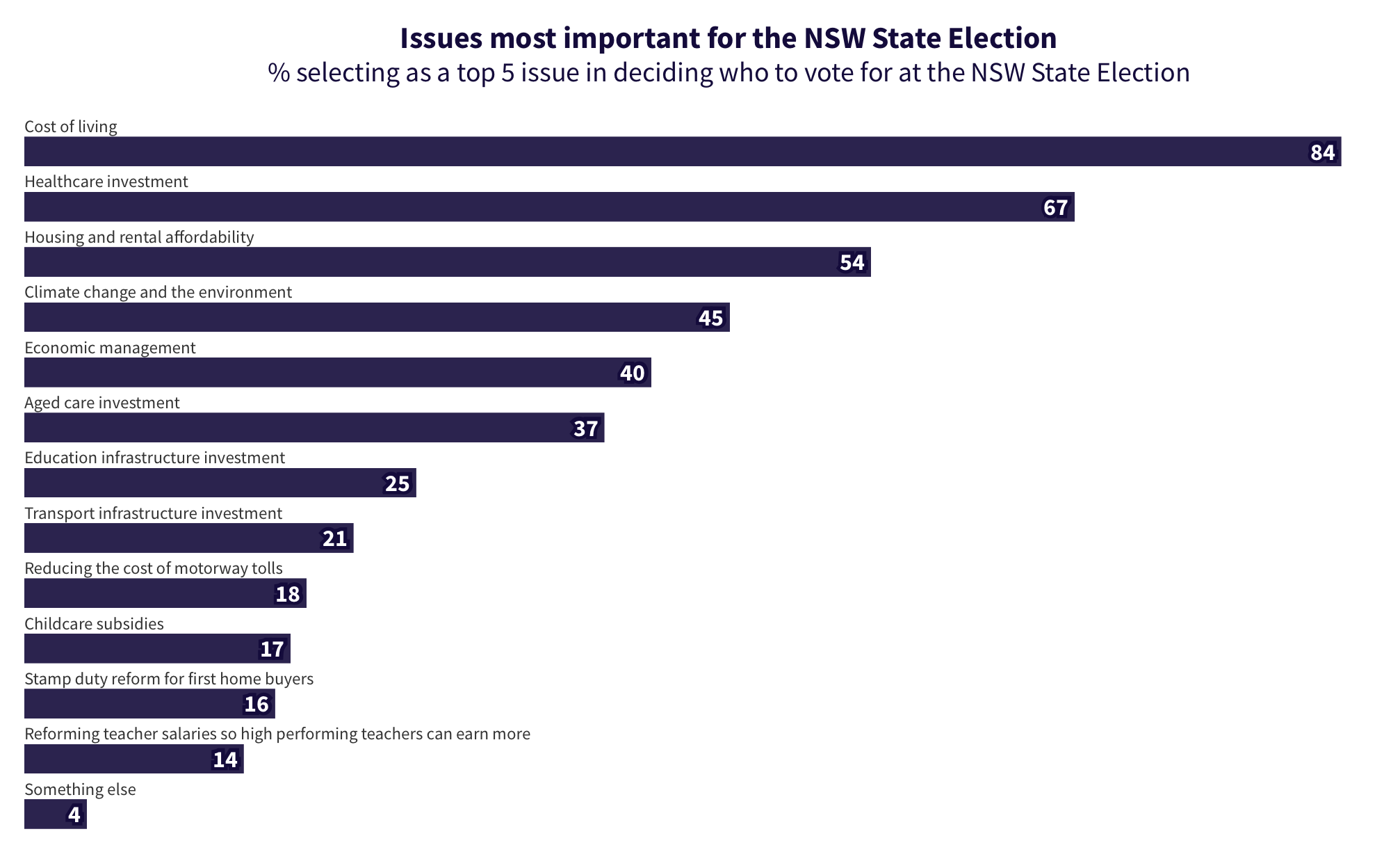 Image: Issues for NSW State Election from Mood of the Nation report.

Cost of living continues to dominate people’s concerns, with 68% now saying addressing it is ‘extremely important to them’. Grocery prices, mortgages, electricity bills and petrol prices are the biggest pain points with insurance premiums a particular concern in NSW.

Our survey of 1,472 Australians, conducted from November 9th to 15th, tested support for a range of potential initiatives that Federal and State governments are grappling with as they seek to respond to growing public demand for action on power prices.

There was also majority support for direct subsidies to reduce energy prices through either windfall taxes on gas companies (59% support this) or funded via new government debt (58% support). Bringing in new supply by fast-tracking new gas projects in Australia also attracted 56% support with only 12% opposed to this while only a minority (36%) want new gas and coal projects to be banned.

Despite the price rises there continues to be strong support for renewables. New results show that Australians typically recognise that the transition to renewables will contribute to higher power bills over the next few years, but that it will be good for electricity prices over the longer term (44% feel it will help keep them down vs 25% who feel it will contribute to price rises). 60% support developing new large-scale offshore wind farms, and 50% support relaxing planning approvals to fast track approvals for renewable projects.

Arguments that direct government intervention in the energy markets could deter investment and put long-term pressure on energy prices held little sway with the community, with only 24% supporting this proposition.

Growing pessimism for the economy in 2023

The short-term economic outlook remains quite negative (57% feel it will get worse in 3 months) and more people now predict that the economy will deteriorate in the next 12 months (51%, up 10 points since September).

42% now feel the Federal Government is doing a good to excellent job, rebounding from 37% in October. However, the response to the Federal Budget was lukewarm, amongst those who knew at least a little about it, with 29% positive, 31% negative, and 40% neutral about the measures announced.

The NSW Government is facing familiar issues to the rest of the nation as it seeks to win re-election next March. Cost of living, healthcare, housing affordability and climate change are the issues of great concern to the community.

On the key issue of healthcare, we found that investment in hospital emergency departments was considered the main priority from a list of six options, followed by investment in more nurses, more GPs and greater hospital bed availability. The NSW Government’s performance rating has edged a little higher but from a relatively low base with its ‘good or better’ rating now at % vs 31% last month. Interestingly, reducing the cost of motorway tolls and stamp duty reforms both ranked quite low in terms of issues for the election.

Despite the economic doom and gloom, it is encouraging to see a slight rebound in the positive emotions people have been feeling in recent weeks. 46% of selected emotions from our balanced list of 32 were positive – this is up from 42% last month and perhaps a response to the warmer weather and approaching holiday season.

Contact us for more information about the full Mood of the Nation research report. This will be the last report for 2022 and our research program will recommence next year.

Geoff Chambers in The Australian