Scott Lindell, Research Specialist, addresses the challenges of feeding the world’s population by 2050. By all accounts, marine aquaculture is one of the best and most sustainable ways to meet that challenge.

Aquaculture is the farming of aquatic animals or plants principally for food. It includes the breeding, rearing, and harvesting of fish, mollusks, crustaceans, and plants in fresh and saltwater environments.

The practice originated in China about 4,000 years ago, and global production continues to be dominated by China and other Asian countries. Aquaculture is used to produce food by some of the poorest communities around the globe as well as by major corporations.

Globally, aquaculture already supplies more than half of all seafood consumed by humans, a proportion that continues to rise as the world population grows. According to the Food and Agricultural Organization (FAO), 3 million tons of food were produced by aquaculture in the 1970s, a figure that rose steadily to over 80 million tons in 2017. Meanwhile, annual global fishing harvests have been flat for 40 years and are not expected to increase in the future (see figure, below). 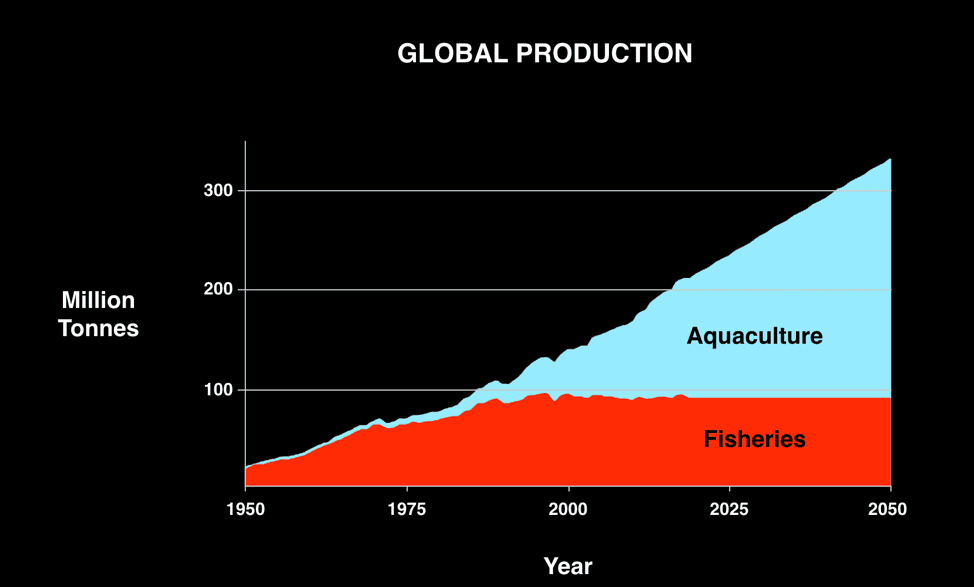 More than 550 aquatic species are farmed. The top fish species include carp, catfish, salmon, and tilapia; commonly farmed shellfish include shrimp, oysters, clams, mussels, and scallops. Newer to marine farming are various species of seaweed, which total 27% of annual global aquaculture tonnage. Aquaculture also includes the production of fish for the aquarium trade and algae for the pharmaceutical, biotechnology (e.g., biofuels), and health industries. It is also used to replenish depleted fish stocks in the wild; the majority of “wild” Alaskan salmon come from hatcheries.

Who are the leaders in aquaculture production?

While the United States is one of the world’s leading consumers of seafood, it only ranks 17th in total aquaculture production according to the FAO. China is firmly at the top of the global aquaculture leaderboard, producing nearly 60% of farmed seafood. Other leaders include Indonesia, India, and Vietnam. 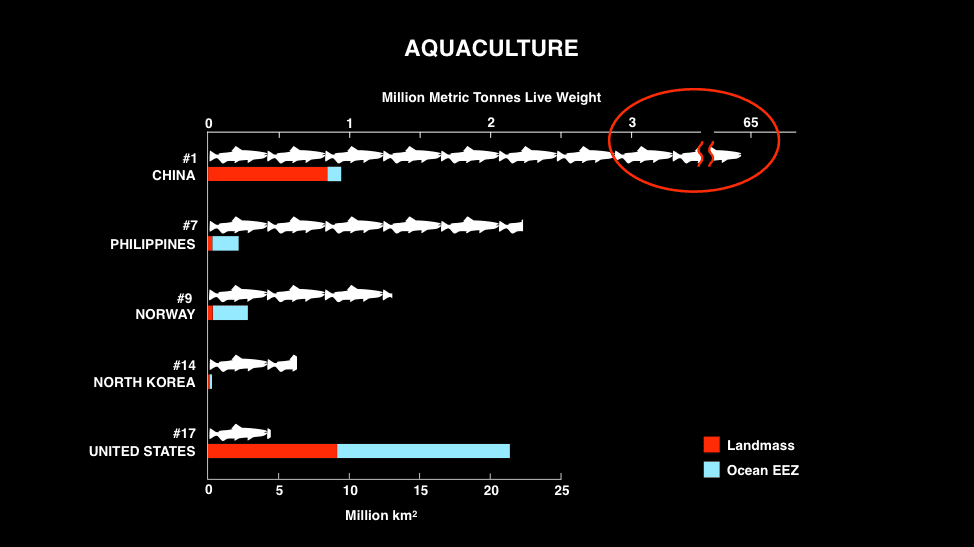 Americans consume nearly 5 billion pounds of seafood annually, and over 85% comes from overseas. As the global demand for seafood continues to rise, the FAO, National Oceanic and Atmospheric Administration (NOAA), and other groups are outlining strategies to boost new U.S. aquaculture production. Some of the challenges in the U.S. thus far include regulatory and policy hurdles (e.g., the need to secure permits to farm in state and federal waters), as well as a reluctance by more established commercial and recreational interests to share the marine environment. 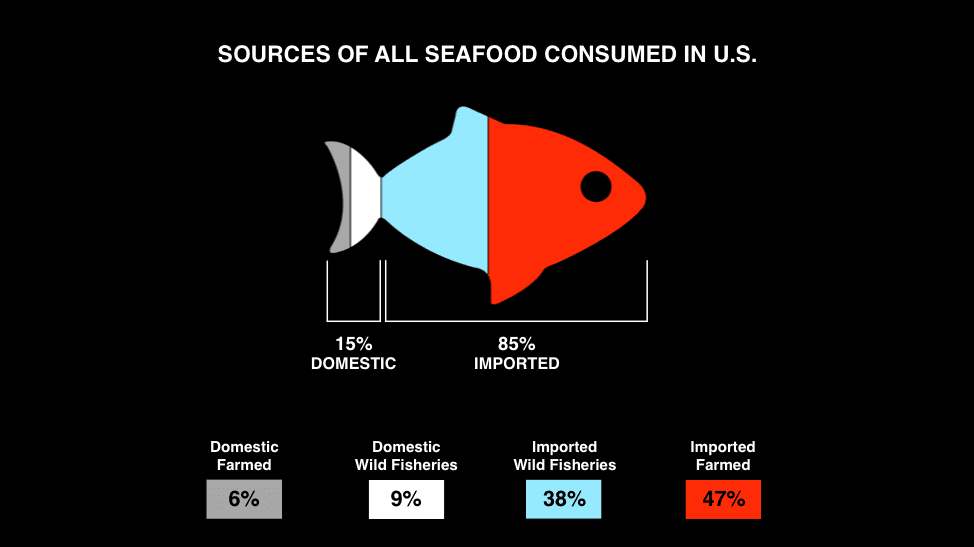 Aquaculture is a major source of seafood for the U.S.

What are the methods used in aquaculture production?

Many different aquaculture production systems are in use around the world, each with its own pros and cons. Commonly used include ocean net pens, coastal or inland ponds, fully-enclosed systems on land, and systems suspended by ropes, floats, and anchors in open water. Production often first involves raising fish, shellfish, and seaweeds in hatcheries (often fully-enclosed), where eggs are hatched and larvae (fish/shellfish) and spores (seaweed) grow to juvenile stages before being transferred to aquaculture systems to grow into adults.

Marine fish such as salmon are often farmed using ocean net pen systems, which allow for the free exchange of water between the farm and the environment. In its brief 50-year history, marine fish farming encountered many early challenges from untested management practices and had to learn to cope with diseases, waste deposition, escapes, and interactions with other marine life. Most of those challenges have been successfully addressed by major investments in technology and modern management methods such as routine fallowing of farm sites, vaccinations, advances in nutrition and feed delivery, and better farm engineering and monitoring.

Tilapia and shrimp are often farmed in semi- or fully-enclosed ponds where water exchange is controlled. Normally, the waste discharged with effluent water is biologically treated before it enters the natural environment. If not properly managed, these pond-based systems have the potential to degrade downstream environments such as sensitive wetlands and mangroves.

More capital and energy-intensive systems that pose fewer risks to the surrounding environment include fully enclosed and recirculating systems that also treat and discharge relatively small volumes of the water to the environment. Fish farmed in this manner include salmon, Arctic char, tilapia, and sea bass.

Suspended or “longline” aquaculture systems—which can be located nearshore or offshore—are used to raise shellfish and seaweeds. Shellfish eat plankton that they filter out of the water, and seaweeds absorb dissolved nutrients—neither needs additional inputs. These systems consist of tensioned and submerged horizontal ropes (held in place by anchors and buoys) from which shellfish or seaweeds are suspended; sometimes shellfish are supported inside trays or mesh bags.

Why is aquaculture important?

Historically, freshwater aquaculture (particularly carp and catfish) has been and continues to be responsible for the majority of global production. Marine aquaculture is playing an increasingly important role for the planet as a food and potential energy source, especially as arable land and freshwater become increasingly scarce. Not only is aquaculture the most rapidly expanding sector of food production, it is one of the most resource-efficient ways to produce protein, according to NOAA. Marine aquaculture has already helped improve nutrition and food security in many parts of the world where wild fish stocks have collapsed. Looking ahead, it could be the answer to a major food sustainability challenge. Scientists at WHOIestimate that, at a minimum, we need to produce 50% more food over the next 30 years to sustain the projected global population. To preserve the natural terrestrial environment we have left, most new food supplies must come from the ocean. Despite covering more than 70% of Earth’s surface, the ocean currently supplies only 2% of our food.

Shellfish and seaweed aquaculture also provide valuable services to marine ecosystems and the planet. Shellfish and seaweeds absorb carbon dioxide rather than producing it like land-based livestock. In fact, dense seaweed farms can create a “halo-effect” around them that could help mitigate local ocean acidification. These forms of low-impact food production mitigate climate change while sustainably feeding future generations. For these reasons, environmental organizations such as the World Wildlife Fund and The Nature Conservancy actively champion shellfish and seaweed farming.

In addition to producing food, marine aquaculture holds great promise to meet the world’s growing energy needs. Demand for energy is increasing by 1-2% per year, driven by a growing population and increasing economic development. About 90% of our energy presently comes from oil and gas, which are finite natural resources and contribute to climate change. Researchers have turned to biofuels—fuels generated by biological processes—as a potentially renewable source of energy that can in principle be carbon-neutral. Biofuels from land-based sources such as corn and sugarcane require arable land, fertilizers from fossil fuels, and scarce fresh water, whereas biofuels from marine algae and seaweeds require only sunlight and abundant seawater.

Given the potential for aquaculture to meet two critical human needs—food and energy—WHOI scientists are working with resource managers and companies to find safe ways to scale up production in the U.S. and globally. Key challenges in basic engineering and biology remain. These include developing selective breeding tools and monitoring tools for large-scale aquaculture systems in ways that have the least impact on ocean ecosystems and people.

What are the impacts of aquaculture on the marine environment?

Whether conducted on land or in water, all farming practices have some impact on the natural environment. As described above, fish and shrimp farming can have negative impacts if not carried out in an ecologically sound and rigorous way. New farming practices of integrating shellfish and seaweed culture with fish farming can reduce impacts and enhance the environment. In fact, shellfish and seaweed farms can improve water quality by taking up excess nitrogen and carbon, and by providing structures in the water column that become nurseries for important fisheries. Here on Cape Cod (and in other regions in the U.S.), oyster farming has greatly expanded in the last decade, and some private and municipal shellfish programs are expanding with the aim of using shellfish production and harvests to mitigate excess nitrogen in estuaries.

How is aquaculture regulated?

Aquaculture regulations vary from country to country. In the U.S., several federal and state agencies are involved in aquaculture regulations, and the permitting process for new facilities can be lengthy and complicated. The primary federal agencies charged with regulating aquaculture include the Food and Drug Administration (FDA), the Department of Agriculture (USDA), the Environmental Protection Agency (EPA), the Army Corps of Engineers (ACOE), and National Oceanic and Atmospheric Administration (NOAA). Each is responsible for a different aspect of aquaculture programs. For example, ACOE works with NOAA to issue permits authorizing aquaculture licenses, whereas EPA regulates wastewater discharge and the use of chemicals in aquaculture facilities. Although existing federal statutes provide a framework for regulation, critics say that state regulations for different kinds of aquaculture vary considerably and that there is no way to ensure that regulations are uniformly enforced. Protection of threatened and endangered species is of special concern when siting and permitting offshore aquaculture farms, even though they currently pose a very low entanglement risk. WHOI scientists are working on strategies to reduce regulatory hurdles to U.S. aquaculture production.

What are scientists doing to advance sustainable aquaculture?

There is a strong incentive to scale up aquaculture production in the U.S. and around the world, and to address the challenges of implementing and maintaining large-scale farms while minimizing negative impacts on the marine environment. 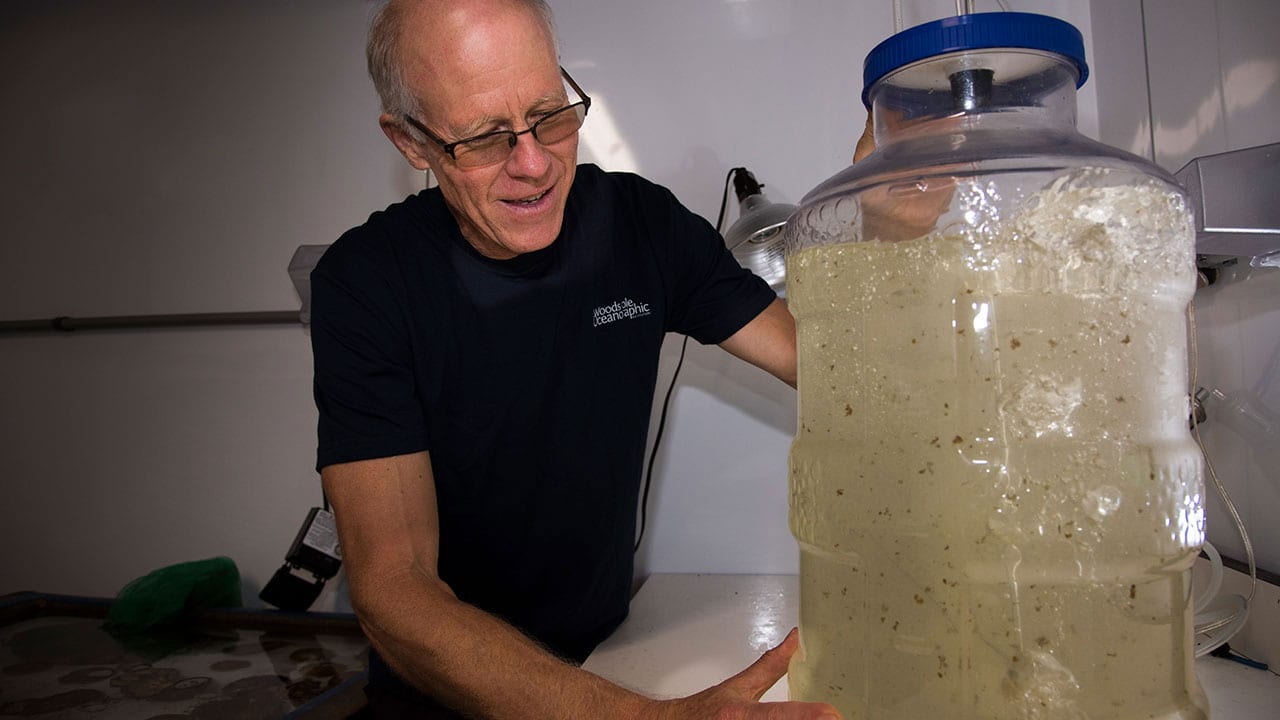 WHOI biologist Scott Lindell examines a container of gametophytes, germinal kelp plants, being prepared for use in a combined aquaculture experiment he is conducting. In six months, the millimeter-long young kelp will grow more than six feet and be ready for harvest. (Photo by Tom Kleindinst, Woods Hole Oceanographic Institution)

For example, scientists are working on ways to mitigate the impacts of climate change on aquaculture farms. They are investigating the best location for future farms as climate change generates new circulation patterns, warms coastal waters, and changes ocean water chemistry. As carbon dioxide accumulates in the atmosphere, the ocean absorbs more carbon dioxide, leading to ocean acidification. Over time, this reduction in seawater pH dissolves the calcium carbonate shells of marine organisms such as oysters, mussels, and clams. WHOI scientists and others are investigating a strategy to mitigate this problem by adding safe and natural chemical buffers to seawater in shellfish hatcheries to reduce the impact of acidification on the most sensitive early life stages.

Another threat to shellfish farms comes from harmful algal blooms (HABs), such as red tides. Occasionally, certain species of marine algae spike in population, forming “blooms” that accumulate in visible patches near the surface of the water. A subset of these may produce toxins that work their way up the food web and are consumed by shellfish. People who inadvertently eat the infected shellfish can suffer severe gastrointestinal impacts such as vomiting and stomach pain, paralysis, amnesia, and even death. Occasionally, blooms can stunt or kill the shellfish. Fortunately, the U.S. has one of the most stringent water quality monitoring, testing, and shellfish food safety systems in the world which prevents accidental harvest and sale of HAB-impacted shellfish. WHOI scientists have developed and tested sophisticated tools that can accurately monitor and predict HABs and inform resource managers in real time.

There are many exciting projects underway at WHOI to scale up aquaculture. Kelp farming has gotten a lot of attention, and WHOI scientistsand collaborators have developed a selective breeding program designed to produce strains that are high-yield and more resilient to a warming ocean. This and other projects aim to develop demonstration farms that could pave the way for low-cost biomass production as a future source of food, animal feed, and eventually biofuel. Another major challenge identified by the research community is the need to routinely monitor aquaculture farms—a difficult task if farms are located offshore. WHOI scientists are developing new robotic vehicles and modifying existing ones in order to develop a system to autonomously sample and monitor offshore aquaculture production.