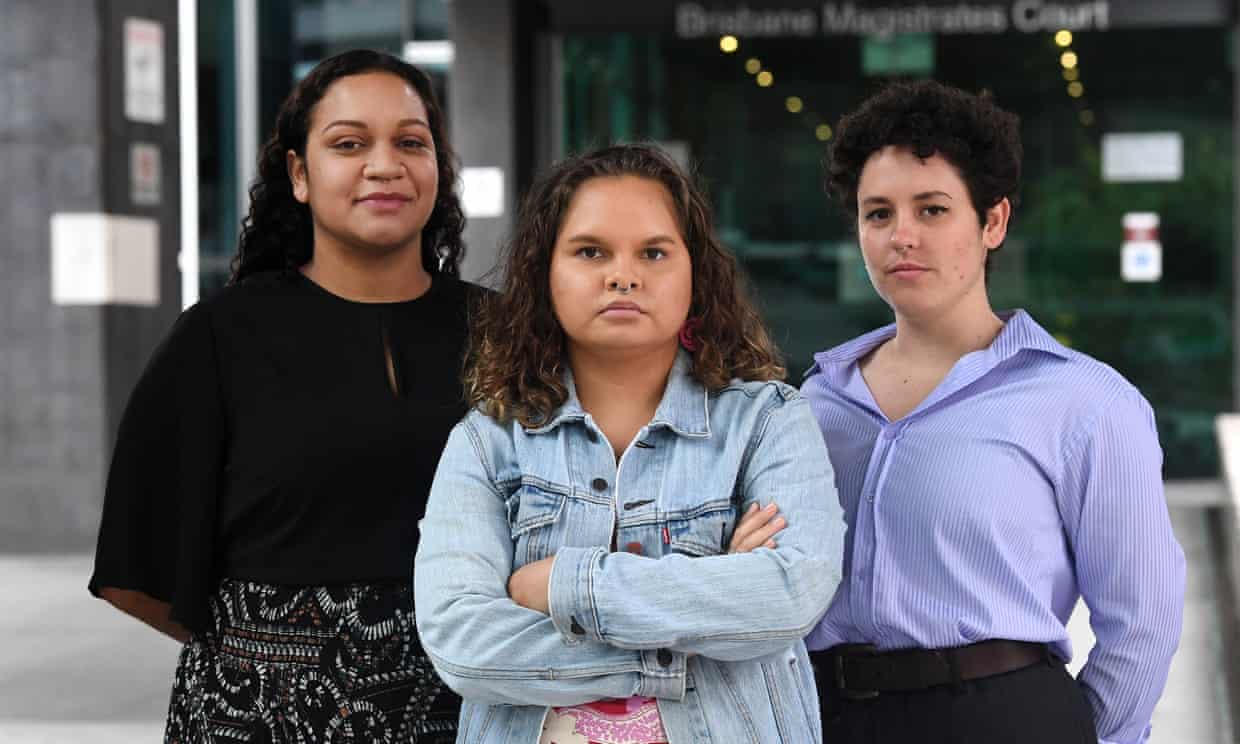 A Queensland court has found Clive Palmer’s proposed Waratah Coal Project should be rejected after a historic legal challenge by Youth Verdict and The Bimblebox Alliance.

President Kingham has ruled Waratah Coal will contribute to climate change which will limit human rights of Queenslanders and First Nations cultural rights.

The mine has been recommended to be refused on all grounds, including First Nations people’s right to culture!

This is the first time an Australian court has heard evidence on-Country against a coal mine and according to First Nations protocols.

Today, President Fleur Kingham of the Queensland Land Court recommended Waratah Coal’s application for a mining lease and environmental approval for the project should be rejected by the Queensland Government.

In delivering her decision, President Kingham recommended the Mining Lease and Environmental Approval should be refused on environmental, climate and human rights grounds.

The President relied on the human rights grounds for both the Bimblebox Nature Refuge, including the property rights of the Bimblebox Refuge landholders, and the cultural rights of First Nations peoples impacted by climate change to make her landmark decision.

“The mine risks unacceptable climate impacts to Queensland people and property,” she said.

The President thanked First Nations witnesses — many of whom travelled to Brisbane for the hearing — for their hospitality and the sharing of their cultural knowledge during on-Country evidence.

“We are overjoyed. The voices of First Nations Queenslanders have been heard. A court has recognised the human and cultural rights of First Nations peoples are impacted by climate change and has recommended that this mine not be approved.

“As a Wirdi woman, I am proud that this case was able to raise the bar for the respect given to First Nations knowledge and customs in the western courtroom. We are excited that we were able to use the Human Rights Act to advocate for changes to Land Court process based on cultural rights grounds.

“All environmental approvals or mining leases should have to consider their impact on First Nations cultural and human rights.

“Billionaire Clive Palmer wants to line his pockets by building a new coal mine in a time when we must move away from extractive industries that destroy Country and fuel climate change.

“First Nations peoples will not stand by while coal-fuelled climate change destroys our Countries and further threatens our connections to culture.

“First Nations peoples must have decision-making power over our Country, our lives and our futures. By continuing to fight for First Nations cultural rights, we’re fighting for a safe and healthy climate for us all.

“We would like to thank our First Nations witnesses, who welcomed the court onto their Countries and told their stories. For some of them, this has been a chance to share with the world their deep knowledge and understanding of Country and its ecosystems and wildlife.

“For others it was a moment to share the pain of the loss of place, of culture that they are already experiencing due to climate impacts like sea-level rise and heatwaves.  We could not be more grateful and humbled by the heartfelt evidence they gave during the on-Country hearings. Thank you.”

In a landmark case, Youth Verdict and The Bimblebox Alliance, represented by Environmental Defenders Office, argued coal from the mine would impact the human rights of First Nations Peoples by contributing to dangerous climate change. They also argue the mine would destroy the Bimblebox Nature Refuge which sits on top of the proposed mine site on Wangan and Jagalingou Country.

In May, the court travelled to Erub (Darnley) Island and Poruma (Coconut) Island in the Torres Strait to hear first-hand how climate change is negatively impacting communities and eroding their ability to practise culture, now legally protected by cultural and human rights under the Queensland Human Rights Act 2019.

This is the first time an Australian court has heard evidence against a coal mine on-Country and according to First Nations protocols. It is also the first time the Land Court has been welcomed to Country as part of a hearing for a mining objection which was accepted because of the Cultural rights.

Full Summary of the Case: http://youthverdict.org.au/waratah

A Queensland court has found the plans of a company owned by Clive Palmer to dig Australia’s largest thermal coalmine in central Queensland infringe upon the human rights of future generations, in landmark climate case.

“This coal is a public resource owned by the state to be exploited, or not, for the public good,” she said on Friday morning.

“Climate change was a key issue in this hearing.”

Kingham said the 1.58 gigatonnes of carbon emissions that would be produced would pose an “unacceptable” risk of climate crisis for Queensland people and property that “had not been fully accounted for”.

The mine would make a significant dent in Australia’s carbon budget under the Paris agreement, Kingham found, and it would infringe upon the human rights of First Nations Queenslanders as well as the owners of a private nature reserve, the Bimblebox, whose ecological value would be “seriously and possibly irreversibly damaged by the mine.

“In relation to climate change, I have found that the following rights of certain groups of people in Queensland would be limited: the right to life, the cultural rights of First Nations peoples, the rights of children, the right to property and to privacy and home, and the right to enjoy human rights equally,” she said.

The verdict was met with cheers from a large crowd – including people who had travelled from the Torres Strait and Cape York – who filled the court and spilled into two overflow rooms.

Kapua Gutchen, who gave evidence in the case when it travelled to his home in the Torres Straits, said he was “very excited” but that the verdict was only a “good start”.

The Darnley Island man said his people were already seeing the impacts of the climate crisis, in declining sea turtle populations, bleached coral and coastal erosion.

“If we don’t get this right now, none of these islands, our low islands, will be left in 50 years time,” Gutchen said.

“That’s our land, and our burial sites.”

Bulgun Warra man Harold Ludwick said it was a “win for the nation”.

“[But] this fight wasn’t just for us, it’s for the children of tomorrow. This is not about black and white, it’s about tomorrow,” he said.

Kingham said her decision was a recommendation, but that the mine’s approval was ultimately a matter for the Queensland resources minister and the environment department.

She described the potential $2.5bn economic benefits of the mine as “considerable”.

But she also said they were “uncertain in a market with declining demand for thermal coal”.

“There is a real prospect the mine will not be viable throughout its projected life and that not all the economic benefits will be realised,” she said.

“Further, the costs of climate change to people in Queensland, to which combustion of coal from the project will contribute, have not been fully accounted for. Nor have the environmental costs of the act of mining on Bimblebox.”

She rejected Waratah’s argument that its mine would make no difference to total emissions, because it would “displace other lower quality coal”.

The case, which began in April, was brought by a group of young people, Youth Verdict, and is led by its First Nations members.

Youth Verdict co-founder and Wirdi woman Murrawah Johnson said the decision meant human rights and First Nations cultural rights would now have to be considered in the approval process for new coal mines in Queensland.

“Coalmines can no longer be put above the human rights of everybody and especially First Nations cultures,” she said.

“Its been a long time coming, frankly it’s overdue, but we are very happy.”

Environmental Defenders Office senior solicitor Alison Rose described the verdict as a “historic win” that would set an “important precedent”.

“Most importantly, the court agreed with our clients that we can’t have a safe climate with this coalmine but we can have one without it,” she said.

“The other thing that is extremely important about this case is that it rightfully centred First Nations lore and took on-country evidence, and that is a historic first.”

As part of the case, the court travelled to the Torres Strait to consider the first-hand impacts of climate change. It is the first time the Queensland Human Rights Act, adopted in 2019, has been considered in relation to the impact of a resources project.

The group argues that the Galilee coal project proposed by Palmer’s company, Waratah Coal, would cause environmental harm by contributing to global climate change, and in the process limit the cultural rights of First Nations Queenslanders to maintain their distinctive relationships with the land, the court heard.

Peter Ambrose QC, acting for Waratah Coal, had said “climate change is real” but argued the coal at the site was “high-energy producing” and would ultimately result in fewer greenhouse gas emissions.

The Galilee Coal project – formerly called China First – has not progressed since it gained federal environmental approval in late 2013. The proposed mine is about 100km from Adani’s Carmichael project and would require much of its own supporting infrastructure.

Sheen Gillman of the Bimblebox Alliance, said Friday’s verdict was a “wonderful win” for “all of nature”.