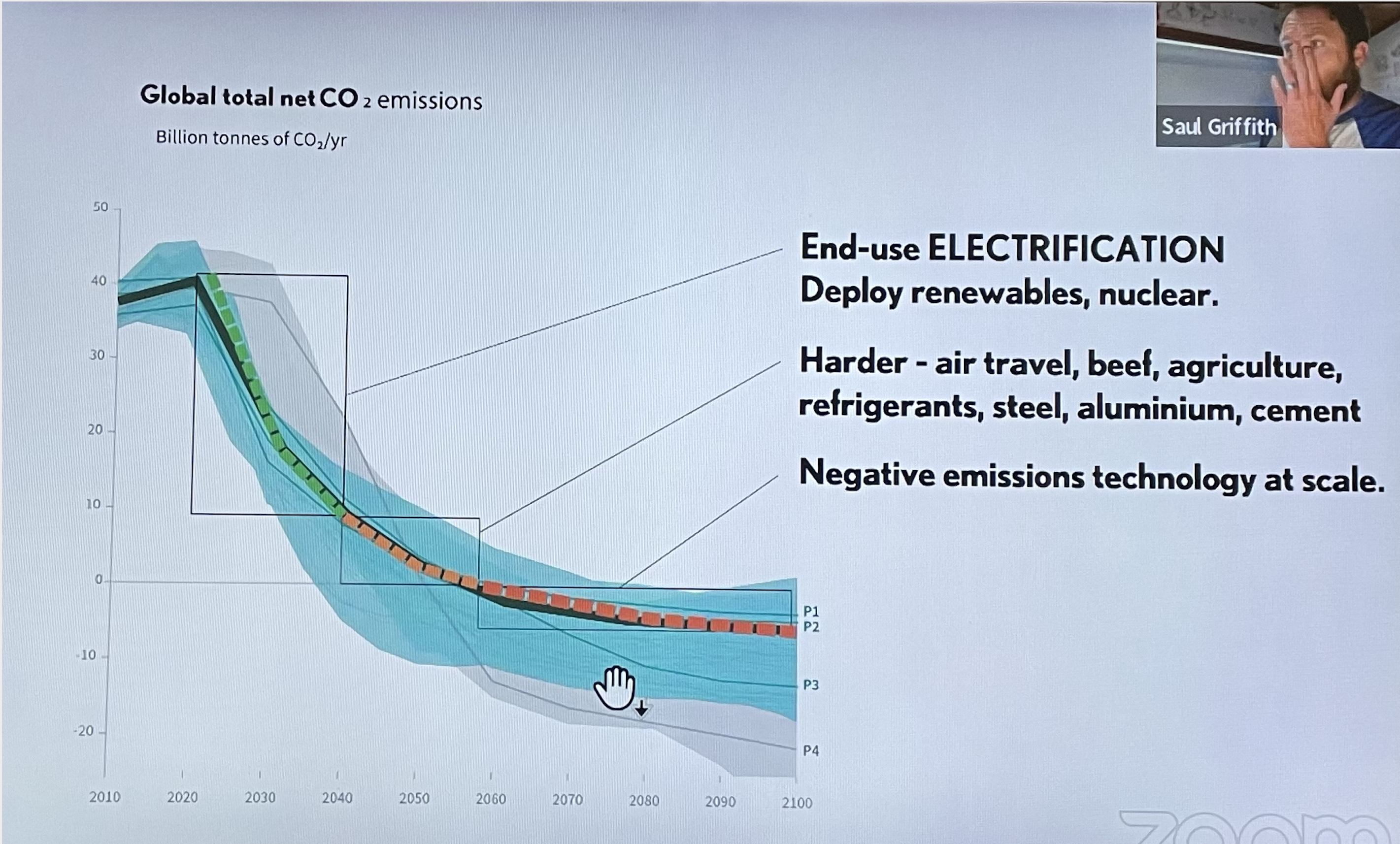 Image: Slide from Saul Griffith presentation: societal tipping points for rapid emissions reductions in the next 15 years are most easily directed to ‘end-use electrification’. This means policy must incentivise the rapid take up of green power, electric vehicles, solar panels and batteries as well as reduction of consumption and waste. Societal readiness can be indicated by monitoring social media.

Tipping points could be identified and triggered to deliver fast action to tackle the climate crisis, according to an analysis led by an academic at Exeter University.

Early subsidies and mass production rapidly crushed costs to leave solar and wind energy as the cheapest power in much of the world and electric cars are now accelerating towards mass adoption, while Greta Thunberg’s solo protest sparked an influential global campaign.

However, researchers have said a further “dramatic acceleration of social change” remains necessary.

Their study examines how small interventions, once triggered, can grow into systemic changes. Rather than focusing directly on cutting emissions, this approach leads to green choices becoming the most attractive. The scientists also said the approach could dispel feelings of helplessness about complex global challenges, stressing that big changes could start in small groups.

The pursuit of tipping points has already been taken up by world leaders representing two-thirds of the world’s economy. More than 40 countries announced at Cop26 in December that they would coordinate investments and align standards to set off tipping points.

Prof Tim Lenton, at the University of Exeter, who led the study, said: “The only way we can get anywhere near our global targets on carbon emissions and biodiversity is through positive tipping points.

“People, whether they’re business leaders, policymakers or whatever, know what needs to change. The question is how? It’s starting to happen, but it’s not going quick enough. The complexity [of the climate and ecological crises] can be paralysing,. I wanted to show that, if you understand the complexity, it can open up windows of opportunity to actually change things.”

The analysis, published in the journal Global Sustainability, analyses the range of preconditions needed for tipping points, for example the plunging cost of LED light bulbs, and how tipping points can be triggered, for example through communication as shown by the change in attitudes to single-use plastic after the television show Blue Planet II.

The study combined theories of critical mass, social contagion, economies of scale, and others, with knowledge of how changes in policy, investment and social attitudes had promoted change. For example, people putting solar panels on their roofs has been shown to grow across communities from small initial groups via social contagion.

Public investment and new policies can be important, such as the carbon price and renewables subsidies that led to coal power being rapidly phased out in the UK, ahead of the government’s target date. Private investment can be powerful too, such as that in solar panels that enable a huge scale-up in production and helped costs fall 90% in a decade.

The researchers also highlight desirability, linking the success of the Toyota Prius to its uptake by influential celebrities in Hollywood. Technological innovation is often involved, and Lenton said the new techniques now being used to produce plant-based alternatives to meat, or culturing meat in reactor vessels, may mean that this sector was approaching a tipping point.

Social change could grow very fast, the researchers said, sometimes starting from an individual such as Thunberg. “These changes often start with small groups of people with a big idea,” Lenton said.

Electric car sales have passed a tipping point in Norway, with 65% of new cars battery powered. The main reason was tax breaks making the purchases attractive, but Lenton pointed out this began with the purchase of an electric Fiat Panda in 1989 by members of the pop band A-ha. They successfully campaigned for the registration tax to be waived, repeatedly refusing to pay road tolls while driving around Oslo with fellow activists from 1990 onwards. The authorities eventually capitulated and the waivers then applied to all electric cars and, as more models became available, sales took off.

However, tipping points are not the norm, Lenton said, so identifying those that could be tipped with a little pressure would be valuable. Physical systems approaching tipping points, such as the north Atlantic Gulf Stream, can be identified by analysing how long it takes to revert to its current normal state. As a system becomes less stable, it takes longer to revert to its initial condition after being disturbed.

Lenton and colleagues are working to see if similar indicators can be seen in social systems. For example, seeing an increase in size and duration of spikes in social media attention for a particular climate solution, for instance electric car adverts, could indicate that the point where a small push could cause a big change is getting closer.

Lenton said further research was needed to identify exactly how to trigger tipping points: “I feel we’ve identified the cooks, and probably a lot of the ingredients, but have not quite got to the point where we’ve got a definitive recipe for how to bake the cake. But hopefully, there’s quite a few recipes available and we’ve made a decent stab at it here.”