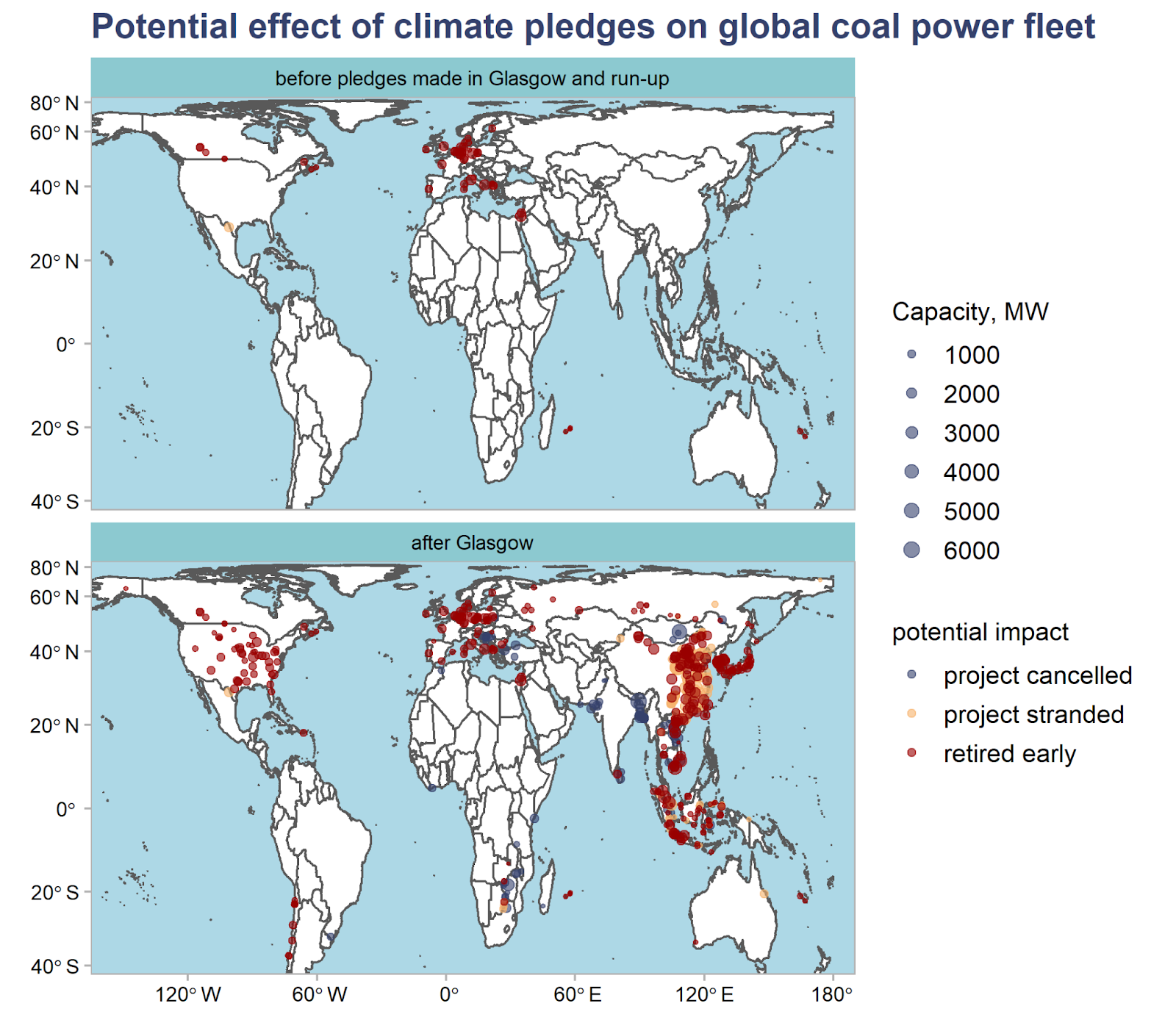 The commitments to “no new coal”, ending fossil fuel financing, coal phase outs and carbon neutrality targets announced in the run-up to and at the UN climate summit in Glasgow are going to have an unprecedented impact on global coal power industry, the world’s largest CO2 emitting sector, according to new CREA analysis.

SHANGHAI, Nov 10 (Reuters) – Asia’s pipeline of proposed coal-fired power plants is expected to shrink from 65 gigawatts to 22 gigawatts following China’s pledge to put an end to the financing of overseas projects, new research showed on Wednesday.

Excluding China and India’s domestic coal power programmes, there are now just 28 new coal-fired plants being planned across Asia, less than 30% of which have secured finance, the Centre for Research on Energy and Clean Air (CREA) and Global Energy Monitor (GEM) think tanks said in a joint report.

The report said nearly all of Bangladesh and Sri Lanka’s planned coal-fired power plants now face cancellation, as well as 65% of Indonesia’s.

However, there are still about 43 GW of projects already under construction throughout Asia, the report estimated.

Chinese President Xi Jinping pledged to end China’s support for new overseas coal power plants during his video address to the United Nations General Assembly in September. The move meant that 99% of global development financing was now committed to the transition to clean energy. read more

According to the Boston University Global Development Policy Center, if all the China-financed overseas coal plants now under construction or being planned were cancelled, 646 million tonnes of annual CO2 emissions could be avoided, more than the total annual footprint of Canada.

China, the world’s biggest producer of greenhouse gases, has promised to switch to lower-carbon forms of energy, but it will only start to cut total coal consumption from 2026.

(Bloomberg) — European carbon futures climbed to a record, following an agreement at the COP26 summit that seeks to reduce the use of fossil fuels and boost nations’ climate targets.

Benchmark prices rose as much as 5.9% to a record 66.97 euros ($76.25) a metric ton on ICE Endex on the first day of trading after the summit in Glasgow, Scotland. Making polluters pay for carbon permits is seen as a key way to cut emissions in Europe, and the European Union plans to extend the bloc’s trading scheme to more sectors.

In the short term, a 6% jump in natural gas prices on Monday — the third consecutive increase — has improved the profitability of burning coal, creating more demand for carbon permits. While gas prices have fallen from record levels last month, they still remain historically high, even before the start of the winter heating season.

The EU carbon price has been relatively flat in recent weeks despite volatile swings in the prices of gas and power.

“That price stability within a more chaotic energy price mix gave a lot of people and some new investors more confidence,” said Casey Dwyer, a portfolio manager at Andurand Capital Management LLP. The focus on carbon trading at the climate talks in Glasgow has also spurred investment in the EU market, he added.