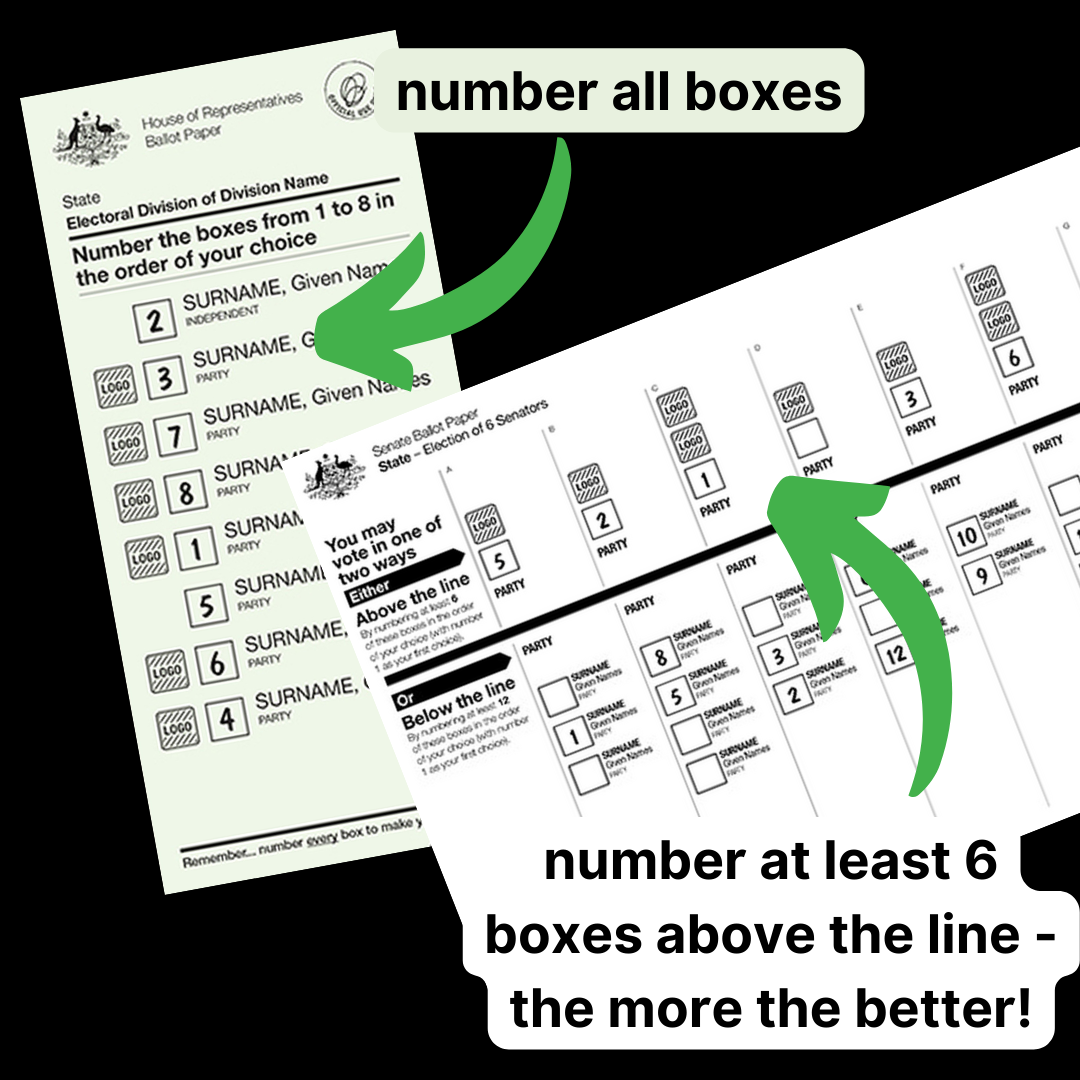 This year’s federal election will be the nation’s first during the COVID-19 pandemic, and it’s already thought things will look very different.
Postal and early voting is set to surge, with people keen to avoid long lines at polling places on election day.

You can apply for a postal vote if you can’t (or dont want to) get to a polling place on election day. IF POSSIBLE ENROL TO POSTAL VOTE BY MAY 18th!

APPLY FOR A POSTAL VOTE

It’s best to vote in person if you can – either way its easy to have voteearthnow.com open at your electorate and state to guide you how to really make your vote count.

Political parties have sent out forms to voters where they can register with the AEC to vote via mail. However, the forms are sent back via the political parties and can be used to harvest personal information about those voters to target later.

This year Labor has set up howtovote.org.au and the Liberals have set up postal.vote – with little party branding – to target voters.

The AEC commissioner, Tom Rogers, wrote to political parties and candidates on Saturday amid reports of incorrect forms being distributed to voters in one division and the AEC’s purple colour being used on forms in another.

“It’s legal but it is potentially misleading and we’re concerned,” Rogers said. “While we haven’t seen unauthorised postal vote applications, the use of colour and wording means someone who doesn’t examine the material in detail could mistake it for a piece of AEC communication.”

Rogers said the election mainly involved people voting in person so there was no need for the mass distribution of postal ballots.

Political parties and members of parliament are exempt from privacy law, meaning voters have no way of knowing what the parties do with any information filled out on the forms.

Guardian Australia has seen one such postal vote application form sent out by Liberal minister and ACT senator Zed Seselja, which includes a reply-paid envelope addressed to the Canberra Liberals.

The postal vote form itself asks for personal information including name, address, email address, phone number and date of birth, but also asks for a security question and answer used to verify a person, such as town of birth, first employer, last school, or name of child.

Independent senator Rex Patrick has called for the exemption in the Privacy Act for political parties to be removed.

“More and more the Liberal and Labor parties are running election campaigns supported by ‘big data’ programs based on access to electoral roll information, harvesting of social media data, highly specific economic and financial information, and through partnerships with contracted polling and analytics agencies,” Patrick said.

“Yet none of this sensitive personal information is protected by Australia’s national privacy standards because, more than two decades ago, the Liberal, National and Labor parties self-interestedly agreed that they would exempt themselves from the data protection rules that apply to other large companies and organisations.”

He said data collection was now on an industrial scale and the volume of data available had grown exponentially in the two decades since the legislation passed.

“This amalgamation and correlation of huge quantities of personal data enables the big parties to precisely direct mail campaigns, political texts and emails at individual voters and households,” he said. “Political spam isn’t random, it’s targeted at you using your own data.

“And given the richness of the available data, it’s no surprise that foreign intelligence agencies and criminal hackers have been keenly interested in the honeypots of personal information held by Australia’s major political parties.”

Patrick said if he was re-elected to the Senate he would introduce a private senator’s bill to amend the Privacy Act to remove the exemption of politicians, political parties and their contractors.

Patrick’s former Centre Alliance colleague Nick Xenophon, who is also contesting a spot in the Senate on the South Australia ballot, also tweeted that if elected he would make amendments to the Electoral Act.

Rogers urged those who needed a postal vote for the 21 May election to contact the AEC directly.

“Political parties send postal vote applications to residents every election but the increased variation of channels and wording this election, combined with the environment, is of concern,” he said.

“Our message couldn’t be clearer – vote in person if you can, apply for a postal vote through us if you need one.”