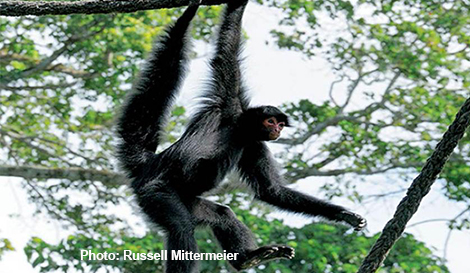 At the start of this new decade, and in the midst of an avalanche of bad news – including the catastrophic mega bushfires in Australia – we can take hope from the fact that nature-based solutions are finally getting more recognition for their important role in the fight against climate change.

We are quickly running out of time on climate change and biodiversity. It is critical that we prioritise the most useful nature-based solutions: protecting the planet’s remaining primary forests and intact forest landscapes.

This is a positive development, but whether it will result in real progress is still unclear. The effectiveness of nature-based solutions varies a lot, and choosing the right solution makes a world of difference. This is especially true in the case of forests. Many of the nature-based solutions to climate change being proposed today simply entail mass tree planting schemes. These initiatives may sound appealing but are in fact costly, largely irrelevant to addressing the climate and biodiversity crises, or worse, counterproductive.

We are quickly running out of time on climate change and biodiversity. It is critical that we prioritise the most useful nature-based solutions: protecting the planet’s remaining primary forests and intact forest landscapes.

Keep the carbon where it is

Nature-based solutions are defined by IUCN as “actions to protect, sustainably manage, and restore natural or modified ecosystems that address societal challenges effectively and adaptively, simultaneously providing human well-being and biodiversity benefits”. To understand which nature-based solutions we should prioritise, we need to think like doctors: our planet is running a fever, so our first directive is to ‘treat the cause, not just the symptoms’. This means doing everything possible to avoid further carbon dioxide emissions and making global warming worse.

The Amazon forest alone stores so much carbon that if it were all released through deforestation, global warming would exceed the 1.5°C threshold, even if we stopped using fossil fuels.

Forests and other ecosystems store vast amounts of carbon. There is more carbon in forest ecosystems – in the living and dead biomass of trees and in soils – than there is currently in the atmosphere, and in fact more than in all known oil and coal reserves combined. The Amazon forest alone stores so much carbon that if it were all released through deforestation, global warming would exceed the 1.5°C threshold, even if we stopped using fossil fuels.

Preventing carbon emissions from degradation and deforestation is therefore as necessary for mitigating climate change as reducing fossil fuel emissions. Given the climate emergency, it is crucial to keep those enormous carbon stocks exactly where they are – safely stored in forests and out of the atmosphere.

But that’s not the whole story

Primary forests – naturally evolved forests that have not been disturbed by industrial activity and retain their native biodiversity – store about 30-50% more carbon than degraded forests, including forests managed for commodity production. Their carbon stocks are also more stable and resilient than those of degraded forests or plantations because their biodiversity and ecosystem integrity make them more resistant to external pressures. Tropical primary forests, for example, are more resistant to fire, drought and invasive species than degraded tropical forests and plantations. This is a crucial point, and too often overlooked in forest policies and programmes. The native biodiversity and unique structure and composition of a primary forest, which has evolved over millennia (or longer), allows primary forests to maximise carbon stocks and keep those carbon stocks safe for the long-term.

Following proforestation, the next restoration objective should be to regenerate forests naturally where they have been cleared. Forests often regenerate most easily next to primary forest patches because even small remnants of primary forests serve a vital function as seed banks, and as habitat for seed dispersers. Focusing restoration efforts around these primary forests remnants is critically important to landscape restoration efforts. In some cases, ecological restoration cannot occur without active intervention because the land is too degraded. But this is expensive, and seed dispersers such as birds or monkeys replant forests better than humans. Allowing the forest to come back on its own is preferable where it is still possible.

On the other hand, tree planting schemes and large-scale plantations should be recognised as the lowest priority for climate mitigation and biodiversity. Seedlings planted today will not accumulate large amounts of carbon in the next decades – that is, the relevant time frame for staying below 1.5°C of warming. A degraded forest recovering from disturbance will drawdown much more. In addition, plantations store far less carbon than natural forests, protect far less biodiversity and are more vulnerable to disturbance, so their carbon stocks are far less secure. Because plantations are harvested on a regular basis, they also regularly release all or part of their carbon into the atmosphere.

This is not to say that plantations can’t be useful: assuming they do not displace local communities, food production or ecological restoration efforts, and their environmental impacts are mitigated, plantations can help meet wood demand and reduce pressure on natural forests. However, they are at best a marginal mitigation strategy.

Primary forests are often the customary homelands of Indigenous Peoples, they are essential to protecting cultural and linguistic diversity, and they are fundamentally important to the livelihoods of local communities. They also provide a wide range of ecosystem services: they protect the most carbon and biodiversity, produce the cleanest freshwater, regulate water flows, have local cooling effects and prevent erosion. And yet they are disappearing very fast. We lose millions of hectares of primary forest every year. We have lost a third of the planet’s forest cover already, and less than a third of what remains is primary forest.

The message is simple. We are facing accelerating and interrelated biodiversity and climate change crises. We cannot resolve either crisis without prioritising the protection of primary forests and engaging in large-scale ecological restoration. This is critical to human well-being, to the diversity of life on Earth, and for a climate-safe future.

We have lost a third of the planet’s forest cover already, and less than a third of what remains is primary forest.

We know how to protect and restore ecosystem integrity: it requires empowering and supporting Indigenous Peoples and communities who are the traditional owners and stewards of these forests, and scaling up protected areas of all governance types, payments for ecosystem services, forest ecosystem connectivity conservation initiatives, and other effective area-based conservation measures. This will in turn require shifting funding from subsidies that fuel forest degradation and destruction to conservation – as well as greatly increasing the two percent of climate funding currently allocated to forests and prioritising it appropriately, to support the highest impact climate mitigation actions: primary forest protection, proforestation and ecological restoration.