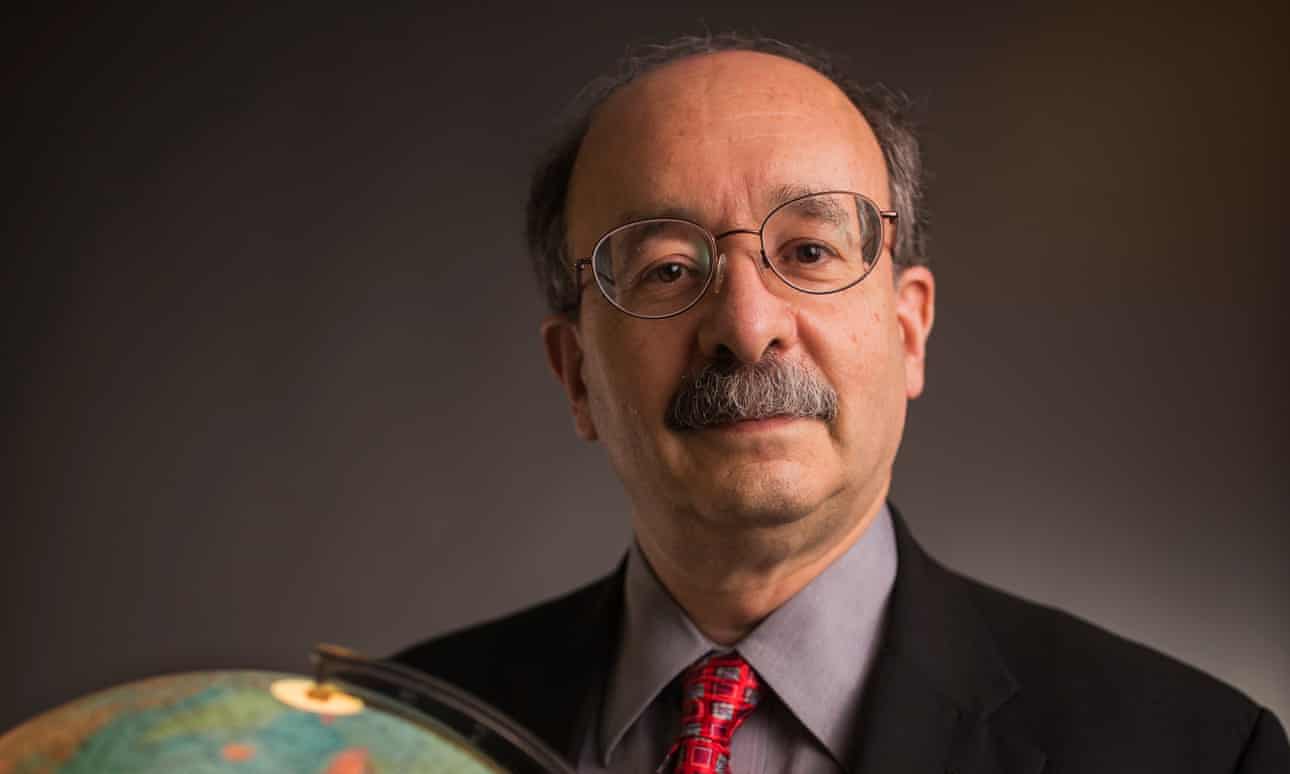 Temperatures dropped far below freezing this week in Snowmass, Colorado. But Amory Lovins, who lives high up in the mountains at 7,200ft above sea level, did not even turn on the heating.

That’s because he has no heating to turn on. His home, a great adobe and glass mountainside eyrie that he designed in the 1980s, collects solar energy and is so well insulated that he grows and harvests bananas and many other tropical fruits there without burning gas, oil or wood.

Nicknamed the “Einstein of energy efficiency”, Lovins, an adjunct professor of civil and environmental engineering at Stanford University, has been one of the world’s leading advocates and innovators of energy conservation for 50 years. He wrote his first paper on climate change while at Oxford in 1968, and in 1976 he offered Jimmy Carter’s government a blueprint for how to triple energy efficiency and get off oil and coal within 40 years. In the years since there is barely a major industry or government that he and his Rocky Mountain Institute have not advised.

But for much of that time efficiency was seen as a bit of an ugly sister, rather dull compared with a massive transition to renewables and other new technologies. Now, he hopes, its time may have come. Lovins is arguing for the mass insulation of buildings alongside a vast acceleration of renewables. “We should crank [them] up with wartime urgency. There should be far more emphasis on efficiency,” he says.

“The energy revolution has happened. Sorry if you missed it”

He sees Vladimir Putin’s war in Ukraine as an outrage, but possibly also a step towards solving the climate crisis and a way to save trillions of dollars. “He has managed to bring about all the outcomes that he most feared, but he may inadvertently have put the energy transition and climate solutions into a higher gear. Whether or not we end up in a recession because of the disruption, [Putin’s war] may prove to be a great thing for climate economics.” As it happens, Lovins has family connections to Ukraine: all four of his grandparents were early 20th-century immigrants from small villages between Kyiv and Odesa. He has one relative left there; the rest, as far as he knows, were murdered in the 1941 massacre of Tarashcha, when a Jewish population of nearly 14,000 was slaughtered by the Nazis, leaving just 11 people who happened to be off in the woods gathering mushrooms that day.

“Solar and wind are now the cheapest bulk power sources in 91% of the world, and the UN’s International Energy Agency (IEA) expects renewables to generate 90% of all new power in the coming years. The energy revolution has happened. Sorry if you missed it,” he says.

But just as with the 1970s oil shocks, the problem today is not where to find energy but how to use it better, he says. The answer is what he calls “integrative, or whole-system, design,” a way to employ orthodox engineering to achieve radically more energy-efficient results by changing the design logic.

Take his house, he says. By designing it to collect energy and to need no heating, it saves 99% of the space- and water-heating energy, and 90% of the electricity. “And it’s cheaper to build and saves construction costs,” he adds.“It turns out that if you make [a] car out of carbon fibre, you also save two-thirds of the investment in water and half the energy space and time needed to put the car together. And it needs a lot fewer batteries because it’s holding less weight because the carbon fibre is light. You pay for the carbon fibre by needing fewer batteries and smaller propulsion system all round.

“So if you do this across the whole economy, really designing whole systems in factories, equipment, buildings, vehicles, you’ll end up with severalfold larger energy savings than practically anyone now thinks is available. And the cost goes down.”

So far, this integrative design approach has been mostly adopted by the private sector. Walmart, the world’s largest truck operator, improved its energy efficiency by nearly 40% by rethinking its operation. Other retail and auto firms such as Tesla and BMW have also seen enormous energy savings. Lovins’ most spectacular early success may have been his 1991 Hypercar concept, an all-electric, carbon-fibre-body vehicle that could do 300 miles to the gallon. It was dismissed at the time but all carmakers are now moving that way.

“Using nuclear power to address shortages of electricity or to counter climate change, he argues, is like offering starving people rice and caviar when it’s far cheaper and easier to give just rice.”

The prize for governments wanting to be truly energy efficient is huge. Lovins and RMI have calculated that at least two-thirds – and probably as much as three-quarters – of all fossil fuel-generated energy could be profitably saved in most industrialised countries, and even more in developing countries because they tend to be less efficient to begin with and can more easily build things right than fix them later.

Germany, Sweden, Denmark, he says, are leading the way for buildings, and Japan for industry. Lovins refers to the American Council for an Energy-Efficient Economy (Aceee), which says intelligent efficiency, smart buildings and smart manufacturingare all coming through. “For speed of improvement, though not absolute level since they started so low, China is the undisputed champion,” says Lovins.

Lovins fears that design has been chopped into little bits and we are losing the bigger energy picture that the Victorians had. In a recent podcast with the UK energy adviser Micheal Liebreich, he explains how savings of 80% and more can be made in the least expected areas. As an example he shows that far less energy is needed to pump heat or cold through fat, straight pipes than skinny, long and crooked ones, because there is less friction.

“In our house we save 97% of the pumping energy by properly laying out some pipes. Well, if everyone in the world did that to their pipes and ducts, you would save about a fifth of the world’s electricity, or half the coal-fired electricity. And you get your money back instantly in new-build or in under a year typically in retrofits in buildings and industry.”

And yet, he says, this sort of energy efficiency is not taught, and it’s certainly not in any government study or climate model. Why not? “Because it’s not a technology. It’s a bloody design,” he says.

The most energy-inefficient design of all, he says, may be nuclear power, which is heavily subsidised, costly and pushed by a politically powerful lobby. Using it to address shortages of electricity or to counter climate change, he argues, is like offering starving people rice and caviar when it’s far cheaper and easier to give just rice.

“When you have a climate and energy emergency, like now, you need to invest judiciously, not indiscriminately, to buy the most efficient solution. Far better to deploy fast, inexpensive and sure technologies like wind or solar than one that is slow to build, speculative and very costly. Anything else makes climate change worse than it needs to be.”

He demolishes the technology with statistics. “In 2020 the world added 0.4 gigawatts more nuclear capacity than it retired, whilst the world added 278 gigawatts of renewables – that’s a 782-fold greater capacity. Renewables swelled supply and displaced carbon as much every 38 hours as nuclear did all year. Where nuclear is cheap, renewables are cheaper still and efficiency is cheaper than that. There is no new type or size or fuel cycle of reactor that will change this. Do the maths. It is game over.”

The future must be in the mass retrofitting of buildings with insulation and heat pumps and what he calls “outsolation”. “You can design out the pipes by putting a sort of tea cosy around houses, like the Dutch Energiesprong exterior retrofit. They can superinsulate your house to net zero standard in a single day whilst you’re at work, and meanwhile they’ve dropped in a very efficient heat pump core for mechanicals, and put on a super-insulated solar roof. And when you get back, you pay them rather than your energy companies.”

Far better and more cost-effective in a historic emergency like this is for governments to invest in efficiency and to remove the many perverse subsidies and obstacles to people and businesses buying energy efficiency. It needs creative thinking, too. Why pay architects and engineers for what they spend, not what they save? Why reward energy companies for selling more energy, not cutting bills? Why not use the tax system to speed the uptake of renewables?

Lovins, now the chair of RMI, teaches at Stanford while his colleagues help redesign the cement and forestry industries, as well as farming, retail and aviation sectors. He is hopeful that shorthaul and even medium-haul planes will soon be electrified and made energy-efficient by using new ultralight frames, structures, surfaces and fuel.

Only half jokingly he urges a mass movement to knit millions of cheery yellow and blue woolly hats. That, and people turning down their thermostats by two or three degrees would save billions of cubic metres of gas.

“Putin’s war is being financed by those who buy Russian fossil fuels.”

“Putin’s war is being financed by those who buy Russian fossil fuels. In the first two weeks the west has paid €8bn to Russia. We have a new energy crisis, and efficiency is the largest, cheapest, safest, cleanest and fastest way to address it,” he says.