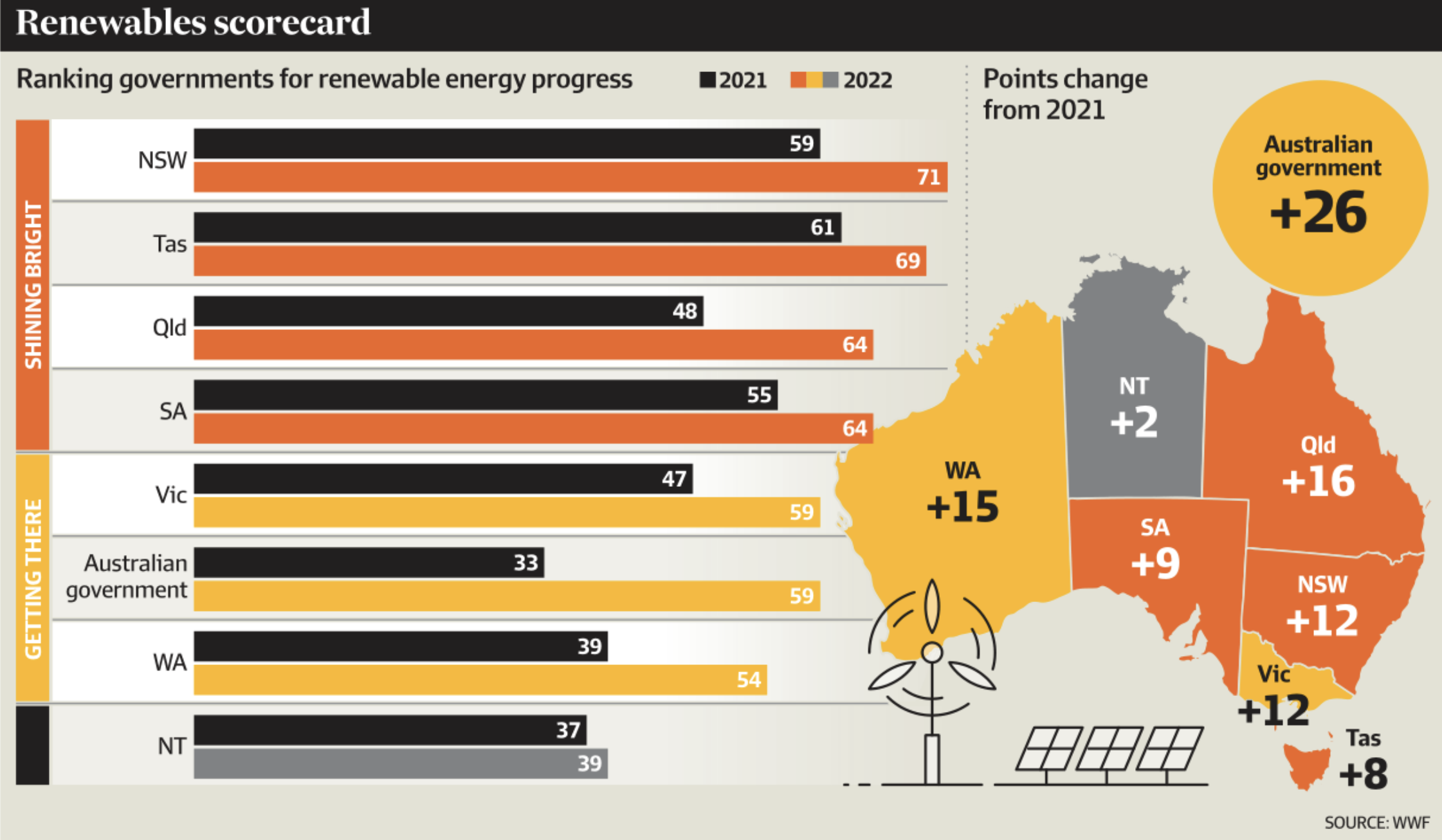 Image: WWF, from The Australian

Key points about the Scorecard:

5 December 2022, SYDNEY – New South Wales has surged to first place in Australia’s race to becoming a renewable energy superpower, while the Australian Government made the greatest progress of all jurisdictions (+26 points) following a raft of policy and budget commitments since the 2022 election, according to WWF-Australia’s third Renewable Superpower Scorecard.

“It has been a dynamic 12 months for all Australia’s state and federal governments in the race to renewables,” said Dermot O’Gorman, Chief Executive Officer, WWF-Australia.

“Almost daily we are seeing new records for renewable power generation across the nation and increasing investments in renewable energy generation and infrastructure as Australia and the world transition to renewables as the lowest cost energy for the future.

“As the latest Renewables Superpower Scorecard shows, more and more governments are stepping up in what is now a global race to decarbonise economies and capture the renewable energy opportunity,” O’Gorman said.

The Scorecard – which provides an analysis of the progress of federal, state and territory governments in becoming a world leading renewable energy superpower – showed that there is substantial policy progress to celebrate in the latest edition.

New South Wales secured top spot for the first time thanks to a range of new policy commitments, including expediting transmission and energy storage projects and the release of First Nations guidelines for major energy projects, which aims to ensure the benefits of the transition are felt across First Nations communities.

Tasmania came in second place continuing to build on its renewable energy strengths with investments enabling hydrogen and renewable fuels, and commitment to develop sectoral decarbonisation plans to support its legislated net zero target of 2030.

Queensland’s Renewable Energy Target to reach 70% renewables by 2032 and 80% by 2035 helped it join the podium for the first time with a 16-point increase.

Around the country, we’ve seen a raft of commitments that has seen major progress among our state and territorial governments.

Victoria’s Australian-first announcement of an offshore wind target of at least 9 gigawatts by 2040 helped it gain 12 points in the Scorecard, while South Australia benefited from its Hydrogen Jobs Plan, which includes plans to build one of the world’s largest hydrogen electrolyser facilities. Western Australia and Northern Territory also gained ground.

However, this is just the beginning and there is still much to do.

According to the Clean Energy Investor Group (CEIG), policy vision and stability are critical to reducing barriers and creating more investable markets.

“We welcome WWF-Australia’s Renewable Superpower Scorecard and are pleased to see ambitious plans for storage, transmission and renewable energy zones, which provide a good foundation for export-orientated growth.”

While the speed and scale of these policies will be crucial, they must also embrace the principles that achieve equity among our people and maintain a healthy planet.

“The Australian Government announcing its ambition to host COP31 in 2026, in partnership with Pacific nations is truly an Olympic moment. Having the opportunity to host a nation-building global conference gives Australia the chance to catalyse climate action around the world and revive our global reputation,” said O’Gorman.

“Australia is perfectly placed to redefine our role in the world – to become a renewables exports superpower and a true global leader on climate solutions – but we must do it right.

“We need to transform our economy from a linear industrial machine to one that is circular, regenerative and purpose-driven, working across supply chains and with our people to find opportunities to truly regenerate nature and our communities.

“Australia has the knowledge, technology and connectivity to design and drive this revolution, with renewables at the forefront. To fully harness the huge opportunity we have, we must leverage our current momentum, demonstrate smart and ambitious policy, and drive progress, implementing solutions at speed and scale with communities and nature at the core.”

About the Renewable Superpower Scorecard:

The Renewable Superpower Scorecard presents a snapshot of how Australia’s state, territory and federal governments are performing in the race to become a renewable superpower.

The scorecard comprises 11 categories, covering the major building blocks needed to make Australia a renewable export superpower. Each category contains one to four indicators (22 in total) against which the governments are scored. Each indicator is worth five points, making the maximum possible score 110 points.

For many of the scorecard categories, the Australian Capital Territory (ACT) cannot be subject to the same measures as other states and territories due to its unique situation as Australia’s smallest, and only landlocked, jurisdiction. For this reason, the ACT has only been assessed on selected categories, and thus is not ranked against other jurisdictions in the national Superpower Scorecard.

The Renewable Superpower Scorecard has been released as part of a campaign to make Australia the world’s leading exporter of renewable energy by 2030. The campaign is part of WWF-Australia’s Regenerate Australia program to restore wildlife and habitats after the 2019-20 bushfires and future-proof Australia against further climate disasters.