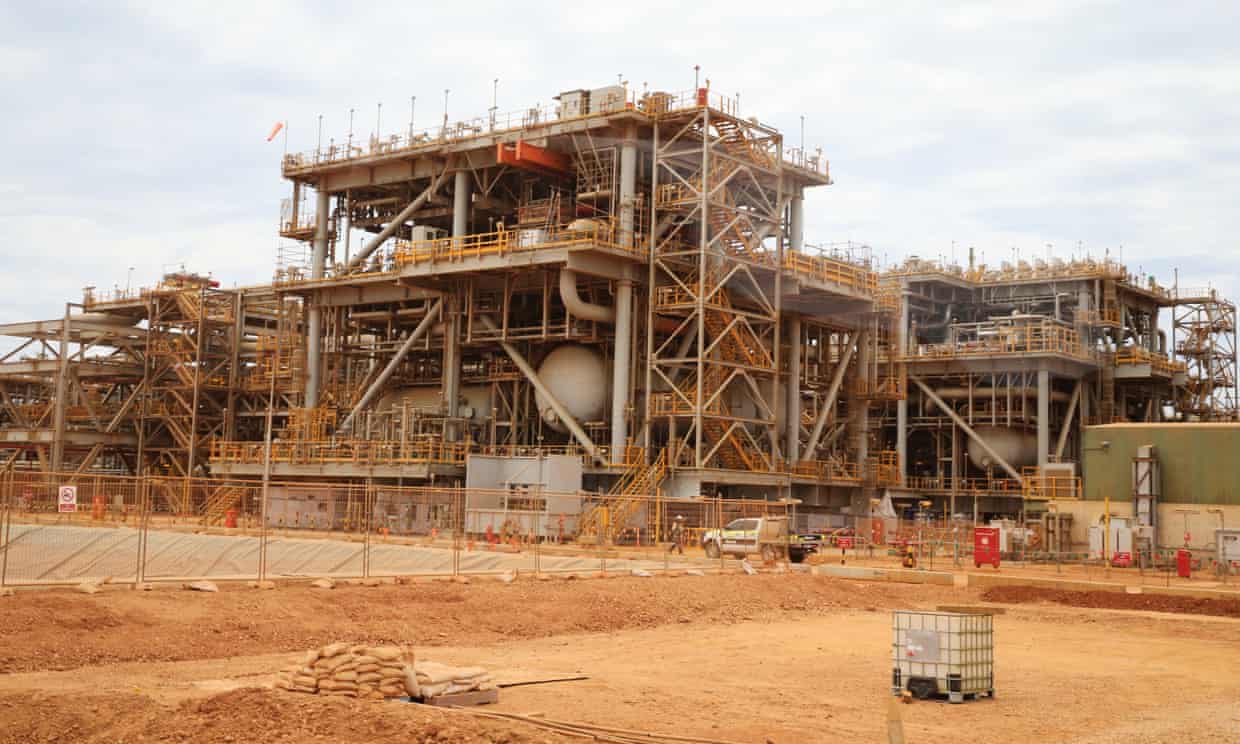 Chevron’s Gorgon project is the biggest polluting facility under the safeguard mechanism, a study by the Australian Conservation Foundation found. Photograph: Ray Strange/AAP

Greenhouse gas emissions from gas and oil extraction in Australia rose 20% in the five years after the 2016 introduction of the safeguard mechanism, a policy supposed to stop increases.

The scale of the emissions growth, revealed in a new analysis by the Australian Conservation Foundation (ACF), has prompted a warning that the Albanese government will struggle to cut industrial emissions if its planned revamp of the mechanism continues to allow new coal and gas developments.

The analysis found 10 companies had been responsible for more than half of all industrial emissions covered by the safeguard since it was introduced by the Coalition with a promise it would stop increases.

The biggest single polluting site was found to be Chevron’s Gorgon liquefied natural gas (LNG) development in northern Western Australia. It was approved on the condition it capture and bury some of its emissions via what has been described as the world’s largest carbon capture and storage (CCS) project. The CCS project was repeatedly delayed before becoming operational, and has missed emissions targets set by the WA government.

The ACF said its analysis underlined the need to transform the safeguard mechanism to start to cut pollution. It found the 215 major polluting facilities covered by the scheme were responsible for 28% of Australia’s carbon pollution. Their combined annual emissions had increased 7% – 9m tonnes a year – since the safeguard began, largely due to the expansion of LNG exports.

Labor has promised to address this by reforming the safeguard to gradually reduce industrial pollution to help reach its 2030 target (a 43% total cut below 2005 levels) and hit “net zero” emissions by 2050.

Under the safeguard, the big polluting sites are each set an emissions baseline, or limit. Companies that breach that limit are supposed to pay for their excess emissions.

In practice, they have often just been allowed to increase their limit without penalty, prompting claims from climate campaigners and industry leaders that the scheme was pointless unless properly used. The Business Council of Australia is among those to have called for it to be overhauled to reduce emissions by lowering baselines.

An options paper released by Labor last month included suggestions that could effectively turn the safeguard into a carbon trading scheme by resetting emissions baselines and giving free credits to polluters that stay below their limit. Those credits could be sold to companies that emit more than their baseline and need to offset the additional pollution.

The ACF’s lead investigator, Annica Schoo, said the scheme to date had been an “abject failure”, and Labor’s changes could “go wrong” if big polluters were allowed to set the rules as they had been under the Coalition.

“These are all big, publicly listed companies that have done more than their share of climate damage. It’s time for them to, at the very least, do their fair share to clean up their mess,” she said.

She said emissions from coalmining had increased slightly over the five years, but those from gas and oil extraction had ballooned by 20%, primarily due to the opening of new developments.

Planned big gas projects, including Woodside’s Scarborough development in northern Western Australia, Santos’s Narrabri gas field in New South Wales and the proposed opening of the Beetaloo Basin in the Northern Territory, “will blow out the safeguard even further”, Schoo said.

The role played by the biggest emitters

The 10 biggest emitting companies under the safeguard were responsible for 362m tonnes of carbon dioxide under the first five years of the scheme. This was 53% of all emissions covered by the policy.

A further breakdown reveals nearly a third of the pollution released under the safeguard – 218m tonnes across five years – came from just 10 sites.

The biggest contributors were both LNG developments: Chevron’s Gorgon gas export facility and Woodside’s North West Shelf project. They were followed by BlueScope Steel’s Port Kembla steelworks, the early stages of the Ichthys LNG project in the Northern Territory and Qantas Airways.

Schoo said the safeguard mechanism could achieve credible emissions cuts, but needed “serious surgery”, including tightening limits for the 10 companies that made up most of the emissions. Labor’s decisions on the design of the scheme would “make or break” Australia’s 2030 target, she said.

“A predictable phase down [of baselines] would give industry incentives to come up with innovative energy-saving solutions to run their businesses more cleanly and efficiently,” she said.

The analysis found several major emitters were trying to expand operations, a change that could add about 12m tonnes a year. In its submissions to the government, the ACF said any new or expanding facility entering the scheme should have to be carbon-neutral.

A spokesperson for the climate change minister, Chris Bowen, earlier this week said an extensive consultation process on the design of the safeguard was still under way.

“We know industry and stakeholders will have a wide range of views on these reforms, which is why the Albanese government is going through this genuine consultation process,” the said.

“The government will consider these views on their merit before making any decisions on the final design.”