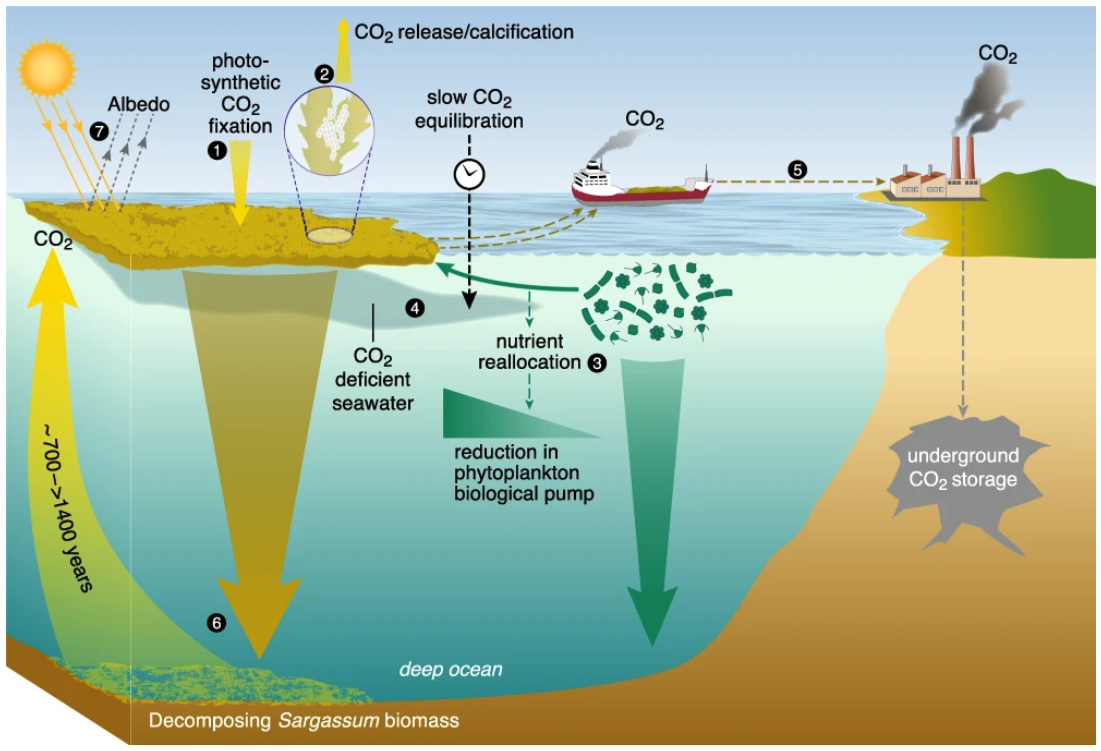 Summary of feedbacks discussed in this study. The numbers in the black circles denote individual processes in the order they were discussed. 1. Photosynthetic carbon fixation by Sargassum consumes CO2 dissolved in seawater. 2. Sargassum provides habitat for epibiontic encrusting organisms to calcify, thereby generating CO2 through complicated feedbacks in the seawater carbonate system. 3. Nutrients taken up by Sargassum become unavailable for phytoplankton thereby reducing the natural carbon sequestration by phytoplankton. 4. CO2 deficient seawater (driven by photosynthesis) can be subducted below the surface layer before it fully equilibrates with atmospheric CO2. 5. Sargassum biomass can be harvested and transported to shore and used for Bioenergy with Carbon Capture and Storage (BECCS) causing CO2 discounts. 6. Alternatively, Sargassum could be deposited on the seafloor but a large fraction of the respired Sargassum carbon would come back to surface on centennial-millenial timescales. 7. Sargassum increases albedo at the sea surface but could also induce complicated indirect albedo effects of unknown sign and magnitude.

Deep ocean seaweed forests could be the answer to climate change by sucking in carbon and pumping out credits. It’s also in demand as a sustainable wonder crop for biofuel or eating.

Some suggest 48 million square kilometres of ocean is suitable for seaweed aquaculture, or 11 per cent of the total ocean area.

And if nine per cent of the oceans were arranged for seaweed carbon sequestration, the atmosphere could return to pre-industrial conditions within decades.

Carbon sequestration involves the permanent removal of carbon from the atmosphere in a “sink” site but growing seaweed for the sole purpose of carbon offsetting or carbon credits has its critics.

However, new global pressure on climate change and investor demand for large projects could head off past concerns about high costs, engineering constraints and hostile growing conditions.

“This is a moonshot solution,” researcher Finn Ross told AAP.

“People either say it’s a terrible idea, we’re wasting valuable feedstock or low-carbon products, or people are saying the opposite, it’s an amazing climate solution, let’s do it, let’s start sinking seaweed.”

He says there is significant industry interest in seaweed as a climate solution and it will need to be funded by carbon markets.

“But rather than rushing into it or writing it off completely, there needs to be more oceanic research.”

One of the reasons the industry is in its infancy is the challenge of dropping seaweed by at least 2000 metres.

The paper warns of large research gaps around how much carbon from seaweed makes it into the deep ocean and the impact on sea bottom organisms.

It is also important to consider competition with phytoplankton for nutrients and ending up making little difference overall.

And it must be possible to track changes in oceanic carbon uptake at points in time during seaweed cultivation.

So far, all proposed ideas have been early-stage commercial ventures with no supporting research, according to the paper published in the academic journal Frontiers of Marine Science.

Concepts include tethered growing platforms in the deep ocean or attached to oil and gas infrastructure or offshore wind farms.

Seaweed could be grown at traditional near-shore coastal operations and then dumped offshore.

Or untethered automated platforms in the deep seas could rise and fall with ocean currents and to avoid shipping.

But those eligible to absorb and store – or sink – blue carbon are limited to the deep mud of coastal areas where mangroves, salt marshes and sea grasses can act as a natural carbon sink.

Some 18,000km of the coastline is protected by mangroves, offering protection from storms and tidal surges for 85,000 homes and 175,000 people.

In 2021, coastal mangroves and seagrass sequestered over 14 million tonnes of carbon – equivalent to the emissions of more than four million cars.

At present, seaweed production as a food crop provides Pacific communities with an income and could contribute to sustainable development goals that countries including Australia have signed up to.

Planting vast swathes of ocean seaweed solely for carbon credits could be another option, as governments and industry look at new climate solutions.

“It is tough, because they’re politically unpopular … other blue carbon projects are much more popular,” Ross said.

But coastal projects have less scope for scaling up, which is the trade-off decision-makers have to make, he said.

Is seaweed farming an effective method to reduce atmospheric CO2?

The world is in need of effective methods to reduce CO2 in the atmosphere, and the ocean could potentially help us to meet this objective. One idea, explored since the 1980s, is to grow seaweeds on platforms in the open ocean to fix carbon and sequester it at great depth (ocean afforestation). But would that work at scale?

To address this question, we utilized the Great Atlantic Sargassum Belt as a natural analogue for seaweed farms distributed across the (sub)tropical Atlantic. We found that the CO2removal potential of ocean afforestation is substantially modified by biogeochemical and physical processes associated with seaweed growth and ecology in the open ocean. Most noticeably, seaweeds provide habitat for calcifying organisms, which form CO2 through changes to seawater carbonate chemistry occurring during the calcification process. Furthermore, seaweed carbon fixation is fuelled by limiting nutrients, which once taken up by seaweeds are not available any longer to support CO2 removal by the natural inhabitants of the open ocean – phytoplankton.

After accounting for offsets to carbon fixation we also considered that seaweeds fix CO2dissolved in seawater, not atmospheric CO2. The atmospheric CO2 has to be subsequently absorbed by the oceans in a second step, which takes much longer (weeks to years) and is more difficult to quantify than one may think.

We also investigated how ocean afforestation influences the albedo (i.e., reflectance) of the Earth. The sign and magnitude of afforestation-related albedo changes on radiative forcing depend on multiple indirect effects linked to the release of substances that influence cloud formation. We didn’t dare to go down this rabbit hole. However, we were surprised to see that even just the brightening of the sea surface through seaweed growth (and thus the direct reflection of light) may have a stronger influence on radiative forcing than the CO2 removal associated with ocean afforestation.

How did we interpret all this? Most importantly, our study does not suggest that CO2 removal with seaweed farming is impossible. However, it shows that successful CO2 removal and its verification requires much more than simply generating seaweed biomass. The complexity of this method could be its Achilles heel and hence become its knock-out criterion, because a large number of interacting processes must be quantified to determine the sign and magnitude of the net climatic impact of ocean afforestation.