Solar thermal – one of the forgotten technology cousins of Australia’s transition to a renewables and storage grid – is pushing for a special package of incentives along the lines of the US Inflation Reduction Act to support long duration storage.

The Australian Solar Thermal Energy Association (Austela) says the IRA in the US offers a 30 per cent credit to energy storage technologies, and is also pushing for a Large-scale Renewable Energy Storage Target (LREST) similar to the Renewable Energy Target that gave wind and solar a launching pad in the 2000s.

Other options include a capacity mechanism with payments based on megawatt hours rather than just megawatts, with longer storage capacity attracting higher values, and government-led offtake agreements to de-risk technologies and lock in long-term purchase deals.

Solar thermal has had many promising starts in Australia, including several pilot projects and a funding deal for a huge facility near Port Augusta that ultimately fell through when the proponent, the US-based SolarReserve collapsed.

Solar thermal technologies held great promise a decade ago, but project proposals lost out to the rapidly falling costs of solar PV, but the industry – including Australia’s Vast Solar – is now looking at a revival based on improved and smarter engineering.

“We know what the problem is – AEMO has indicated that 45 GW of dispatchable storage power generation capacity will be needed by 2050 to deliver around 620,000 MWh per year of electricity,” Lovegrove says.

“But unless we start focusing on the amount of stored energy (MWh) rather than just the power level of delivery (MW) we risk missing out on the best solution.

“To address the shortfall in capacity as coal retires at the lowest net cost to consumers, government and industry, it is critical that future renewable energy policy incentivises, and rewards energy storage projects based on MWh capacity, not simply MW.”

Technologies such as solar thermal, which offers energy storage for up to 17 hours via a complex network of molten salt, turbines, and mirrors, are yet to prove they can be built in Australia at a price that is competitive with traditional wind and solar backed by lithium-ion batteries.

Data from the National Renewable Energy Laboratory (NREL) in the US suggests some Chinese projects have been able to build projects around the $US3000/kW mark, which is a figure that would make them competitive in Australia, says Dominic Zaal, Australian Solar Thermal Research Institute (ASTRI) director.

Utes and too much wind, solar an alternative

The bogeyman being used by long duration storage proponents is that without renewable energy options, such as solar thermal, compressed air, gravity or pumped hydro, the variability of wind and solar will lock in coal and gas power plants as grid stabilisers.

However, there is debate about exactly how much long duration storage will be necessary in Australia’s evolving grid.

A year of simulations using actual generation and demand data by Windlab principal wind engineer David Osmond shows that the National Energy Market could work with just five hours of lithium-ion battery storage (24GW/120GWh), in both summer and winter.

He says a significant overbuild of wind and solar combined with lithium-ion batteries can move the National Energy Market (NEM) away from needing those traditional grid stabilisers of coal, gas, or other long-duration technologies.

Alternatively, the rise of super-sized rooftop solar systems combined with the enormous power of electric vehicle batteries like the Ford-150’s upgraded 9.6 kW Pro Power package, which can power a house, may make a large build out of expensive long duration energy storage unnecessary for night-time use, says Green Energy Markets director Tristan Edis.

Aleksandar Janicijevic, January 7, 2019 from Resilience 2:1
According to the 2015 United Nations Climate Change Conference (COP21) Paris agreement on climate change, global emissions must be reduced by 60% prior to 2050.1 The energy consumption is, however, predicted to double in the next 40 years due to an increasing world population.2 For this reason, it is prudent to explore other sustainable energy sources, in addition to electricity generated by either wind power or solar cells.

This promising research was developed by a group of scientists in the Department of Chemistry and Chemical Engineering, Chalmers University of Technology, at Gothenburg, Sweden. 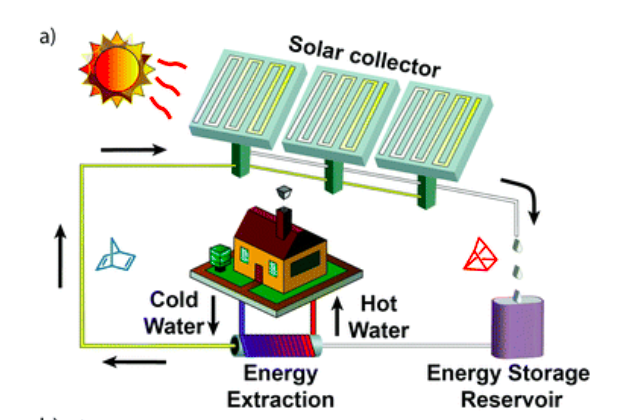 Abstract
The development of solar energy can potentially meet the growing requirements for a global energy system beyond fossil fuels, but necessitates new scalable technologies for solar energy storage. One approach is the development of energy storage systems based on molecular photoswitches, so-called molecular solar thermal energy storage (MOST). Successful outdoor testing shows proof of concept and illustrates that future implementation is feasible. The mechanism of the catalytic back reaction is modelled using density functional theory (DFT) calculations rationalizing the experimental observations.

Thermal energy can be used for a broad range of applications such as domestic heating, industrial process heating and in thermal power processes. One promising way to store solar thermal energy is so-called molecular solar thermal (MOST) energy storage systems, where a photoswitchable molecule absorbs sunlight and undergoes a chemical isomerization to a metastable high energy species. Here we present an optimized MOST system (providing a high energy density of up to 0.4 MJ kg−1), which can store solar energy for a month at room temperature and release the thermochemical energy “on demand” in a closed energy storage cycle. In addition to a full photophysical characterization, solar energy capture of the present system is experimentally demonstrated by flowing the MOST system through an outdoor solar collector (≈900 cm2 irradiated area). Moreover, catalyst systems were identified and integrated into an energy extraction device leading to high temperature gradients of up to 63 °C (83 °C measured temperature) with a short temperature ramp time of only a few minutes. The underlying step-by-step mechanism of the catalytic reaction is modelled in detail using quantum chemistry calculations, successfully rationalizing the experimental observations.

a, Anna Roffey a, Raul Losantos

b, Anders Lennartson a, Martyn Jevric a, Anne U. Petersen

The development of solar energy can potentially meet the growing requirements for a global energy system beyond fossil fuels, but necessitates new scalable technologies for solar energy storage. One approach is the development of energy storage systems based on molecular photoswitches, so-called molecular solar thermal energy storage (MOST). Here we present a novel norbornadiene derivative for this purpose, with a good solar spectral match, high robustness and an energy density of 0.4 MJ kg−1. By the use of heterogeneous catalyst cobalt phthalocyanine on a carbon support, we demonstrate a record high macroscopic heat release in a flow system using a fixed bed catalytic reactor, leading to a temperature increase of up to 63.4 °C (83.2 °C measured temperature). Successful outdoor testing shows proof of concept and illustrates that future implementation is feasible. The mechanism of the catalytic back reaction is modelled using density functional theory (DFT) calculations rationalizing the experimental observations.