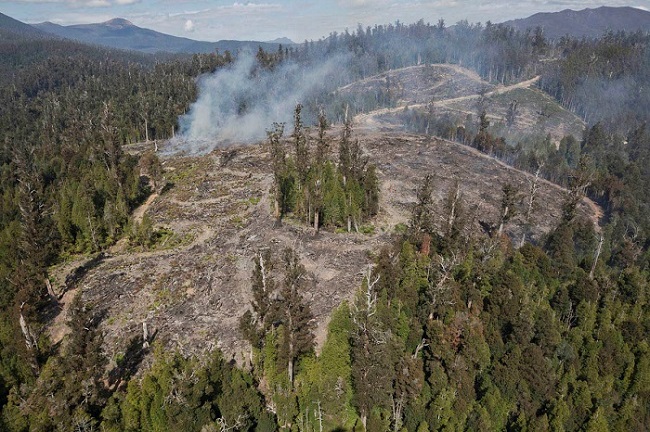 The Bob Brown Foundation has said an issue with a decades-old piece of legislation means the Tasmanian government has been illegally logging forests in the state for years.

The government has denied the issue rendered past logging operations “illegal”, however Resources Minister Guy Barnett said he intended to introduce legislation that would remove doubt.

“A highly technical administrative matter relating to the issuing of a delegation made under the Forest Practices Act 1985 has recently been identified,” he said in a statement.

“To provide certainty for our industry and to remove doubt, the government intends to introduce validating legislation, when Parliament resumes, to resolve this technical issue at law.”

While the exact nature of that administrative matter hasn’t been disclosed, the Bob Brown Foundation (BBF) believes it has to do with the ability of the state government to delegate the issuing of logging permits to the independent Forest Practices Authority.

The BBF said any attempt to “retrospectively legalise” logging operations was outrageous.

“The law is the law, and no ordinary citizen can retrospectively change the law’s technicalities to claim ignorance, to rescue themselves from prosecution or imprisonment,” BBF spokesperson Jenny Weber said.

“So, the minister is proposing to back date laws to cover up criminal behaviour… and this is truly shocking.”

Call for logging to be ‘immediately halted’

The issue with the Forest Practices Act was identified late last month during legal proceedings against four BBF members, including Bob Brown himself, who were charged with trespassing for protesting against logging in the Eastern Tiers near Swansea back in 2020.

The group said those charges were suddenly dropped without explanation.

“I heard the police prosecutor say that the solicitor-general would be preparing validating legislation, and we realised something was amiss,” Ms Weber said.

“This is the revelation that we needed from the minister to prove that the [logging of] wildlife-rich forest across Tasmania for decades has been illegal.”

Greens leader Cassy O’Connor released a statement, calling for all logging in the state to be immediately halted.

“Guy Barnett has admitted his government has broken the law by logging forests in breach of the Forest Practices Act 1985,” she said.

“It is unacceptable for a Minister of the Crown to sign off, with no authority, on illegal logging for at least the next two months.”

However, the ABC understands the Forest Practices Authority will continue to issue permits, and no such cessation of logging activity will take place.

“The independent Forest Practices Authority has undertaken measures to ensure that the system continues to remain robust,” Mr Barnett said.

“It is no secret that the radical Bob Brown Foundation and their parliamentary allies in the Greens will take any opportunity in their ongoing attempts to shut down our sustainable native forestry sector.

“In stark contrast, we make no apology for standing up for the thousands of Tasmanians, many in regional areas, who work in our sustainable native forestry industry.”

Mr Barnett said criticism from the Greens was hypocritical.

“I am advised that similar delegations have been issued since the commencement of the Act in the mid-1980s, including under both Labor and Labor-Green governments.”

The BBF has not ruled out taking legal action against the government to force a suspension of operations.

“We are known for our legal tactics,” Ms Weber said. “So, we will be looking at that.”

Regardless, the dropping of charges against their members on this “technicality” has emboldened the BBF, which plans on increasing its demonstrations across the state from today.

“Instead of sending the police in to arrest the protesters, why don’t the government just put their hands up and halt the logging?” Ms Weber said.

“Because It’s far too risky for logging to continue under such a bungled mess.

“All protesters who have been arrested while upholding the Tasmanian laws… need to have their charges dropped, and they need to be compensated.”

“Large areas of Tasmania’s old growth and native forest have been logged in the past 40 years. This is habitat for many threatened species including the critically endangered swift parrot, Tasmanian devil and many more,” Ms Bookless said.

“We really need to understand the nature of the error that’s led to this situation; it’s not enough for the Government to simply say this is an administrative error.”

She said the fact the government said it would pass retrospective legislation to correct the issue was concerning.

“It certainly would suggest that it is concerned that this logging has been illegal over this time… it does raise questions around whether there have been other issues and regulations within the Forest Practices Act that have been similarly overlooked.”