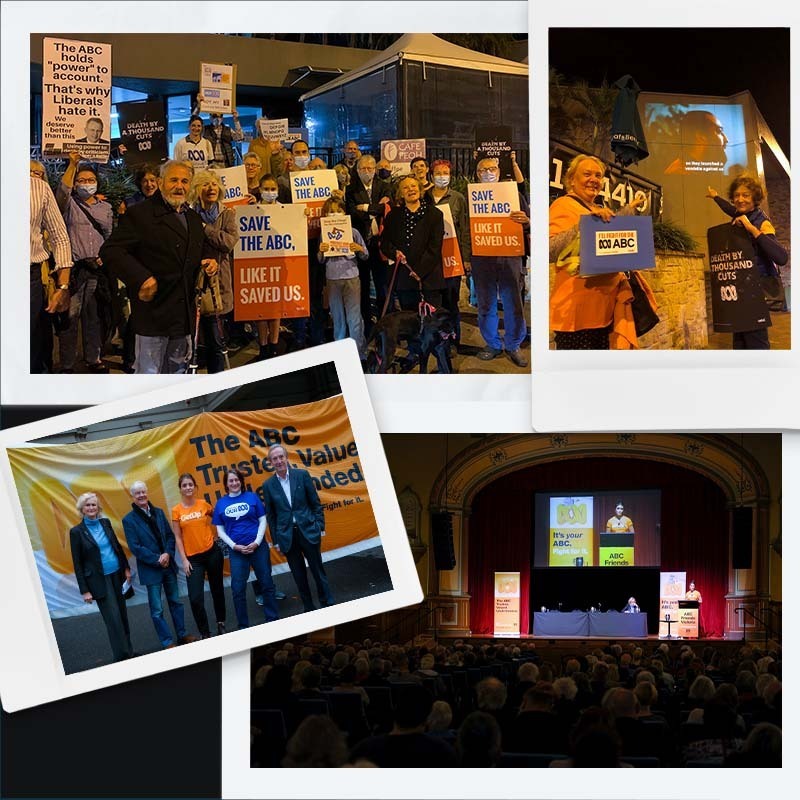 On Monday when I heard the Morrison Government was pledging $3.3 billion in ABC funding for the next three years,1 I had mixed emotions. Because while it’s not at all what it seems, it’s hard proof our campaign is working.

With so much to unpack, here are three things you need to know about Morrison’s ABC budget announcement this week.

1️⃣ Morrison is worried about losing votes on the ABC
Morrison is trying to neutralise the ABC as a sore spot for the Coalition in the lead up to the upcoming election. Monday’s budget announcement is our clearest indication yet that he’s worried the Coalition’s track record on the ABC will lose him votes in key electorates around the country.

Even Michael Kroger – the Liberal powerbroker who labelled the ABC “political acid” – told Andrew Bolt on SkyNews that Morrison was “clearing the decks” on any ABC fight ahead of the election.2,3

And Morrison isn’t the first Liberal leader desperate to appease voters on the ABC. We saw it in the final hours of the 2013 election, when Tony Abbott pledged “no cuts to the ABC or SBS” – only to slash $28 million from the ABC in his first budget.4 And before the 1996 election, when John Howard promised to maintain ABC funding, before cutting the broadcaster’s budget by $66 million.5

Morrison’s announcement was intended as a deliberate distraction from the Coalition’s continued attacks on our public broadcasters. Because…

2️⃣ Morrison has not restored a single dollar of cut funding to the ABC
But didn’t he just pledge $3.3 billion to the ABC? Yes – but remember that is not extra funding. Instead, Morrison has announced he will simply continue to fund the ABC at current levels – no more, no less.

It’s clever spin – ABC’s funding is complex at the best of times, and Morrison has consistently used this to his advantage.

Here’s more detail: In Monday’s announcement, Minister Fletcher claimed the pledged funding is “an increase of $87.2 million over the current triennium”.6 That “increase” is because the Morrison Government has abandoned a punitive Turnbull ‘indexation freeze’ – a policy that prevented funding from rising with inflation, and cost the ABC $84 million.7 This cut lead to drastic cuts in programming and job losses, while being consistently denied by Morrison as a cut at all.8,9

And this is where we get to the clincher. Not a single dollar of Coalition cuts made since 2014 have been restored. From 2014 to 2024 – taking into account Morrison’s pledge for the coming years – Coalition cuts will now total $1.2 billion.10

$1.2 billion in Coalition cuts. All while the ABC is saving lives in the bushfires. Keeping our kids engaged in lockdowns. Sharing stories across the country, from community to community. No wonder Morrison is desperately trying to neutralise our campaign because…

3️⃣ Our campaign is working – and we can’t stop now.
From bushfire-ravaged Eden-Monaro to inner-city seats like Kooyong, GetUp members have made it their business to stand up for the ABC and call out government lies and attacks. Together we’re winning the public narrative and making it politically toxic to cut the ABC – proved without a doubt by Morrison’s desperate announcement on Monday.

We’ve funded massive national ad blitzes – strategically timed and located to have the most impact. We’ve held rallies and lobbied in the halls of Parliament. We’ve released an explosive report into cuts that cornered Morrison – and we’re about to release another in a few days time! We’ve made a powerful film, laying bare why and how successive Coalition Governments have undermined our ABC. We’ve put the Morrison Government on the back foot, and it’s clearly cutting through. That’s why we’re ramping up our efforts ahead of the Federal Election to ensure Morrison’s spin doesn’t cut through.