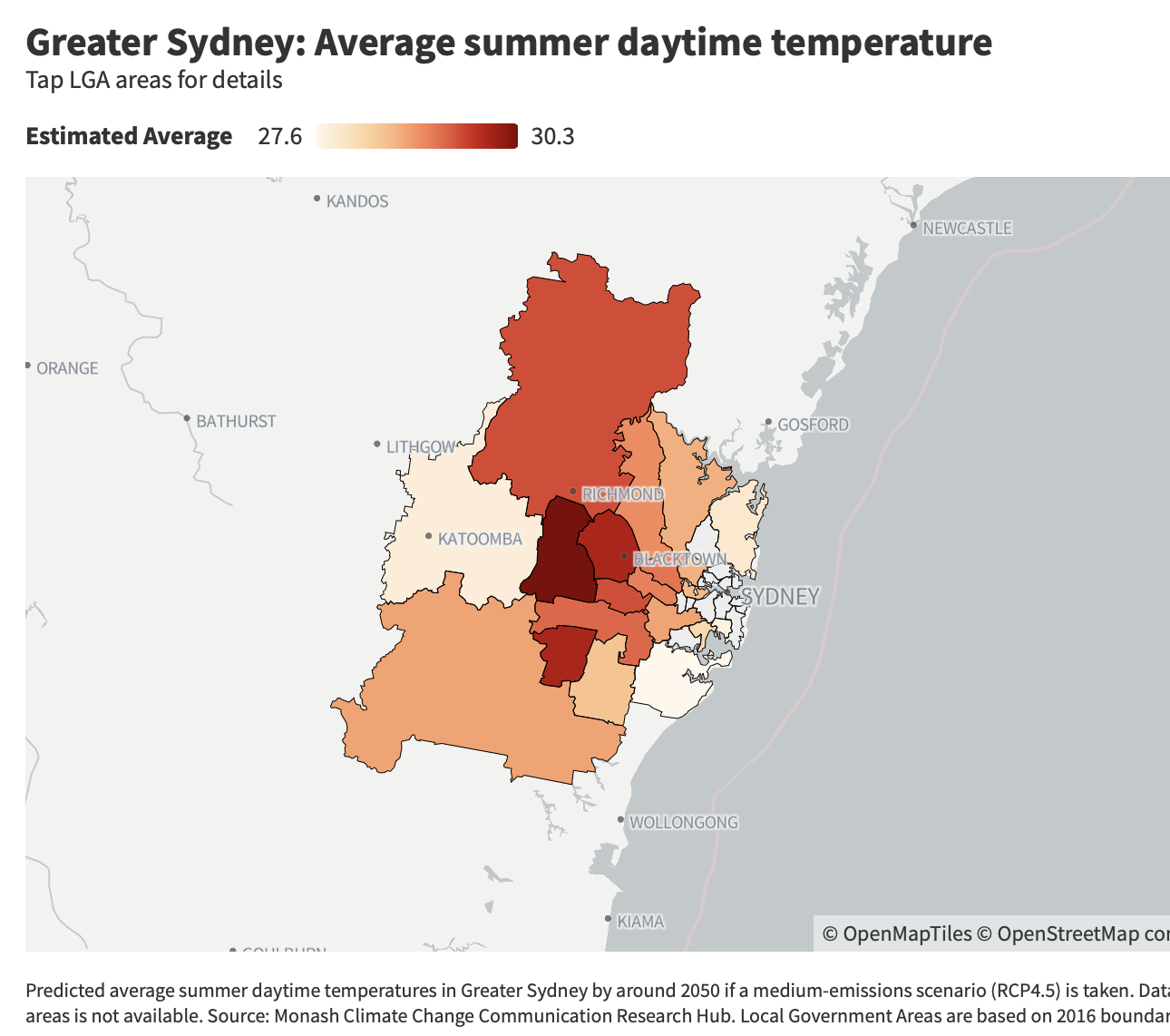 One in 11 Australians live in this part of the country that already experiences temps 10C hotter than other parts. But it’s going to get worse.

Greater Western Sydney is home to around one in 11 Australians but many of its suburbs are slowly becoming heat sinks that some believe won’t be safe to live in.

Temperatures in western Sydney can already be 10 degrees higher than in the city’s eastern suburbs and data now shows the frequency of very hot days in the west are expected to increase at double the rate of those along the coast.

Time Is Now is part of news.com.au’s partnership with the Monash Climate Change Communication Research Hub, looking at the impacts of climate change across Australia by 2050.

Research provided to news.com.au exclusively from the Monash Climate Change Communication Research Hub, allows Australians to see how conditions could change in almost every local government area across the country by 2041-2060, compared to average simulated temperatures in 1986-2005. An interactive map, showing the predicted average summer daytime temperature across greater Sydney, provides an alarming image of what the city’s most populated area could be in for.

If the world follows a medium emissions scenario — which assumes the world waits until 2100 to reach net zero — areas of western Sydney would experience significantly more extra days of extreme heat (when temperatures exceed 35C) than other areas of the city by around 2050.

The 10 local government areas (LGAs) expected to be the worst affected were all located in this region including Penrith, Liverpool, Blacktown and Camden. These areas are forecast to experience an average of four extra days of extreme heat by around 2050.

The LGAs of Blue Mountains, The Hills Shire, Fairfield, Parramatta, Cumberland and Canterbury-Bankstown are forecast to get an average of three extra days.

This is in contrast to the Sutherland Shire, which includes areas such as Cronulla Beach, which is only expected to experience one extra day of temperatures over 35C, and other coastal councils such as Botany Bay and Rockdale (now merged to form Bayside Council), which were expected to get an extra two days.

It isolates people and impacts the activities they can do, such as sports and work, as well as children’s ability to learn at school, she said.

Dr Loo said heat can impact people’s mental health and that suicide and domestic violence both increase during heatwaves.

“People can tolerate a degree of heat during the day but if it’s hot at night, that’s when fatalities increase,” she said.

Heat could also keep people from socialising, with older people choosing to stay indoors and young children missing out on precious time outdoors.

“In Western Sydney we don’t have much green space for kids to go and play when it’s hot so it impacts the ability for mums and kids to go out,” Dr Loo said.

She said isolated individuals were more at risk and it was often over 65s with little social connection and pre-existing chronic diseases who died at home from heat related illnesses.

“We know heatwaves are the silent killer and more people have died from heatwaves than all other natural disasters combined,” she said.

“At the moment about 2 per cent of deaths are attributable to heat in Australia and I think that’s been underestimated.”

Data available shows the 11 LGAs predicted to have the highest average summer temperatures in Sydney by around 2050 were all located in the greater western Sydney region.

Penrith topped the list, rising by an average of 1.3C for an expected summer average of 30.3C by around 2050.

While these areas are set to experience the highest temperatures, others are expected to feel a bigger difference, with average summer daytime temperatures in areas such as the Blue Mountains and Hunters Hill forecast to rise by around 1.4C.

The increasing awareness of the dangers of heat have seen unions such as the CFMEU advise its members to leave work sites when temperatures reach 35 degrees.

Rising temperatures could also have implications for summer sports.

The Climate Council also released a report this year that suggested heatwaves in Sydney and Melbourne could reach highs of 50C by 2040, potentially disrupting summer sports including the Big Bash League (BBL) cricket, AFLW games, the Tour Down Under cycling race, the Australian Open tennis, A and W-League football and community sports. 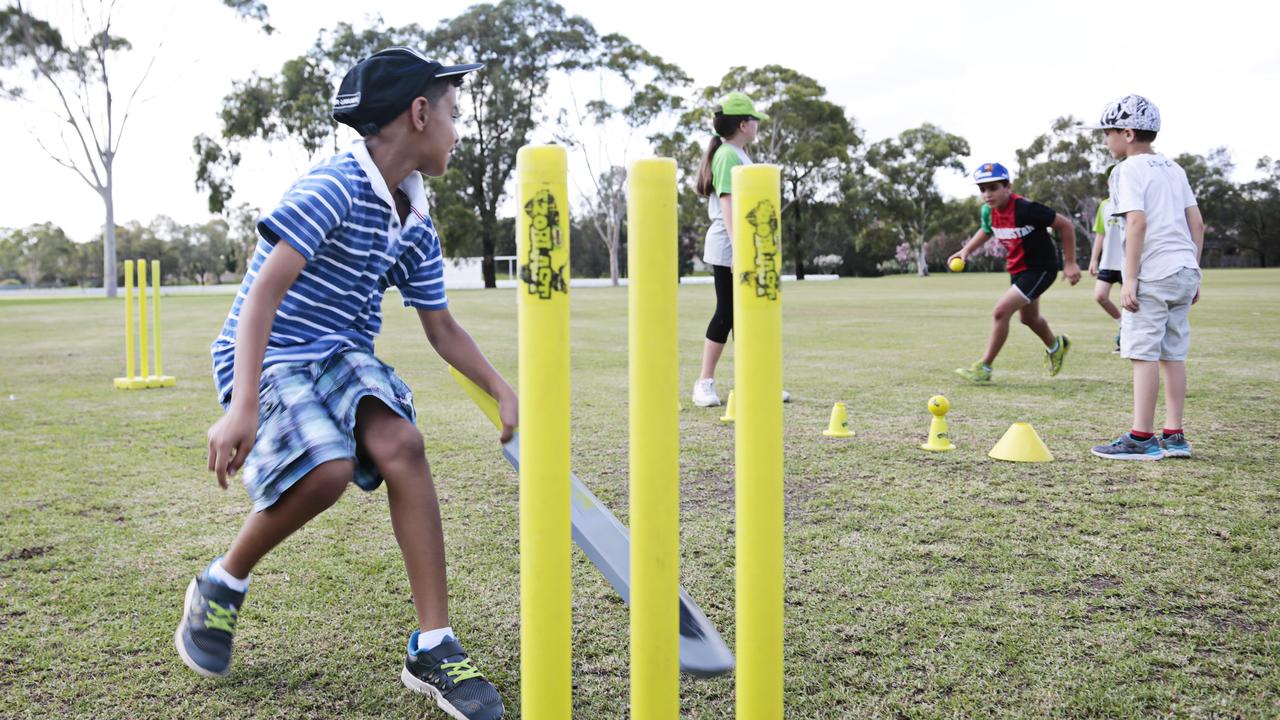 Summer sports like cricket could be impacted by extreme temperatures in the future.

“If global emissions continue to increase, Australian sports will have to make significant changes, such as playing summer games in the evening or switching schedules to spring and autumn,” Climate Council head of research and lead author Dr Martin Rice said.

Former professional netball player Amy Steel was forced to retire in 2016 after suffering heat stroke while playing indoors during a national pre-season tournament.

“That incident left me with lifelong health issues, including chronic inflammation and fatigue,” she said.

“If this could happen to me – an elite athlete – then what are the risks for community sporting clubs, as climate change makes heatwaves longer, hotter and more frequent?”

Temperatures in the west are already edging close to 50C with the suburb of Penrith hitting 48.9C on January 4, 2020 as bushfires raged around the area.

During days of extreme heat, Dr Loo advises her patients to head to airconditioned spaces, with Blacktown recently running a trial that saw church halls, libraries and the local shopping centre open for longer to help keep people cool and improve social interaction.

Dr Loo said children at school who did not have access to airconditioned classrooms faced an impaired ability to learn.

“Not every room is airconditioned and children think optimally at 22-24C,” she said.

The hottest places at school can also be on playgrounds so this makes it harder for children to socially connect and play sport.

Western Sydney University urban heat expert Dr Sebastian Pfautsch has conducted research that shows common playground surfaces, including AstroTurf and soft-fall rubber, can heat up to more than 100C on a summer’s day.

“The injuries from these materials are horrific,” he has previously said. “We have reports of toddlers with second-degree burns on their feet.” Playgrounds can be hotter than other school areas so need proper shading.

“During a heatwave, temperatures across Parramatta can vary by 8C to 10C,” he said.

He found that tree canopies and reflective surfaces could reduce temperatures by as much as two degrees on a sweltering day.

“Urbanisation itself increases the temperature in cities,” he said. “When you replace paddocks and bushland with roads and buildings, you lose those open, pervious surfaces that take up rainwater, evaporate it and generate a cooling effect.”

Local authorities are increasingly recognising heat as an issue but Dr Loo is frustrated when she still sees a “sea of black roofs” while driving past new housing developments.

“Black roofs drive me insane — consumers don’t understand they can save money if they have a lighter coloured roof so it doesn’t cost as much to cool down houses,” she said.

Dr Loo believes the heat problem is being worsened by continuing bad development in the area.

“They are continuing to build ‘heat islands’, mowing down trees, building houses close together, often with black roofs,” she said. “They are creating heat sinks.”

She said building houses that rely on airconditioning to keep them cool also made the problem worse because the systems pumped the heat outside.

“People can only adapt to certain temperatures, once it gets over 40C we can’t acclimate to survive that — if you don’t have infrastructure in place.” Dr Loo said homes in the Eastern Suburbs were more likely to have double-glazed windows and doors, as well as a better design and more greenery. In places like Europe where populations suffer through extreme cold temperatures, homes are built with double glazed windows and heating.

“The disaster is the absence of planning in this area,” Dr Loo said.

“The climate science is getting better and more specific about predictions and the way to build (better houses) is known, it’s just that we don’t have infrastructure policies in place at state level.

“We don’t have mandatory building codes for insulation or solar panels so that energy is cheaper.”

Greater Sydney’s climate means that communities are exposed to both heatwaves (more than three consecutive days of abnormally high temperatures) and extreme heat (days above 35C).

Dr Loo said those renting properties, including those in social housing, were more at risk because they could often not afford things like airconditioning so focus should be put on making homes heat resilient by design, and installing things like solar panels to bring down electricity costs.

“The projected growth for the population (in Western Sydney) is worrying,” Dr Loo said.

“We can’t just keep building buildings (that are) dangerous for people to live in.

“We know how to build safely but Sydney continues to be built so people aren’t safe, even in their own homes.”

Dr Loo said people often did not understand how dangerous heat could be.

An estimated 167 excess deaths were recorded during the week of the heatwave, equal to a 24 per cent increase in deaths.

“People underestimate the risk, and if they are dehydrated they might be confused and not realise,” Dr Loo said.

Dr Loo said one of the ways the body cooled itself was by pumping warmer blood from areas like the heart towards to the skin, where it is cooler.

“If you’re not pumping adequately or you don’t have good circulation it’s harder to cool down,” she said.

Sweating also cools the body but causes the body to lose fluids so if someone is not drinking enough water, or has a poor heart function or circulation, they are more likely to die from heat related illness.

“That’s why someone with a poor heart, who’s vulnerable and lives alone is more likely to die,” she said.

“People who live in houses that are not safe in heatwaves are really at risk.”