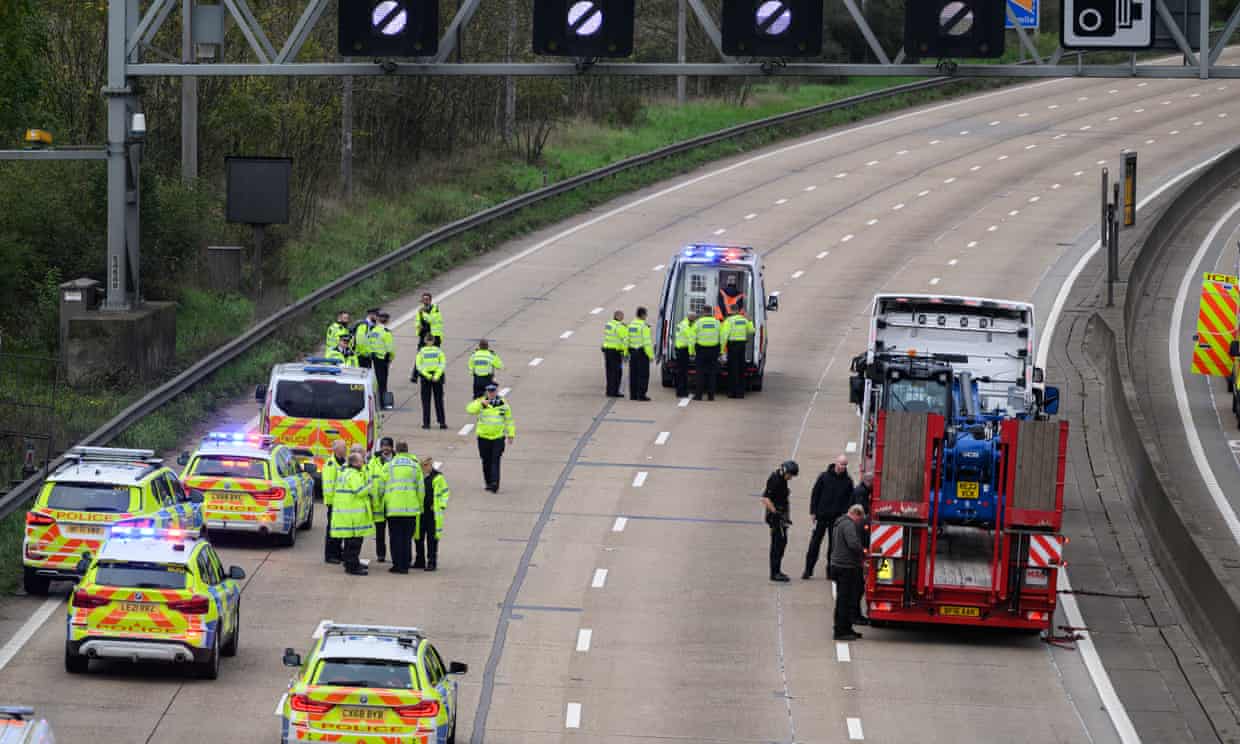 Just Stop Oil protesters this week are climbing gantries on the M25, blocking the Dartford tunnel, causing long delays and getting arrested in droves. Meanwhile the public order bill that would crack down on disruptive protests has been passed by MPs and is now being read in the House of Lords. The Lords should throw out this despicable piece of legislation.

It’s curious how all those on the right who call themselves libertarians and claim to care about freedom from the state’s oppressive regulations (many of which keep water, air and food safe) are in favour of a bill that seeks to imprison people with bike locks, or anything harmless that could be used in protest. A prison sentence of 51 weeks beckons for “causing a public nuisance” – not harm, hurt or injury.

The bill’s serious disruption prevention orders can ban anyone from a protest who has protested twice in the last five years, even though they have no conviction. That includes me, and millions of others. Have you been on an anti-austerity, anti-Brexit, anti-Iraq war, anti-pay cuts or climate crisis march? Facial recognition may have already identified you. Hertfordshire police even arrested three journalists covering the oil protests this week, one from LBC, ignoring their press cards. The home secretary, Suella Braverman, has since ordered the police to take “a firmer line” against the “radicals, the road-blockers, the vandals, the militants and the extremists”.

It’s doubtful that longer sentences will deter those who fear the end of life on a burning planet. The head of the UN, António Guterres, opened Cop27 apocalyptically warning that humanity is “on a highway to climate hell with our foot still on the accelerator”. Yet all the force of his position and oratory still fails to galvanise global leaders to put this catastrophe ahead of their other domestic priorities. There is a collective safety in numbers; none of them are as ashamed as they should be, putting local politics ahead of annihilation. As Martin Wolf of the Financial Times calculated this week, the annual cost to rich countries in additional finance needed to meet 1.5C would only be 0.05% of their combined GDP, a puny price for human survival. Yet they are not paying up.

Of course protesters sound increasingly frantic. This isn’t an obscure issue, but the scientific truth told by reputable scientists. Every schoolchild knows Greta Thunberg is right. This government’s response was Rishi Sunak’s reluctant last-minute trip to Cop27, where he uttered excruciatingly banal platitudes and stupid boasts, before scuttling home to a government cracking down on protesters.

Needless to say it’s the protesters, not the world-burners, who draw the right’s fire. Their response to protesters usually comes with that bizarre class hatred they use against the left, while accusing the left of being the class warriors. Here’s the Times leader’s cheap snidery: “Effective action will mean bearing onerous costs and paying poorer nations to carry these too. Taxpayers will suspect they are making sacrifices not shared by well-heeled activists who block roads and bridges.”

Would the Times approve of these Just Stop Oil protesters if they could prove their bona fide working-class credentials? The fact is that many revolutions, protests and rebellions have been led by educated and middle-class people rebelling against their own class, often on behalf of others. Those whom the right smears as “metropolitan elites” are usually the vanguard, freer to act. Almost half of millennials have a degree, they are more politically aware and active than older cohorts (only one in seven went to university in my day). One reason the right now wants to limit university places is to stop education that breeds progressives: knowledge hardens more people against the rightwing lies that brought this country low with Brexit, voted for mostly by the old.

Knowledge of imminent global collapse obliges everyone to act. The question is how? What to do? Blocking traffic, and glueing yourself to buildings and roads gets attention, while polite Saturday marches with police permission don’t, unless they could summon millions – which they haven’t so far. Here’s the problem. Does causing a nuisance to drivers gain the right attention or does it damage its own cause? For protests to work, they need to constantly find new ways to shine a light on their cause, with wit and inventiveness. Led By Donkeys are the geniuses who keep surprising people with their messages beamed on to public buildings, their hoarding signs and videos reaching millions on social media. UK Uncut, whose protests I joined during the early years of austerity, had a similar cleverness, such as occupying banks and turning them into libraries. They occupied businesses that paid virtually nothing in tax. What works? There is no algorithm for effective protest. But doing nothing is not an option.

Civil disobedience and breaking the law guarantees publicity. Does it work? Peaceable suffragists claimed the disobedient suffragettes antagonised public and politicians, delaying their cause. CND in the early days was split between law-abiding Aldermaston marchers (that was me), and the Committee of 100 founded by Bertrand Russell and others: he was 89 when they were dragged off to prison from sit-downs outside parliament. Anarchists took over and the Committee of 100 fell apart, a fate shared by many other left and feminist groups. XR and climate groups are similarly riven by those who think Roger Hallam’s no-holds-barred protests are counter-productive. The moderates don’t fear arrest but seek the best way to bring climate catastrophe to the top of voters’ demands.

For all those rightwing commentators (most of whom are not, these days, climate deniers) who sneer at protesters, there is only one question. If not blocking traffic, then what? You have to suggest better ways to alert voters, other ways to save the planet and your children and grandchildren. You have to do something yourself – or at least back the people who are doing whatever they can.