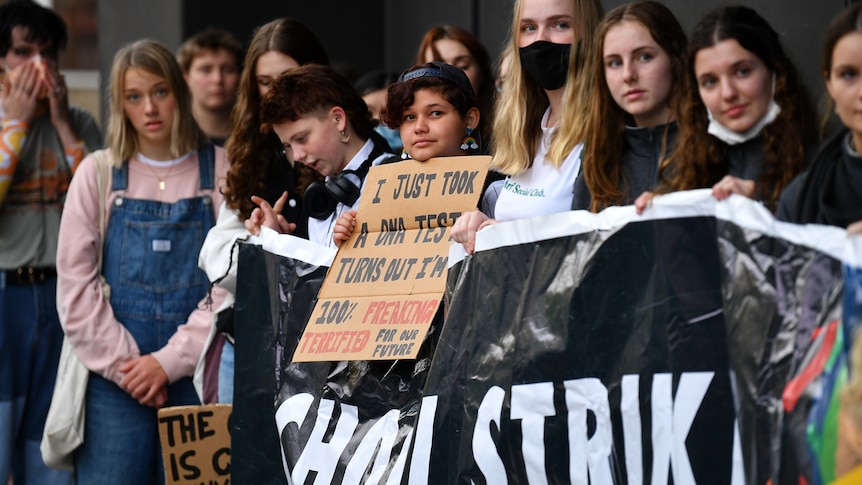 Image: This election, more people list climate change as their number one issue, according to ABC’s Vote Compass.(AAP: James Ross)

Federal election 2022: Labor and Coalition climate change policies both breach the Paris Agreement. So what does the science say?

Climate change has sharpened as a central issue this federal election.

According to the ABC’s Vote Compass, more people list it as their number one issue this election than any other topic,  so if you’re one of those factoring the climate into your vote, it’s worth knowing what’s on offer.

You might want to first consider this government’s climate report card since it was elected in 2013.

It was then that Australia’s notorious “climate wars” really kicked into gear.

The Liberal-National government came to power with Tony Abbott’s promise to “axe” the country’s Emissions Trading Scheme, or “carbon price”.

And Abbott went about doing that, and more, attempting to dismantle most of the agencies set up to deal with climate change.

The wars didn’t end there. A string of emissions policies were mooted by the government and its advisors, before being dropped — sometimes through a change of the party’s leader.

The resulting policy inconsistency has even caught the attention of the world’s climate scientists, with the most recent Intergovernmental Panel on Climate Change report — a sober and entirely apolitical document released in March this year — identifying Australia’s “lack of consistent policy direction” as a “key risk” for the country as it navigates the impacts of climate change.

LIVE UPDATES: Read our blog for the latest news on the 2022 Australian federal election

Nearly 10 years after the climate wars kicked up a gear with this Liberal-National government’s election, Australia will decide whether to give the Coalition another shot.

So would another three years under Prime Minister Scott Morrison deliver the ambition and consistency desired by the world’s climate scientists — or would things be any different on Anthony Albanese’s watch?

The parts of Rudd-Gillard government’s climate apparatus that it didn’t dismantle (like the Clean Energy Finance Corporation and the Australian Renewable Energy Agency) are now central to the Coalition’s climate pitch.

Scott Morrison has wrangled his party to support the long-term goal of getting our total greenhouse gas emissions to net-zero by 2050, although there are vocal members of theLiberal and National parties that have expressed opposition to the goal.

To get there, the Morrison government has rolled all the existing efforts of government agencies into what it’s calling its “Long-Term Emissions Reduction Plan”.

The IPCC says climate change is now a threat to human wellbeing, warning the window we have to act is “rapidly closing”. The plan highlights a range of technologies it hopes will develop to the point where significant emissions reductions are achieved, including carbon capture and storage, hydrogen and “ultra low-cost solar”.

There is no additional spend associated with the plan — it instead tallies up what the government is already doing.

But it notes that if the technologies do develop as hoped, there will still be a large requirement for “offsets” — where businesses are paid to reduce emissions or remove greenhouse gases from the air.

According to the Morrison government, these will account for at least 10 per cent of the cuts needed between 2005 and 2050.

Whether that scale of offsets is possible as we get close to 2050, and how much it would cost, is unclear.

Climate change is being buried this election. So we asked some of Australia’s leading climate scientists for their verdict on how the major parties’ policies stack up. Now, in what climate scientists say is the crucial decade to 2030, the Coalition’s target remains the same as that advocated by Tony Abbott: a 26 per cent cut below 2005 levels by 2030.

According to the emissions analysis group Climate Analytics, who advocate for strong action on climate change, the target is “highly insufficient”, and consistent with a catastrophic 3 degrees Celsius of global warming.

Labor’s election pitch on climate change is a mixed bag of policies, which it claims will “end the climate wars”.

Its justification for that claim appears to be an attempt to find a middle path on climate change — a path between what the science says is needed, and what the Morrison government is doing.

For example, Labor’s 2050 target is the same as the Coalition’s — net zero.

The 2030 target they’ve adopted — a 43 per cent cut by 2030 — is exactly what was recommended by the Business Council of Australia, a group traditionally more in line with the Coalition, and marginally weaker than what it took to the election in 2019.

And importantly, one of Labor’s central policies is merely a strengthening of an existing Liberal-National government policy.

That policy is the “safeguard mechanism” which puts a cap on the emissions from some of our biggest polluters, and makes them buy offsets (essentially paying other companies to reduce emissions) if they go beyond those caps.

It was designed by the Abbott government, with then-environment minister Greg Hunt saying the caps were expected to be tightened over time. But that never happened, so despite remaining in place, the policy is doing little work.

Labor though says it’s resolute in its mission to tighten those screws.

It’s promising electric car discounts, and batteries in communities to help store electricity from rooftop solar for use at night.

Modelling commissioned by Labor suggests the policies will meet the emissions target and create jobs. It also suggests it will lower power bills — something the Coalition has disputed.

According to Climate Analytics though, Labor’s 2030 target is consistent with 2C of warming — which would still breach the Paris Agreement, in which Australia promised to keep warming “well below” 2C.

This year, voters interested in climate change have a number of options beyond the two major parties.

The Greens have a comprehensive climate policy backing targets in line with what scientists say is needed to do our fair share of stopping warming at 1.5C: a 75 per cent cut in emissions by 2030.

The party has a policy to immediately stop the approval of new coal, oil and gas infrastructure and to put billions into public transport and EV charging networks.

With Australia one of the world’s biggest exporters of fossil fuels, the Greens also want to end the export of thermal coal by 2030 and stop oil and gas exports by 2035.

The Greens’ targets and policies are the most closely aligned with what climate scientists are saying Australia’s fare share of climate action would be. If the Greens hold some power with a minority government, they will work to push climate policies to be more ambitious.

In some key seats around the country, there are also a range of so-called “teal” independents backed by the Climate 200 group.

Their emissions targets vary, depending on the candidate. But they range from a 50 per cent to 75 per cent cut by 2030, which is in line with between about 2C and 1.5C of warming.

With Australia widely considered a “laggard” on climate change, and the IPCC pinpointing our flip-flopping policies as a “key risk” — the electorate now appears keen for something more substantial.

But with similar assessments made before the 2019 election, only Saturday’s result will reveal whether the public will is stronger than that of the political will, when it comes to climate.