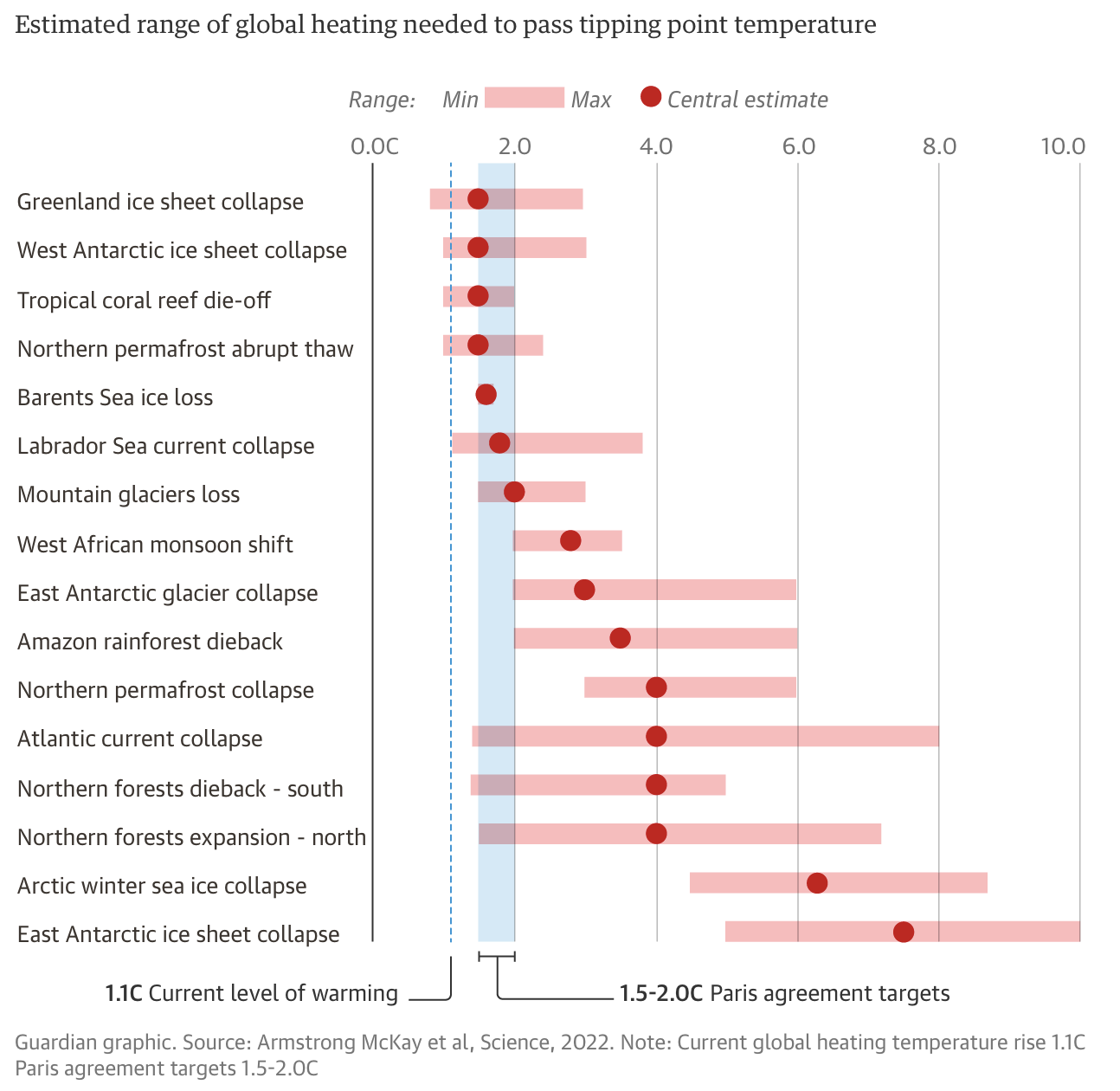 Damian CarringtonEnvironment editor
@dpcarrington
The climate crisis has driven the world to the brink of multiple “disastrous” tipping points, according to a major study.

It shows five dangerous tipping points may already have been passed due to the 1.1C of global heating caused by humanity to date.

These include the collapse of Greenland’s ice cap, eventually producing a huge sea level rise, the collapse of a key current in the north Atlantic, disrupting rain upon which billions of people depend for food, and an abrupt melting of carbon-rich permafrost.

At 1.5C of heating, the minimum rise now expected, four of the five tipping points move from being possible to likely, the analysis said. Also at 1.5C, an additional five tipping points become possible, including changes to vast northern forests and the loss of almost all mountain glaciers.

In total, the researchers found evidence for 16 tipping points, with the final six requiring global heating of at least 2C to be triggered, according to the scientists’ estimations. The tipping points would take effect on timescales varying from a few years to centuries.

“The Earth may have left a ‘safe’ climate state beyond 1C global warming,” the researchers concluded, with the whole of human civilisation having developed in temperatures below this level. Passing one tipping point is often likely to help trigger others, producing cascades. But this is still being studied and was not included, meaning the analysis may present the minimum danger.

Prof Johan Rockström, the director of the Potsdam Institute for Climate Impact Research, who was part of the study team, said: “The world is heading towards 2-3C of global warming.

“This sets Earth on course to cross multiple dangerous tipping points that will be disastrous for people across the world. To maintain liveable conditions on Earth and enable stable societies, we must do everything possible to prevent crossing tipping points.”

Dr David Armstrong McKay at the University of Exeter, a lead author of the study, said: “It’s really worrying. There are grounds for grief, but there are also still grounds for hope.

“The study really underpins why the Paris agreement goal of 1.5C is so important and must be fought for.

“We’re not saying that, because we’re probably going to hit some tipping points, everything is lost and it’s game over. Every fraction of a degree that we stop beyond 1.5C reduces the likelihood of hitting more tipping points.”

Recent research has shown signs of destabilisation in the Amazon rainforest, the loss of which would have “profound” implications for the global climate and biodiversity, as well as the Greenland ice sheet and the Gulf Stream currents that scientists call the Atlantic meridional overturning circulation (Amoc).

A recent report by the Intergovernmental Panel on Climate Change said the risk of triggering climate tipping points becomes high with 2C of global heating.

The analysis, published in the journal Science, assessed more than 200 previous studies on past tipping points, climate observations and modelling studies. A tipping point is when a temperature threshold is passed, leading to unstoppable change in a climate system, even if global heating ends.

The nine global tipping points identified are: the collapse of the Greenland, west Antarctic and two parts of the east Antarctic ice sheets, the partial and total collapse of Amoc, Amazon dieback, permafrost collapse and winter sea ice loss in the Arctic.

The assessment of the Amazon tipping point did not include the effects of deforestation. “The combination of the warming and the deforestation could bring that a lot sooner,” said Armstrong McKay.

A further seven tipping points would have severe regional effects, including the die-off of tropical coral reefs and changes to the west African monsoon. Other potential tipping points still being studied include the loss of ocean oxygen and major shifts in the Indian summer monsoon.

The scientists define crossing a tipping point as “possible” when its minimum temperature threshold is passed and “likely” beyond the central threshold estimate.

Prof Niklas Boers, at the Technical University of Munich, said: “The review is a timely update on the Earth’s potential tipping elements, and the threat of tipping events under further warming is real.”

He added that much more research was needed to narrow down the critical temperature thresholds, with current estimates remaining highly uncertain.

Prof Thomas Stocker, at the University of Bern, said: “The science on tipping points is far from done – it has barely begun – and much better models are needed to address the question [of] what warming level is critical for which tipping point.”

A special IPCC report on climate tipping points was proposed in May by the Swiss government.

Prof Tim Lenton at the University of Exeter, a co-author of the analysis, said: “Since I first assessed tipping points in 2008, the list has grown and our assessment of the risk they pose has increased dramatically.

“Our new work provides compelling evidence that the world must radically accelerate decarbonising the economy. To achieve that, we need to trigger positive social tipping points.”