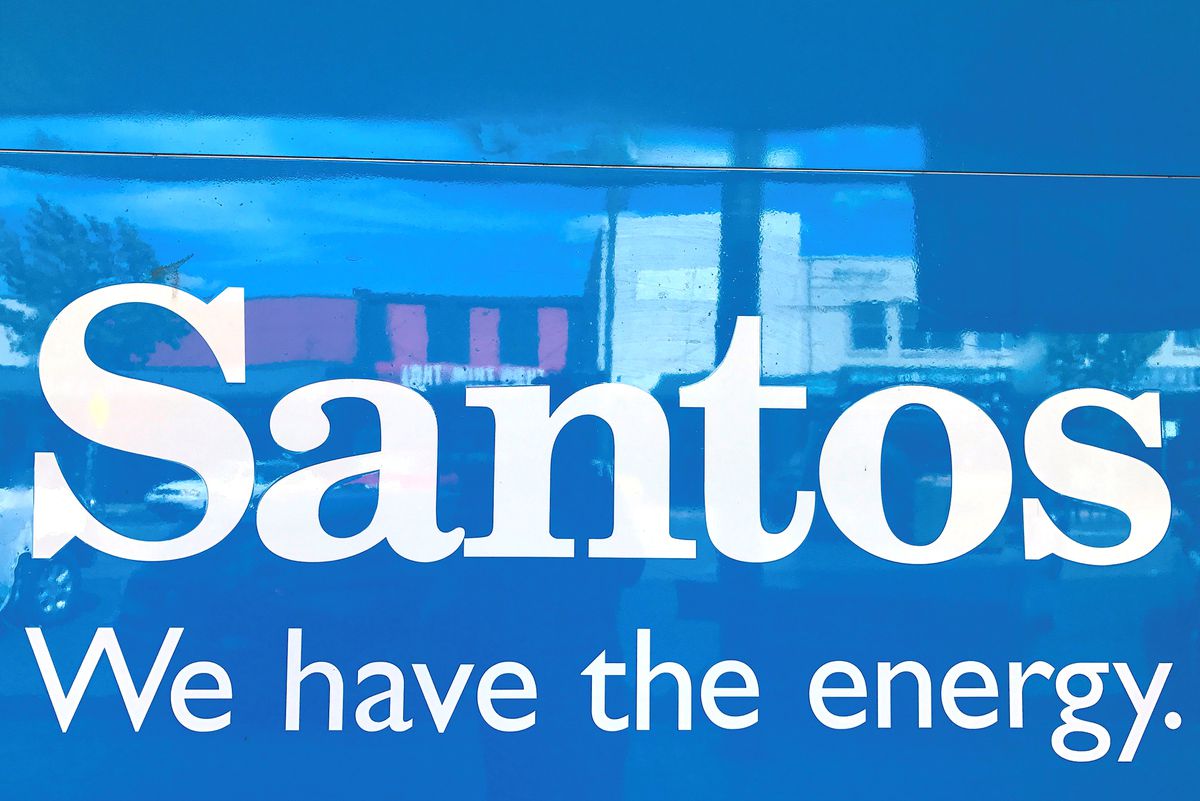 A sign for Santos Ltd, Australia’s No. 2 independent gas producer, is displayed on the front of the company’s office building in the rural township of Gunnedah, located in north-western New South Wales in Australia, March 9, 2018. REUTERS/David Gray/File Photo
The Barossa win: Background and significance
The landmark case is the first significant challenge to an offshore gas approval on the basis that the proponent had failed to consult with Traditional Owners. Senior Lawman Dennis Tipakalippa launched the lawsuit in June, represented by the Environmental Defenders Office and supported by the Environment Centre of the Northern Territory.
Mr Tipakalippa argued that the federal offshore gas regulator should not have approved Santos’ drilling plans given that it had failed to consult the Munupi Clan, which it was required to do under legislation as his clan had interests in protecting their sea country.The Judge agreed.Following the judgement Mr Tipakalippa said“I am the happiest man alive”.The globally significant decision will have wide-ranging implications for Santos’ Barossa gas project, for NOPSEMA, the Australian offshore gas regulator, and most importantly, for the Traditional Owners of the Tiwi Islands and beyond.The judgement sets a new standard for consultation with First Nations communities. The judgement may also have implications for First Nations communities opposing onshore gas development. Consultation will not ensure First Nations people can exercise a right to free, prior and informed consent, but is a major step towards that goal. In practice, it is likely that gas companies will now be required to go and talk with the communities their projects will impact – something Santos refused to do.For Santos, the consequences are severe, however it attempts to proceed from here. From 6 October 2022, Santos will have no approval to drill. It will now have to facilitate the orderly safe shutting down of drilling operations and the removal of the rig. Moreover, a question remains as to the legality of the drilling to date.Santos has already announced it will appeal the decision. If it is unsuccessful, to proceed with the project it will need to redo the entire assessment for drilling, including consultation with Tiwi Island Traditional Owners who have expressed grave concerns about its impact.
This is a landmark victory for Mr Tipakilippa and the Munupi Clan, and a testament to their courage and dedication. A proud Tiwi Island elder, chosen by his clan to protect their sea country, has taken a gas giant to court, and won.

MELBOURNE, Sept 21 (Reuters) – Australia’s Federal Court on Wednesday ruled in favour of an indigenous group’s challenge against a drilling permit for Santos Ltd’s (STO.AX) Barossa gas development, in what Santos called a “disappointing” setback for the $3.6 billion project.

Traditional landowners from the Tiwi Islands led by Dennis Tipakalippa had asked the court in June to overturn drilling approval for the Barossa project near the islands off the northern Australia coastline granted by the industry regulator, the National Offshore Petroleum Safety and Environmental Management Authority (NOPSEMA).

The stakes are high for Santos, which announced plans to seek an expedited appeal soon after the ruling was issued. Barossa is the company’s biggest project, and essential for its Darwin liquefied natural gas (LNG) plant, which will lose supply from its foundation gas source, the Bayu Undan field, later this year.

“Mr Tipakalippa has established that NOPSEMA … failed, in accordance with the Regulations, to assess whether the Drilling EP (environment plan) demonstrated that Santos consulted with each person that it was required by the Regulations to consult with,” Judge Mordecai Bromberg said in his ruling.

“The acceptance (or permission) given by NOPSEMA was legally invalid. NOPSEMA’s decision to accept the Drilling EP must therefore be set aside,” he said.

Announcing its plans to appeal, Santos said the decision should be reviewed by the full Federal Court, given the significance of the decision to the company, its international joint venture partners and customers.

“This is a disappointing outcome,” Santos said in a statement to the Australian Stock Exchange, adding that the relevant drilling was to occur at a site in the Timor Sea about 140 kilometres north of the Tiwi Islands.

“Project approval uncertainty is a public policy issue that should be urgently addressed by Australian governments to reduce risk for trade and investment in projects around the country,” Santos said.

NOPSEMA said it noted the verdict and was considering the implications of the decision. “It is a matter for Santos to consider what the decision means for the Barossa project,” a NOPSEMA spokesperson said in emailed comments.

Tipakalippa, who filed the challenge, said Santos had not properly consulted the traditional owners about the drilling, and told the court that the Barossa project posed a risk to sacred sites and spiritual connection to Sea Country.

“We are so happy and so relieved. We have won. The most important thing for us is to protect our Sea Country,” Tipakalippa said in a statement.

Santos, which had agreed to suspend drilling for the project pending the court decision, said it had “engaged with” indigenous representative bodies – the Tiwi Land Council and the Northern Land Council – about the proposed drilling, and the regulator had accepted its efforts to consult with Tiwi islanders.

Santos was on track to start producing gas from Barossa in 2025 to feed its Darwin liquefied natural gas (LNG) plant.

“The drilling activities are not on the critical path for the project and we have headroom in the project cost contingency,” Santos said.

Credit Suisse analyst Saul Kavonic said if Santos fails in its appeal and has to submit a new environmental plan, that could impact the overall cost and add months or even more than a year to the project’s schedule.

Besides expanding consultations, Kavonic said, there is a risk that the regulator might broaden any review to include other considerations, such as looking at emissions, since the country’s carbon emissions targets are tighter now than when the permit was approved.

The Barossa gas field is about 85 miles off the coast of the Tiwi Islands.PHOTO: MIKE CHERNEY / THE WALL STREET JOURNAL
By Mike Cherney

SYDNEY—An indigenous clan on remote islands in northern Australiascored a legal victory against energy giant Santos Ltd., in a case that could have a wide-ranging impact on how resource companies handle relations with traditional landowners.

On Wednesday, an Australian judge threw out a regulator’s approval of Santos’s environmental plan to drill for natural gas in the Barossa gas field, about 85 miles off the coast of the Tiwi Islands near Darwin. The case was brought by Dennis Tipakalippa, an indigenous leader on the islands who argued the regulator shouldn’t have approved the drilling because Santos didn’t properly consult his clan on its impact.

“Today’s decision puts oil-and-gas companies on notice,” said Alina Leikin, a lawyer with the nonprofit Environmental Defenders Office, which represented Mr. Tipakalippa. “It confirms that the voices of First Nations communities must be heard when their countries and cultures are under threat.”

Elsewhere, a Chilean court this year threw out a government deal for a Chinese company to mine lithium, used in electric-car batteries, ruling that indigenous groups hadn’t been properly consulted. And in 2020, Rio Tinto PLC apologized and executives resigned after the mining company blew up ancient caves significant to Australian indigenous groups.

Santos said it plans to appeal the ruling and would seek fresh approval for the $3.6 billion project, which has financial backing from overseas. It said it is committed to improving its consultation process with indigenous communities, but that the project is important for enhancing jobs and exports and warned that the decision could impact Australia’s reputation as a stable place for foreign investors.

“Project approval uncertainty is a public policy issue that should be urgently addressed by Australian governments to reduce risk for trade and investment in projects around the country,” Santos said.

Australia’s offshore safety and environmental regulator, which signed off on the drilling plan, said it is considering the implications of the decision.

Santos argued it consulted the Tiwi Land Council, a statutory body representing all eight clans of Tiwi people, and held in-person meetings with locals. But Mr. Tipakalippa and other members of his clan, which view the sea near the islands as sacred, said Santos should have had more direct communications with the clan. They also worried the drilling, increased vessel traffic and potential oil spills could threaten local wildlife.

In his ruling, Judge Bromberg noted at one point that there was no indication the land council contacted any other Tiwi Islanders, and that the land council was at times unresponsive, making it hard to conclude the regulator could be satisfied that everyone possibly affected by the drilling had been sufficiently consulted.

Santos doesn’t expect the decision to affect the Barossa project’s budget or timing, though that could change depending on how both the legal case and the new application for regulatory approval proceeds. When Santos decided to move forward with the project last year, it said it was targeting first gas production for the first half of 2025.