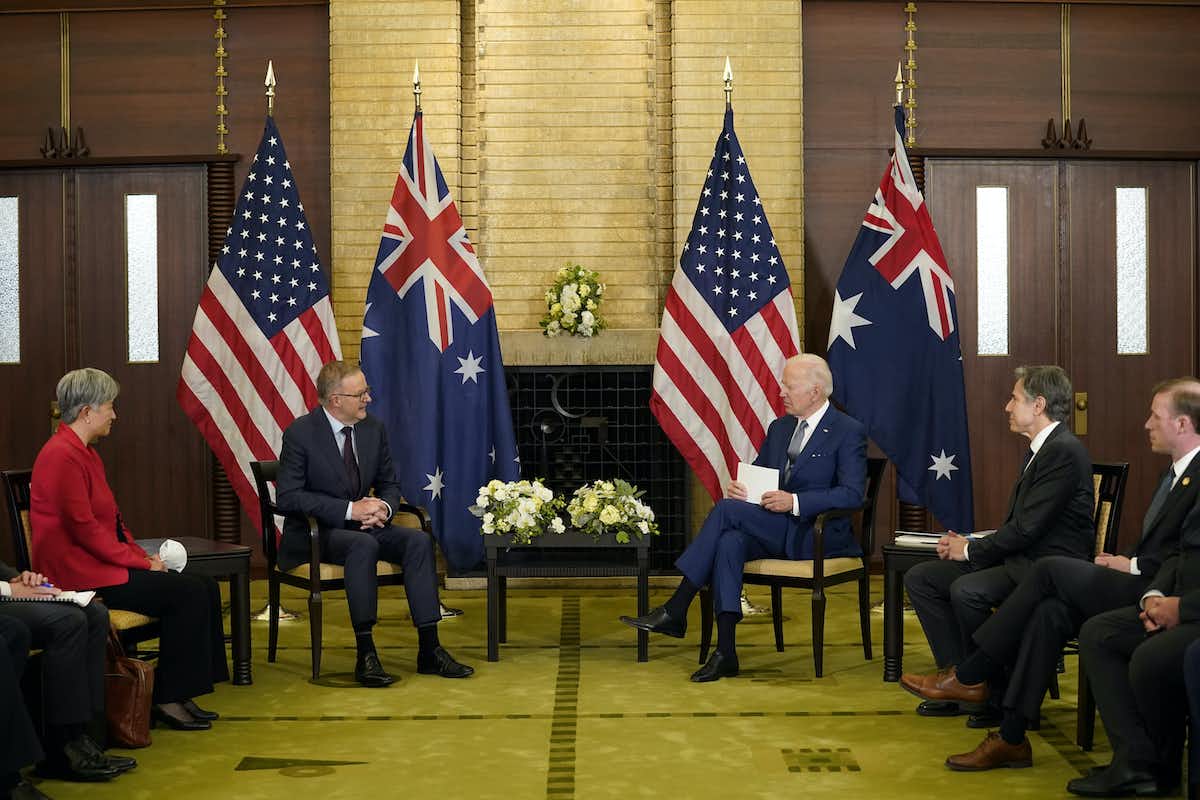 Climate action is firmly on the political agenda in both Australia and the United States, following a recent change in government in both nations. As this year’s Australia-US Ministerial Consultations (AUSMIN) get underway in Washington, the Albanese and Biden administrations appear keen for deeper bilateral cooperation on tackling climate change.

New research has found the political impetus for this cooperation is reflected in the views of Australians. It shows many Australians believe our defence alliance with the US should be extended to include greater collaboration on climate action.

In this respect, the US-Australia Alliance is seen by many Australians as an incomplete project. It’s now time for both the Australian and US governments to turn their rhetoric on climate cooperation into reality.

The shifting sands of climate politics

In August, the Albanese government passed its Climate Change Bill, enshrining into law an emissions reduction target of 43% from 2005 levels by 2030, and net-zero emissions by 2050.

The Biden administration has also passed a number of laws with significant climate provisions. They include new infrastructure laws, the CHIPS and Science Act and the Inflation Reduction Act– the latter billed as the most significant climate legislation in US history.

The outcome of last month’s midterm US elections will, however, hamper Biden’s climate efforts. Republicans now narrowly control the US House of Representatives. This means climate policy will likely be targeted and piecemeal at least until the 2024 US presidential elections.

But the Democrats’ continued control of the Senate still leaves room for progress on climate action. This is most likely on issues with bipartisan consensus such as boosting US competitiveness with China and reducing dependence on Russian oil and gas.

Read more: The US has finally passed a huge climate bill. Australia needs to keep up

Both the US and Australian governments have also recognised the need for deeper bilateral cooperation on climate action.

And in Washington in July this year, Defence Minister Richard Marles reiterated that climate change was “the single greatest threat” to the lives and livelihoods of Australia’s Pacific Island neighbours. He declared “Australia will lift its weight” in response – including by making climate change a pillar of the US-Australia alliance.

Senior Australian and US defence officials have also reaffirmedtheir commitment to “evolving” the alliance – including through better engagement on climate change – to support stability and security in the Indo-Pacific.

What does the Australian public want?

Our research suggests the Australian community also wants to see greater collaboration with the US on the wicked climate change problem.

Polling conducted by the University of Sydney’s United States Studies Centre found climate change was the most important international issue for respondents (57%). It came ahead of security cooperation with the US and Japan (56%), increasing trade and investment in Asia (49%) and standing up to China (48%).

Some 77% of participants said fighting climate change with the US was important for Australia. This view was largely bipartisan: 87% of Labor voters and 73% of Coalition voters said this cooperation was very important or somewhat important.

Respondents aged 18 to 34 were the most likely to support climate action in concert with the US.

This data is backed by qualitative evidence gathered by myself and colleagues Andrew O’Neil and Caitlin Byrne (of Griffith University) and Stephan Fruhling (of the Australian National University). It involved community focus groups across all states and territories in Australia over the last 14 months.

We held 29 discussions with 232 community members to gauge their views on the Australia-US Alliance. The participants were drawn from wide-ranging backgrounds and recruited via a range of strategies to ensure diverse representation.

One key theme to emerge was that climate change is considered an important policy area for the future of the alliance. As one participant said:

There is an opportunity for Australia to use the Alliance for climate change and elaborate on how we define security. I think there’s a shared interest in climate policy and climate security and bringing that into AUKUS. There’s an opportunity to tie that more closely to the Alliance.

Participants broadly expressed the view that the alliance should adapt to new and emerging challenges to remain relevant in the 21st century. As one participant put it:

The Alliance is considered unbreakable so we should see how far it can be stretched.

The alliance needs to be repurposed to address real security threats rather than imagined ones — most significantly the impacts of climate change.

There is a real opportunity now to expand thinking around the alliance beyond binary questions of security and defence, to position Australia as an active peace-builder rather than a reactionary force. Climate action, and leveraging the alliance to pursue it, is central to that.

Climate collaboration is key to an enduring alliance

The Australian government — by itself and in partnership with US counterparts — should inject greater energy into deeper collaboration with the US on climate action.

In opposition, Albanese outlined what that cooperation should entail, saying:

We must develop operational plans to address the natural disasters and humanitarian outcomes. We must study and plan for how other states may seek to exploit its impacts on regional security.

We must develop capabilities and shared responsibilities to mitigate its worst impacts. We should cooperate on technological development to take advantage of the economic opportunity that comes from the shift to clean energy.

As our research shows, the Australian public sees such collaboration is a key to the alliance’s future.