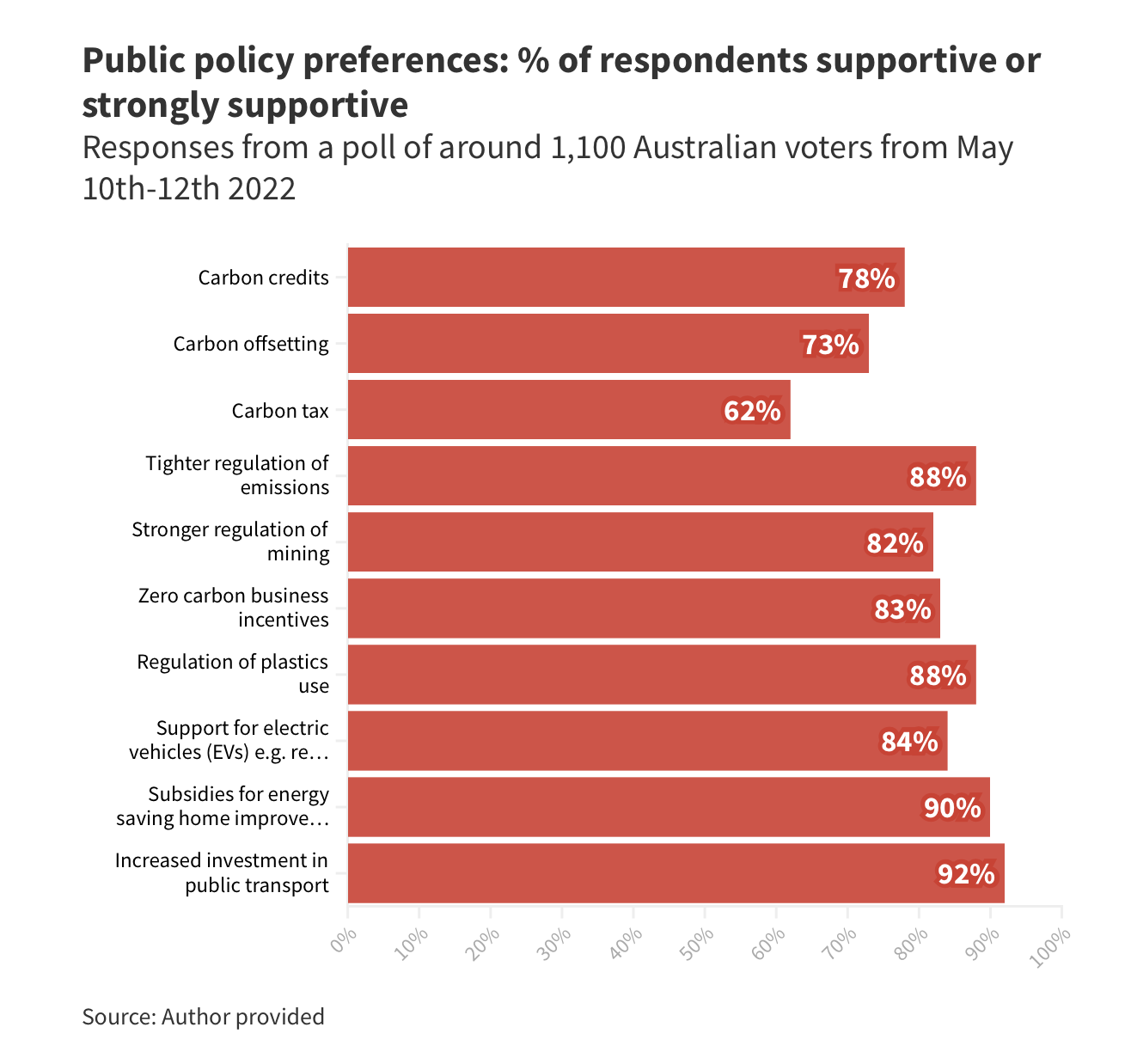 If a week is a long time in politics, three years is an eternity. Since the 2019 election, Australia has endured devastating megafires and unprecedented floods. Meanwhile, news of extreme weather such as India and Pakistan’s horrific heatwaves has poured in. And international pressure to act on climate change is growing.

Perhaps in response, Australian views of climate change have become less partisan. A new poll my colleagues and I organised of around 1,100 Australians found almost 90% now believe climate change is a problem. That’s an average across the political spectrum, from the Greens to One Nation.

Not only that, but almost 80% of us are optimistic, believing it’s possible for Australia to halve its emissions by 2030.

In our 2022 poll, views converged. Now, similar proportions of left- and right-leaning voters rate highly the need for government action on environmental damage and climate change.

What does that mean for this Saturday’s federal election? I can’t say with any certainty, given other issues are front of mind for many people – including the cost of living, house prices and rising interest rates. But the findings do challenge the pervading belief Australians are split on the need for climate action.

What did we find?

And as for readiness to change or help, that’s high across the spectrum too. We found 84% of people would now choose an electric vehicle if they were cheaper than internal combustion engine equivalents, while 95% report recycling regularly and the same proportion believe people should do their bit for the environment.

These results come from our polling undertaken over May 10-12 of around 1,100 Australian voters using a representative sample collected by market research company PureProfile. I asked the same questions on environment and climate change, as well as additional questions, as those included in a poll my colleagues and I conducted just before the 2019 election. The answers uncovered strong feelings about environmental issues – from across the political spectrum.

Of course, political preferences still matter. When we asked respondents what government priorities on the environment should be, we saw marked differences.

Overall, the Greens and the ALP – unsurprisingly – ranked highly on policies to address environmental damage, climate change, renewable energy and threatened habitats/endangered species, with little difference in priority between these four issues.

Those intending to vote for an independent candidate showed similar patterns but with a stronger preference for policies on renewable energy and threatened habitats/endangered species, and weaker preferences around climate change policies.

Liberal Party voters were less concerned about all four sets of priorities, and Nationals voters less so again. Overall, the Nationals voters rated policies around energy and the environment least strongly compared to the other groups of voters.

When we posed questions about the current government’s record on the environment, we found significant dissatisfaction, especially for those intending to vote for an independent candidate. While those planning to vote Liberal ranked the government record relatively highly, the overall energy and environment report card was poor, with respondents giving the government an average of just under 5/10.

We also asked respondents general questions about environmental and energy policies relevant to any level of government. Interestingly, the leading preference was for more government investment in public transport. This was followed by incentives for green homes, for example via subsidies for insulation, with better regulation of emissions and plastics also ranked highly.

Given the political climate wars raging over the last decade, it’s no surprise a carbon tax was the most unpopular preference.

So what should we take from this poll? Voters have become more concerned about environmental issues broadly, and are willing to do their part.

Read more: How do the major parties rate on climate policies? We asked 5 experts

That’s a promising sign, if the next government can use this groundswell to bring in policies that would substantially accelerate our progress towards net zero emissions, and tackle our many other environmental threats.

In recent years, Australia has gained a reputation for dragging its heels on climate action. This survey shows that there is a real, significant appetite for action across the spectrum of Australian voters.

Michelle Baddeley does not work for, consult, own shares in or receive funding from any company or organisation that would benefit from this article, and has disclosed no relevant affiliations beyond their academic appointment.

University of Technology Sydney provides funding as a founding partner of The Conversation AU.

We believe in the free flow of information

Republish our articles for free, online or in print, under Creative Commons licence.