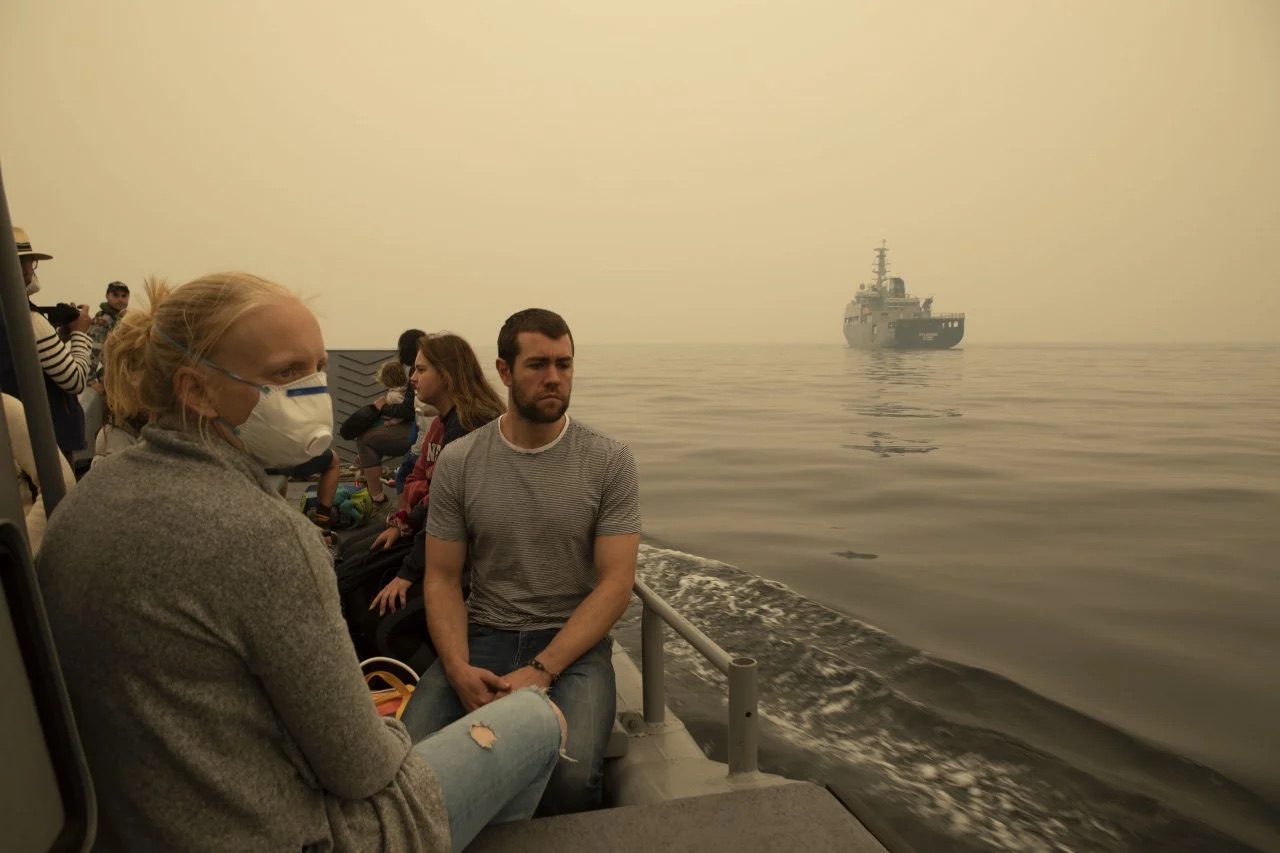 How climate change is impacting health in Australia

Veronique Hamilton is a mental-health nurse working in the Latrobe Valley. Last June, the region experienced severe storms that led to widespread damage, flooding and power outages. Floodwaters shut down the Yallourn coal-fired power station. It was the busiest 24 hours in the history of the Victorian State Emergency Service.

Hamilton recalls supporting a friend who was heavily pregnant and cut off from hospital access by floodwaters. “She arranged for a neighbour who is a midwife to be available in case she went into labour,” she says. “After delivery, she received messages about water contamination – it was so stressful for her.”

Just this week there has been more record flooding across Queensland and New South Wales, with massive displacement, deaths, damage and recovery that could take months. In areas near Brisbane a year’s worth of rain was recorded within just a week.

As health professionals, we are on the front line. We will not ignore the threat of climate change to our patients and communities. We are experts in assessing threats to human safety and determining the most effective intervention.

Simon Judkins is a senior emergency doctor who was part of the response team deployed to east Gippsland in Victoria in the aftermath of the Black Summer bushfires in late 2019, which contributed to 417 deaths across Australia. Homes and forests were destroyed as 4000 Mallacoota residents and holidaymakers fled to the shoreline to escape the flames.

“For days all you could see was thick smoke or bright red sky,” Judkins recalls. “Parents had been on holiday with their newborn babies, celebrating their first Christmas with the grandparents, and two days later they were in the health centre in tears, worrying for the health of their child.”

Immediate health impacts included smoke inhalation, asthma exacerbations and heart attacks. Roads were closed and ambulance helicopters were unable to land. Transporting patients for urgent care was impossible. “What stood out for me,” Judkins says, “was the fear in parents’ faces – a total lack of control.” Now, two years later, “there will be people still having nightmares, who haven’t got their homes or livelihoods back”.

Paul Yates is a specialist geriatrician who was spurred to research the effects of heat on health after witnessing the impacts of the record-breaking 2009 Victorian heatwave. “I was struck by the high number of older, vulnerable people who needed hospital care as a direct result of the heat.” In Melbourne during the past 20 years “extreme temperature events” have increased by 10 per cent each year. His research has found that deaths and emergency department presentations in older Australians were 15 per cent more frequent on extreme heat days at Melbourne hospitals. In raw numbers, that’s nine or 10 extra ambulances arriving every hot night.

The health impacts of the climate crisis are not theoretical, future concerns: they are being seen in our hospitals and clinics here and now. Even in the context of Covid-19, the World Health Organization has declared climate change the biggest health threat facing humanity. Heatwaves, bushfires, floods and cyclones demand an immediate emergency response. Mental health anguish and chronic health complications of displacement follow.

At current rates of climate collapse, water and food security will be under threat and patterns of infectious diseases will change, with tropical diseases such as malaria likely to extend into Australia.

This year we have had cases of deadly Japanese encephalitis, previously only seen in tropical Queensland and the Northern Territory, as far south as Victoria. Like most things, climate-related diseases disproportionately affect the most vulnerable in our community – the very old and young, those with chronic health conditions, and the poor and marginalised.

Burning coal for electricity is responsible for 30 per cent of Australia’s carbon emissions. It is our leading contributor to the climate crisis. Coal also creates massive air pollution, estimated to kill 785 Australians every year, to cause asthma symptoms in an extra 14,434 children, and to cause 845 babies to be born with low birth weight. The annual cost to Australia from mortality related to air pollution is estimated at up to $24.3 billion. Furthermore, ash from coal burning contains heavy metals such as mercury and is dumped in poorly maintained dams with a track record of spills. It is residents of the Latrobe and Hunter valleys who are most affected, and who deserve a just transition to new clean industries to protect their health and financial futures.

Many of Hamilton’s clients at the Gippsland practices where she works are young people concerned about climate. “They have a dark and dismal outlook on life,” she says. “Usually working with anxiety you can do exposure therapy and find more helpful ways of looking at things, but it’s difficult when so much of it is based in reality. How do you get over a fear when the science says we do need to be scared?”

New ways of thinking about “eco-anxiety” have likened it to a form of “pre-traumatic stress disorder” – dread in the face of what is to come. Hamilton shares her clients’ concerns: “I myself decided to only have one child due to the impacts of climate change. It terrifies me to think about the future my child is going to face.”

In the Latrobe Valley, a lack of honest leadership around the future of coal and coal workers’ livelihoods contributes to stress.

“We know uncertainty is bad for mental health. To have good mental health we need to have a sense of control and agency over our lives,” Hamilton says. “The Latrobe Valley has high rates of mental ill health, domestic violence and suicide. We can’t afford rushed and overdue coal closures. The whole world knows coal is on the way out – Loy Yang [coal-fired power station] isn’t going to run until 2045. We know that.”

Coal and gas have served their purpose and are now a hazard. They are the new tobacco. We’ve been addicted and now we need to quit for our health. In our homes and increasingly in heavy industry, everything that coal and gas can do can be done better by renewable electricity – from solar, wind and batteries.

For Judkins, the connection between coal burning and emergency presentations is clear. “Every climate scientist predicted this 20 years ago,” he says. Ongoing inaction and support for the fossil fuel industry is a slap in the face. “These are multinational companies making billions of dollars, getting government subsidies and not paying tax. How is that fair to the people whose lives are being turned upside down by climate-induced disasters?”

Hamilton’s call to action is this: “We know climate change is here.

We need to have open conversations around climate change, acknowledge this is happening and create more resilient communities to prepare for natural disasters. The more prepared and in control people feel, the less likely they are to have mental health impacts after events occur.

Fossil fuel companies and the government need to stop passing the buck and work together to create a transition plan away from coal.”

As health professionals, we are on the front line. We will not ignore the threat of climate change to our patients and communities. We are experts in assessing threats to human safety and determining the most effective intervention – and that’s quitting coal.

This is why the World Health Organization has joined the United Nations to call for an exit from coal by 2030 in developed nations. More than 600 healthcare workers – nurses, doctors, allied health, psychologists and beyond – have signed an open letter from Healthy Futures calling for Australia’s largest polluter, AGL, to switch from coal to renewable electricity by 2030. Ten of Australia’s peak medical bodies, representing 90,000 doctors, have endorsed an urgent transition away from coal and gas to renewable energy across all sectors, and called for a national climate change and health strategy to co-ordinate health-specific climate adaptation and mitigation.

Coal is a rock of solid carbon. There is truly no better form of carbon capture, or storage, than not digging it up and setting it on fire. Last week’s Intergovernmental Panel on Climate Change report confirms the window of opportunity for action is rapidly closing. As individuals, communities, businesses and governments, we need to act urgently. If coal and gas burning continues beyond 2030, we will all suffer the consequences.