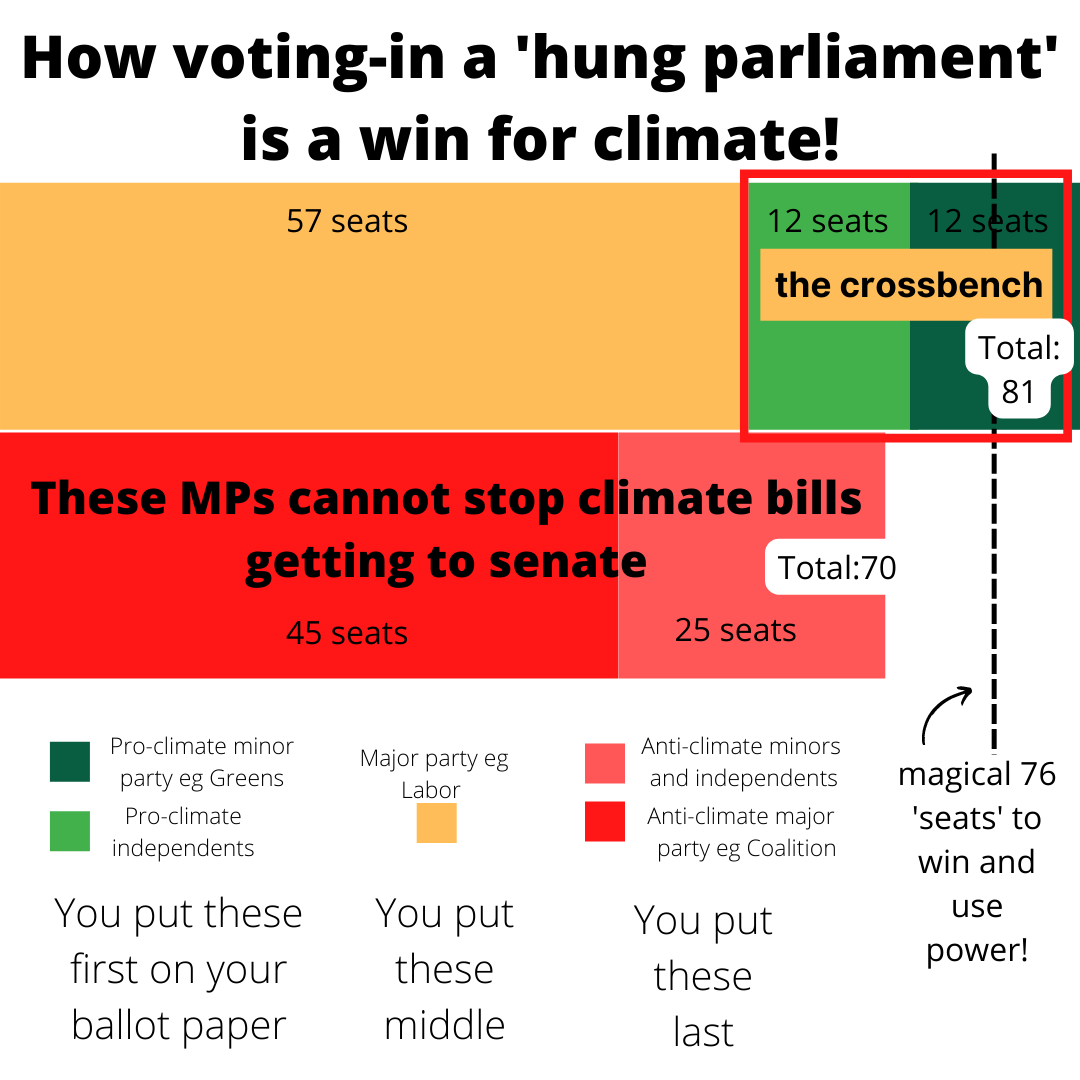 What is the ideal parliament to get climate action?

Of course the ideal parliament after this election would be one which in a bipartisan manner immediately enacts a solid suite of measures to fight climate change (see climate commitment survey or Steggall’s climate bill). Then they can get on to other important business to improve our democracy eg a federal ICAC. That will in turn allow them to do their job on all the other issues that matter in an efficient manner.

If you can think of a party that would not be happy with the above situation they must not get your first vote (“primary vote”).

Unfortunately currently we have the opposite situation. The Coalition, by coalescing, were able to form a majority government and so could prevent any pro-climate legislation getting through. The oppositon (Labor) had next to no chance of fighting climate change.

OK so that helps with fighting climate change but what about the other issues?

Climate action in the form of the sustainable transformation is good for health, jobs, minorities, food and water security, national security, education, in fact just about everything! So basing your vote on a candidate’s climate record makes complete sense. Additionally, most voters now feel corruption is a significant problem in federal government so a federal ICAC would be number 2 on the agenda. All other issues should be much more straightforward to deal with once climate and democracy are back on track.

For almost 70 years governments have held absolute majorities (more than half of the seats) in the House of Representatives. With the general election of 21 August 2010 this pattern was disrupted: a hung Parliament eventuated, with neither the Australian Labor Party (ALP) nor the Coalition of the Liberal Party and the Nationals obtaining an absolute majority—indeed, each side emerged with an equal number of seats. The composition of the House of Representatives after the 2010 election is set out in Table 1 below.

Table 1:   composition of the House of Representatives
following the 2010 general election[1]

There were critics  of how the hung parliament worked (mostly on the losing team) but the parliament did agree to a good deal of important legislation.

Excerpt from The Conversation 2013:

This included the carbon price package; the Gonski school funding arrangements (which has a provision for states not signed up to opt in); the disability insurance scheme (together with an increase in the Medicare levy to pay for it); a means test on the health insurance rebate; paid parental leave; a plan for the Murray Darling Basin; plain packaging for cigarettes; and the establishment of a Parliamentary Budget Office, which is available to cost policies on request.

One of these excellent measures, the carbon price package, lead to a reduction in Australia’s emissions before it was later dismantled by the Abbot Coalition government.

That why this time we’ve got to make climate legislation stick and the best thing we could do is make the desire for climate action so clear with our votes that we get ‘bipartisan’ support for legislation from now on.