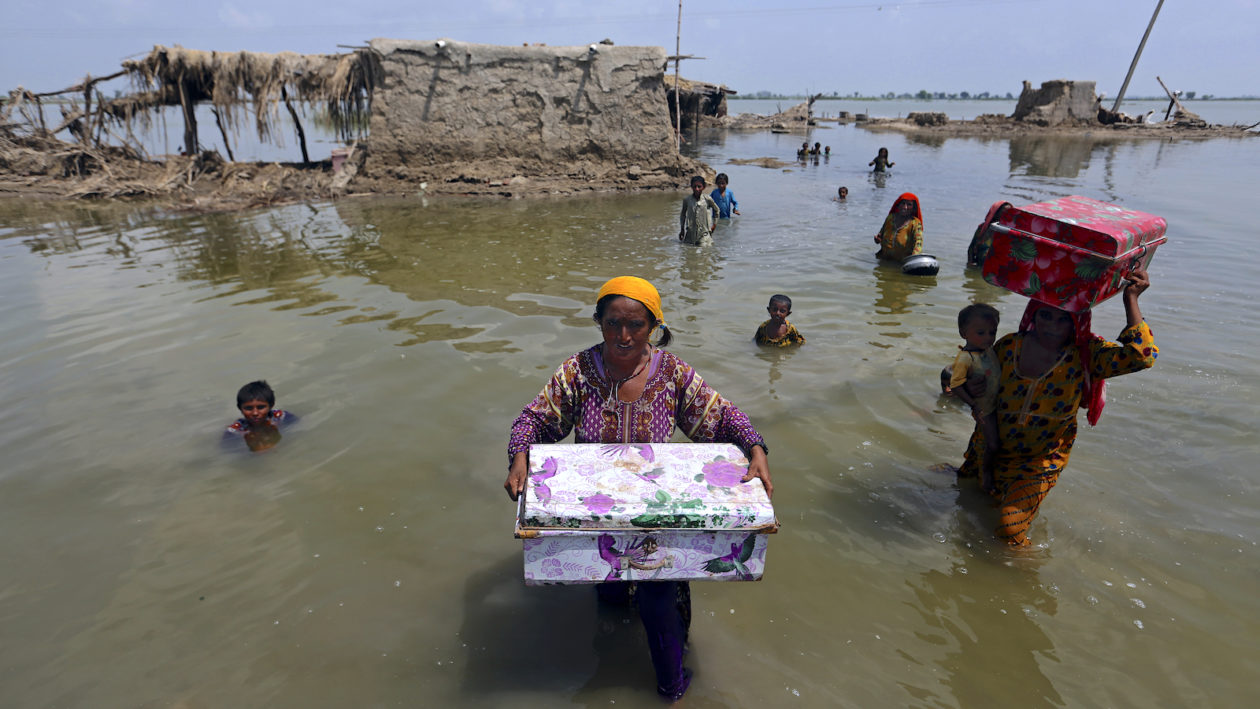 The Philippines, Thailand, Vietnam, Nigeria, Venezuela and Pakistan are among the many countries that have faced extreme downpours and deadly flooding.

Images of cities completely submerged and locals desperately paddling through floodwaters have become ubiquitous, yet no less alarming.

While climate change plays a role in extreme weather events, experts say it is still difficult to determine exactly what the future holds when it comes to rainfall and flooding.

But what is clear is the need to improve resilience.

So as world leaders meet in Egypt for the UN COP27 climate conference, what can we learn from the recent soakings, and what can be done to help countries prepare for a potentially more flood-prone future?

The world under water

When United Nations secretary-general António Guterres visited Pakistan after historic floods in September left one-third of the country underwater, he warned that “nature is striking back”.

The floods — which killed more than 1,700 people — were blamed on what Mr Guterres described as “a monsoon on steroids”, along with melting glaciers in the country’s north.

Since then, Nigeria has also been hit by the biggest floods the West African country has experienced since 2012, killing more than 600 people.

Last week, more than 100 people were killed in landslides and flooding in the Philippines after a severe tropical storm.

While in Australia, NSW registered its wettest October on record and Victoria’s slow-moving flood emergency continues to impact communities in the state’s north.

Andrew King, a climate scientist at the University of Melbourne, said the La Niña weather phenomenon has its fingerprints on many of the world’s flood events.

“Climate change does have an affect on lots of different types of extreme weather, and in terms of rainfall, it really intensifies short duration heavy rain events,” he said.

“The torrential downpours can be a bit heavier because the world has warmed, and the atmosphere can hold a bit more moisture when it’s warmer.”

The global average temperature has already warmed 1.1C above the pre-industrial average.

The latest UN climate change report estimated the world could pass the 1.5C warming threshold in the next five years.

At his opening address at COP27 on Monday, Mr Guterres again urged countries to accelerate the transition from fossil fuels.

“Humanity has a choice: cooperate or perish,” Mr Guterres told the summit.

“It is either a climate solidarity pact or a collective suicide pact.”

Resilience solutions in ‘a bit of a bind’

While there are trends towards worsening flooding in some parts of the world, it is still hard to predict what the future holds, Dr King said.

But regardless of the question marks, he said resilience needed to be a main focus.

“In Australia, we tend to avoid the scale of fatalities that we see in poorer parts of the world,” he said.

“In places like Nigeria, there tends to be a lot more fatalities, unfortunately.

“It really shows in poorer parts of the world there does need to be more resilience to extreme weather.”

Dr Sophie Webber, from the Sydney University School of Geosciences, has been involved in climate resilience projects and planning in Indonesia and across the Pacific Islands.

She said it was difficult to prepare for a flood season in the short-term, which is why Indonesia’s capital Jakarta has been investing in long-term, large flood-mitigation projects.

There have been attempts to clean up rivers to allow more floodwater to flow through and out to sea and construction on large sea walls was underway, Dr Webber said.

There have also been initiatives to move people further away from rivers at risk of flooding.

“Big infrastructure can be quite environmentally damaging in terms of it moving the impacts slightly further away,” she said.

“It can have ecological impacts on things like fisheries and mangrove ecosystems.”

Across the Pacific Islands, where sea walls have had negative knock-on effects on communities and livelihoods, nations like Fiji have been looking at nature-based solutions.

An emphasis has been placed on “soft protection measures” like better intact mangroves, Dr Webber said.

However, as much as these approaches may “sound good and feel good” they may not necessarily be able to withstand climate change.

“There’s a lot of environmental engineering work about how it is generally good at building resilience, but they might not necessarily be able to withstand the kind of super serious impacts of climate change,” Dr Webber said.

“There isn’t a lot of really amazing solutions to increased flooding from climate change.”

‘Debt for climate swaps’ the answer?

One of the main – and most controversial – topics on the table at COP27 is climate change “loss and damage” funding.

Countries least responsible for planet-heating emissions – but hardest hit by an onslaught of weather extremes – have been ramping up the pressure on wealthy polluting nations to provide financial help for damages.

Nearly 200 countries gathering for the COP27 are expected to discuss whether rich nations should pay compensation to vulnerable states hit by climate-fuelled disasters. Part of the discussion is the “debt for climate swaps” approach.

A debt for climate swap is an agreement that allows countries to reduce their debt obligation in exchange for a commitment by the debtor to invest in specific climate projects.

Dr Webber said debt relief is a short-term response that can help countries prepare and respond to flood events.

Huge amounts of debt have left many countries “unable to invest in social and physical infrastructure that might protect against flooding”, she said.

“It also then leaves them in a situation where they can’t afford to pay for the clean-up either.”

The approach isn’t entirely new. It was successfully adopted in Seychelles in 2015 with a $US21.6 million ($33 million) “debt for nature” conversion that went towards marine conservation.

But it has recently been gaining more attention, especially in light of the flooding in Pakistan which cost the country around $US30 billion in damages and economic loss, according to World Bank estimates.

“Millions of people are going into winter without shelter or livelihood,” Mr Sharif said.

“Women and children are still looking to us to protect their basics needs.”

Speaking alongside Mr Sharif, the UN secretary-general urged international financial institutions like the World Bank and leaders at the upcoming G20 summit in Indonesia, to reform policies that govern debt relief to help middle-income countries like Pakistan to focus on rebuilding rather than repayment.

In the lead-up to UN summit, Dr Webber said a lot of work was being done in the Pacific to build a sense of urgency around debt for climate swaps.

While many Pacific nations don’t have high unsustainable debt ratios, it only takes one major disaster “to get really out of whack”.

“If there’s a big cyclone, like a Cyclone Winston-style cyclone, that would have huge ramifications on debt,” Dr Webber said.

“Countries take out loans after a disaster and to try to rebuild, and those disasters can have a huge shock on GDP.”

Dr Melanie Pill from the ANU’s Institute for Climate, Energy and Disaster Solutions said relieving a country of debt can help address loss and damage, but it was not a silver bullet.

“It’s not as easy as just cancelling the debt,” Dr Pill told the ABC.

“Small island developing states don’t just have debt to one country. They have loans from the World Bank and other countries.

“So you would have to have a plan of who’s actually going to cancel that debt, who’s willing to do that, and which country comes first.”

She said there needed to be a lot of planning to ensure the approach benefited communities that suffered the losses and did not get swallowed up by corruption or internal bureaucracies.

“I think it could be something that could be considered, but I think it’s a case-by-case basis … The money would need to be used very strategically,” Dr Pill said.

“There needs to be certain rules around it and I think that is a long process to put into place.”