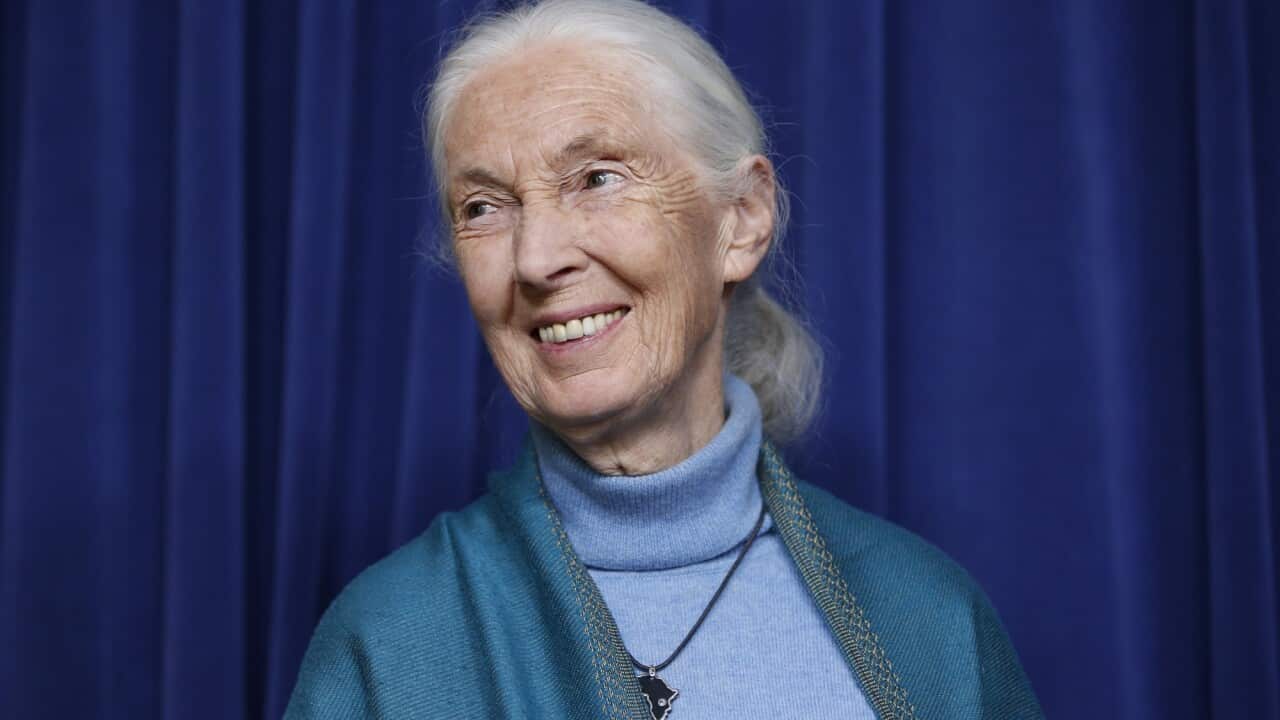 For all humankind’s flaws and destructive behaviours, Jane Goodall believes we can still save the Earth.
The world-leading primatologist has spent decades at the forefront of conservation – from a binocular-wielding young woman in the Tanzanian forest, to preserving habitats and educating communities across the globe.
Now 88, she’s as focused as ever on bettering the planet, wanting to “speed up” rather than slow down while there’s still “so much to be done” for the environment – and everyone has a part to play. “Hope is about action, hope isn’t wishful thinking,” Dr Goodall said via video link at a Museums Victoria Future Forums event on Thursday evening.
Dr Goodall pointed to the loss of biodiversity as among the biggest problems facing the planet, and emphasised its deep connection to climate change.
She likened ecosystems to a “beautiful tapestry”, saying that, when one species of plant or animal disappeared, a thread was pulled from it, and it could ultimately “hang in tatters”.
Poverty and unsustainable lifestyles were among the main drivers of environmental destruction, Dr Goodall said.
She recalled her shock when in the late 1980s she flew over the Gombe National Park, where she started her groundbreaking study of wild chimpanzees in 1960.
What was once part of the great equatorial forest belt stretching across Africa had been reduced to a “little island of trees surrounded by bare hills”.The people there were desperate to clear the land so they could grow food and make money out of charcoal and timber, Dr Goodall said.
“It struck me then if we don’t find ways of helping these people to make a living without destroying their environment, we can’t save chimps, forests, or anything else.”
Dr Goodall suggested people living in urban centres who have more options to consider their purchases should choose the most ethical one.
For example, choosing to eat less or no meat to minimise grazing, and in the case of companies, ensuring their environmental sustainability.
At the root of environmental issues, though, is humanity’s disconnect with compassion, and ending poverty is integral to saving the environment, Dr Goodall said. “I truly believe only when head and heart work in harmony can we attain our true human potential,” she said.

“We better start doing that faster and faster because, environmentally, we’re in a mess.”
Australians have seen the devastating results of climate change through bushfires and droughts, and the resulting desperation and loss of animal life, Dr Goodall said.
But there, too, was the resilience of nature – species coming back from the brink of existence and greenery emerging from the blackness – along with the human spirit.
“This indomitable spirit is in every single one of us,” Dr Goodall said.
“Too often people don’t let it grow, they keep it stifled, they fall into apathy.
“Don’t forget that every day you live, you’re making an impact. Choose wisely, choose ethically – for the sake of the future.”
Pledge Your Vote Now
Change language