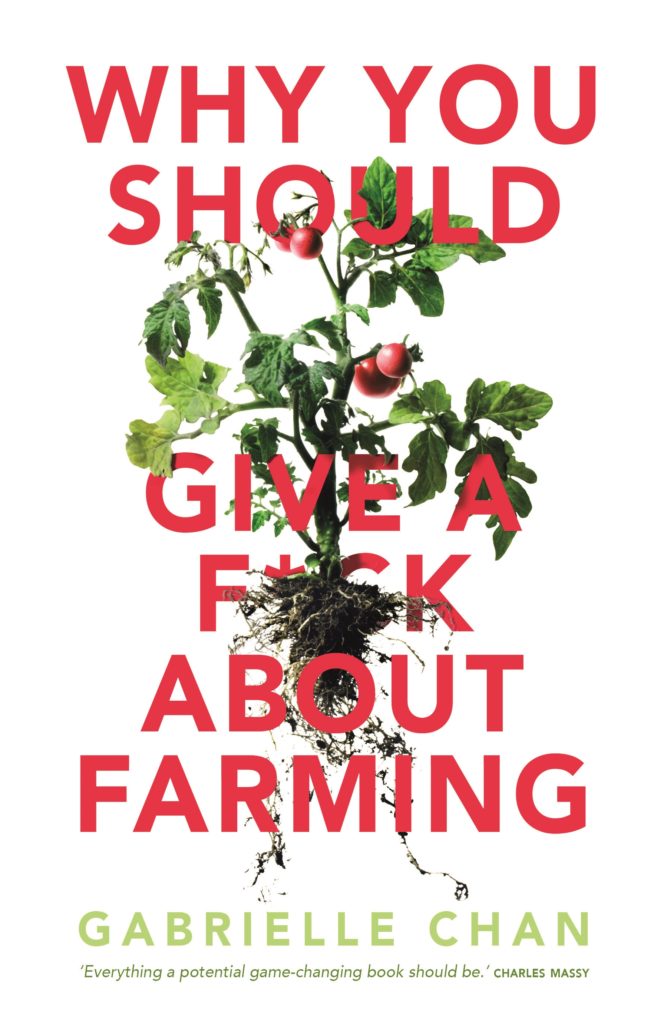 The book puts an emphasis on why farming is a critical part of everyone’s life and exactly why we should all have an interest and care in the farming industry.

Gabrielle raises the point that we must focus on and address the tough challenges that the farming industry faces, if we want to keep sourcing the food we eat and buying the clothes we wear.

Ultimately, whatever the lifestyle, everyone either directly or indirectly has an influence on farming.

An excerpt from the book’s introduction reads; “Eaters will be the ultimate arbiter of where and how food is grown and how the land is cared for … We all have a stake in the future of food and farming. I am going to show you why.”

Gabrielle sheds light on some important changes that are currently occurring in our food system, and where major cracks are appearing.

Farming is at the heart of some of the biggest challenges faced in the world today, as climate change, soil, water, energy, and natural disasters continue to evolve.

The Australian farming landscape is changing rapidly, and Gabrielle wants urgent conversation to start, instead of looking back in coming years and being shocked by the outcomes.

The most fitting thing is that Gabrielle is the perfect author for this book, as she has sat both sides of the fence.

Growing up in Sydney and becoming a journalist for major newspapers, before moving to Canberra to work at the Press Gallery, Gabrielle was a world away from the farming world.

However, after marrying a sheep and wheat farmer in 1996, Gabrielle relocated to Harden to start a new life on the farm with her partner.

“If you had told me thirty years ago that I would be moved to write a book in my fifty-fifth year about farming, I would have said you were barking mad. I literally didn’t give a stuff about farming,” Gabrielle said in the book.

“And then I met The Farmer. I suppose you could fall in love with someone and hate their occupation. I didn’t; I became thoroughly fascinated by The Farmer’s job. “It just gets so much more personal when your livelihood depends on it.”

‘Why You Should Give a F*ck About Farming’ is a realistic view on the industry of farming from a totally balanced and unbiased perspective.

Podcast On ‘Nightlife with Indira Naidoo’

Download Why You Should Give a F*ck About Farming (10.95 MB)

When Gabrielle Chan shifted from the Canberra press gallery to a sheep and wheat farm near Harden NSW, not too far from the ACT, she began to realise that there was a gulf between parliament and the realities of farming life. And so she wrote her first book about it, called “Rusted Off- why Country Australia is fed up”.

Well, now she has written a new book, looking at how farms are facing risks ranging from climate change to soil depletion to future pandemics – all of which could drastically affect the future availability of food and fresh water for the Australian population.

It’s called, provocatively, “Why You Should Give A F* About Farming” and it explores these threats as well as the conundrum of why farm policy-making falls so far short in a nation where over 50% of the country is farmland and politicians, ostensibly representing farmers, sit on the government benches.

Podcast on The Guardian:

Katharine Murphy speaks to journalist Gabrielle Chan about her upcoming book, Why you should give a f*ck about farming. Gabrielle talks about how farming is at the intersection of the world’s greatest existential threats. She also explains how food consumption has become increasingly tribal and polarised, which is very similar to the changes we’ve witnessed in politics over recent years

How to listen to podcasts: everything you need to know