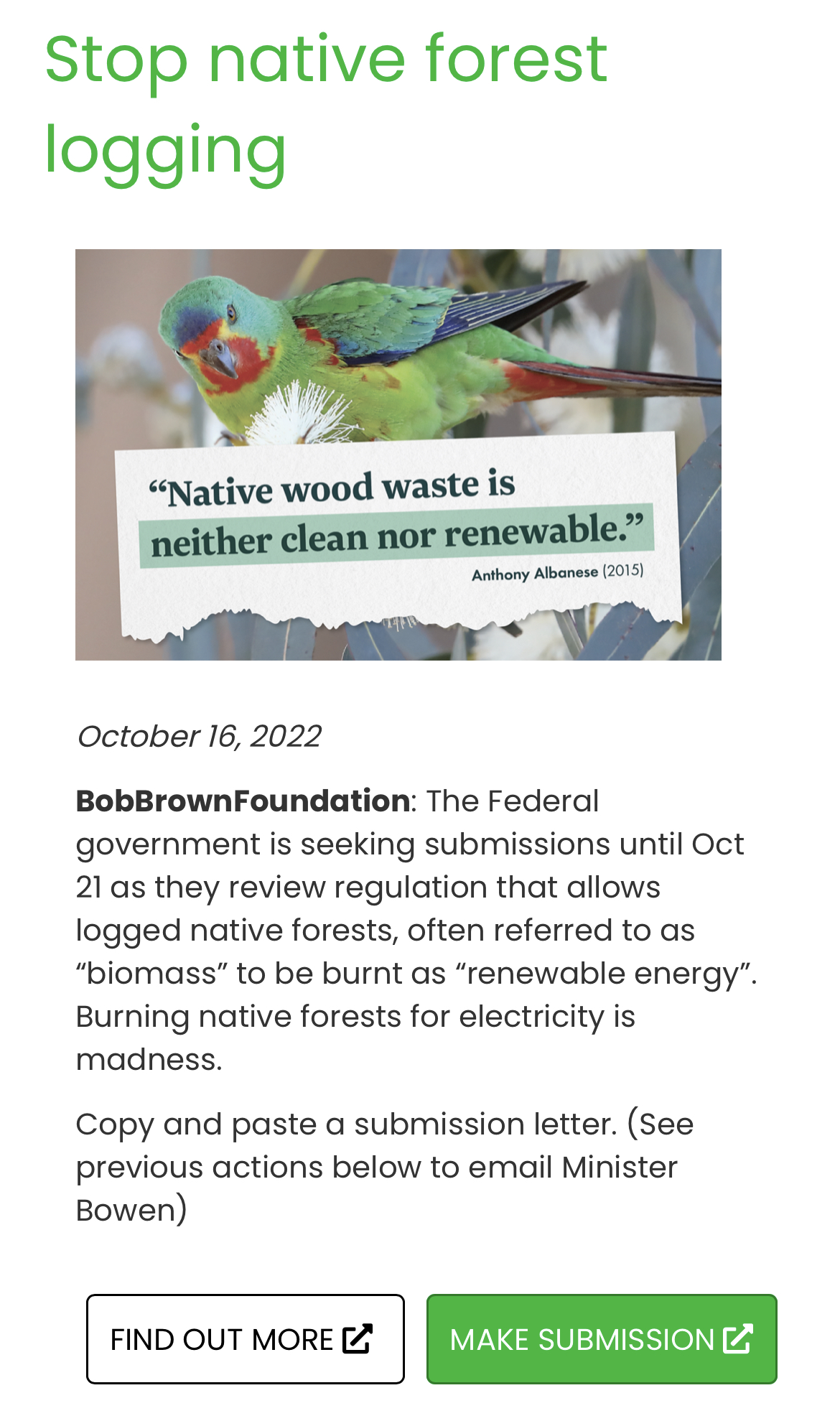 Image: from Vote Earth Now 2 minute actions. In case you were wondering – your submissions worked!

Electricity generated by burning native forest wood waste will no longer be allowed to be classified as renewable energy under a regulatory change adopted by the Albanese government.

The decision, which Labor had promised to consider after it was recommended by a Senate committee in September, reverses a 2015 Abbott government move which allowed burning native forest timber to be counted alongside solar and wind energy towards the national renewable energy target.

The right to burn wood left over from logging to create renewable energy certificates – which provide a subsidy for clean energy generation – was not often used, but conservation groups said it could be an incentive to keep felling native forests. They expressed concern that some power plant owners had plans to start using native forest timber as a supplement to coal-fired generation.

The climate change and energy minister, Chris Bowen, said the change was in step with “strong and longstanding community views” raised in a consultation process that received more than 2,900 submissions. He said the government had put in place “transitional arrangements” for one Western Australian facility that had registered to use timber as an energy source.

“We have listened to the community and acted to address their concerns,” he said.

The Greens’ forests spokesperson, Janet Rice, described the decision as “a major win for the climate, for native forests, and for clean energy”, and said the minor party had secured a commitment the government would reconsider the practice during negotiations over climate change legislation earlier this year.

“Burning wood from native forests for energy is a disaster for the environment,” Rice said. “Pretending it was renewable was ludicrous. The Greens fought hard to end this farce, and we’re glad that the government has worked with us and listened to the community who campaigned hard to end this absurdity.”

Conservationists welcomed the announcement. Christine Milne, a former Greens leader and now patron of the Bob Brown Foundation, said it restored a decision that she, Brown and the Greens had first secured as part of a deal with the Gillard government a decade ago on a clean energy package.

“This decision will buoy the conservation community by providing some hope that the government is starting to listen to the climate and biodiversity science,” she said. “This announcement is a first step towards forest conservation.”

Suzanne Harter, a climate campaigner with the Australian Conservation Foundation, said wood burning should never have been included in the definition of renewable energy. “Eastern Australia was recently highlighted as a global deforestation hotspot. Government policies should not encourage further deforestation,” she said.

“Eastern Australia was recently highlighted as a global deforestation hotspot. Government policies should not encourage further deforestation,” she said.

The native forestry has been under increasing economic and environmental pressure across the country. In Victoria, a landmark supreme court judgment last month found the state logging company, VicForests, had failed to protect threatened glider species and that its methods to check for them before logging were inadequate.

The federal environment minister, Tanya Plibersek, signalled last week the government wanted to work with the states to ensure new national environmental standards it has promised to introduce would be applied to regional forestry agreements, a step that could end an effective exemption for state-sanctioned logging from national environment laws.